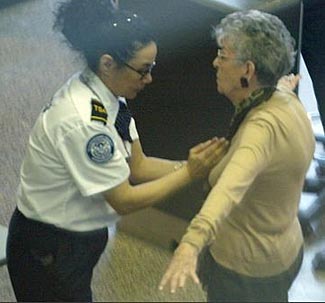 Texas – the Terrorist Friendly State.  That's not a tag line many Texans would expect or want to see.  But it would be an unintended outcome (rather than the primary purpose) of legislation now working their way through the Texas legislature; a pair of bills seeking to ban whole body scanners from airports, and to define TSA style intrusive pat-downs as sexual assault in the state's penal code.

I don't like the X-ray whole body scanners either (but I am quite happy with the other type of whole body scanning that uses much safer radio waves rather than possibly dangerous X-rays), and while I've not yet had to endure one of the new style TSA gropes pat-downs, I'm sure I'd not like one of those either.

Furthermore, neither is particularly effective.  The X-ray scanners can be tricked by a skilled terrorist (see the resource links below), and even the most intrusive of gropes may still miss some items, particularly if internally concealed.

However, and here's the real problem – an attempt to prevent the TSA from using these strategies will detract from overall air travel safety unless the TSA pro-actively replaces these limited-effectiveness measures with broader and more effective measures.

And that's the real Achilles Heel of this misguided attempt by TX to force the TSA to improve its act.  They can't force the TSA to replace this final point defense screening process with broader measures extending way out of the airport – measures that aren't even part of the TSA area of responsibility.  That's what the TX legislators should be most concerned about – improving the overall effectiveness of aviation safety.

And one final comment.  As this article reports, there seems to be a high probability that TX is unable to regulate or control the actions of the TSA, which is a federal agency.

So the legislation may end up being ineffective and a total waste of time anyway – but what else is new?  Or, even worse, if the Texas legislature can prevail and prevent the TSA from using patdowns and body scanners, without requiring them to substitute these procedures with valid alternate procedures, where do you think terrorists will choose to fly from in the future?

The 'new' security risk for airplanes, we are told, is terrorists who smuggle explosives onto a plane with a view to blowing the plane up in mid air.

So we are forced to be electronically stripped naked, and/or given exceedingly intimate pat-down body searches, ostensibly so the security screeners can check if we have any hidden explosives or not.

Unfortunately, this doesn't work.  Here's all that you need to know about the charade we are now all being forced to participate in when going through airport 'security'

Following on from the preceding article about finding hidden explosives, it is clear that our present airport security methodology is totally broken and needs a complete rethink.

Not only do the new scanners possibly give you a dangerous dose of radiation, it seems they can't even find a pistol hidden on your body.

In addition to the practical reality in the previous item, here is information about a scholarly paper that explains why and how the X-ray scanners can be tricked into not 'seeing' explosives hidden in plain sight on our person.