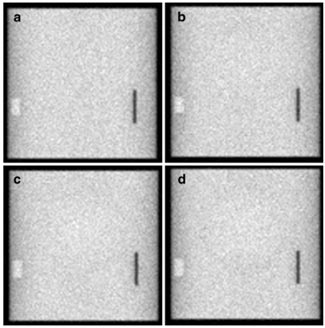 Look at the four airport x-ray scanner images of a person’s body on the left.  One of them has 12 oz of plastic explosive hidden in the middle of the image – can you tell which one?

Until recently, any discussion about the new airport scanners that electronically strip you naked and potentially give you a dangerous dose of radiation in the process has included oblique and vague references to how it still remains possible to smuggle explosives through these machines, and usually refers to how the Israelis have refused to implement them, due to believing them to be ineffective.

But now there’s a scientific paper in the public domain that carefully analyzes these machines and details exactly how to smuggle a block of plastic explosive past a scanner.  And if you’d prefer to smuggle a gun instead, it tells (and shows) you how to do that, too.

The article concludes with the observation that low tech pat-downs could detect the items being smuggled underneath clothing, even though the potentially dangerous and definitely intrusive x-ray machines don’t.

I’m not so sure a pat-down would detect the hidden explosive if taped to one’s chest, although the gun would be dead simple to spot (and also of course would be detected by one of the older metal detectors we used to simply walk through).

But the main part of the article – that a terrorist could successfully conceal a deadly amount of explosive on their person without being detected – is absolutely incontrovertible.

Doesn’t that make you wonder why we are all being subjected to the new hassles, delays and indignities of these new machines, if they don’t work.

Why is the TSA is spending hundreds of millions of dollars buying machines that don’t work?

Here’s an article that interprets/simplifies the scientific paper, and here’s the paper itself if you’d like to read through it and form your own interpretation.