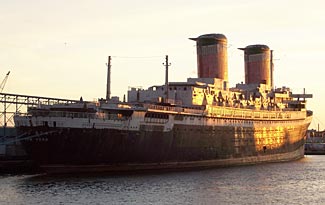 The lovely old ship, SS United States, has been slowly rusting alongside the pier in Philadelphia since 1996, while a small group of enthusiasts struggled to keep up with the rust and decay, hamstrung all the time by lack of funding.

This ship, which started service in 1952, and which set a new record for the fastest trans-Atlantic crossing on its maiden voyage in 1952 – an average speed of 41 mph – faster than most water ski boats ever travel – has ignominiously languished, forlorn and neglected, since being withdrawn from service in 1969.  Various owners with various plans for its future, none realized, have towed it to out of the way parts of the world, including Turkey and Ukraine, prior to it being towed back to the US in 1996.

In 2003 NCL purchased the ship and announced plans to convert it to a 'state of the art, modern cruise ship', to be used on cruises to and from mainland US and Hawaii, but their plans too came to nothing.

The ship continued to slowly decay.  Much of its interior was ripped out and sold in 1984 to pay off creditors.  Last year, NCL decided it was time to quit itself of a ship that was costing about $800,000 a year in docking and related fees, and which it could sell for cash.  NCL received offers of up to $6 million for the vessel from scrap dealers, but NCL very graciously agreed to sell it for half that price to the SS United States Conservancy, a group of enthusiasts hoping to preserve the ship in some form or another.

Probably to everyone's surprise, the group managed to find the money both to buy the ship and also to cover the ongoing docking fees for a future 20 months, thanks to a generous contribution from a local millionaire who pretty much single-handedly provided the needed cash (discussed in the blog here).

But then a problem arose – the EPA was worried about the ship having toxic PCB chemicals in it, and the cost of removing those threatened the viability of the entire project.  Fortunately there has been some type of solution developed for that, and the ship has now formally passed into the ownership of the SS United States Conservancy.

But now this once lovely sleek ship is in another race – this time to be repurposed into some type of viable ongoing role prior to the 20 months of funding expiring.

It seems there is no thought of restoring the ship to sailing condition, even though the hull is in apparently good condition.  Instead, it will take on some type of role similar to that of the Queen Mary in Long Beach, permanently moored somewhere in a combined hotel/conference center/museum/tourist attraction type role.  There is 650,000 sq ft of usable space on the ship (about as much as in the Chrysler Building), much of which will of course need extensive alterations and renovation to become acceptable for any future purpose.  The new owners are full of fanciful plans; all of which seem to require massive millions more in funding and participation of various other partners to create shoreside facilities to complement the ship.

So we view this as far from guaranteeing the ship a new secure future.  After 42 years of false starts and disappointments, who knows what will happen next.  We wish the ship and her new owners well, while not being too sanguine as to the future.