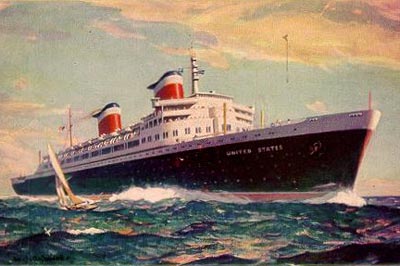 There’s some potentially good news for ship preservationists and for this country’s maritime history.  The passenger liner SS United States, which had been threatened with sold for scrap by its present owners, NCL, may now be saved.  NCL has agreed to sell the liner to a preservation group for $3 million, a very fair and generous move on NCL’s part when you consider that the ship had received offers of almost twice that by scrap dealers who wanted to simply break the ship up for its scrap metal value.

The preservation group scored a last minute donation in excess of $5 million which saves the ship for now, but it will need to come up with a plan to cover its ongoing costs – not the least of which is a ridiculous $60,000/month in docking fees.

Many places in the US and elsewhere in the world spend millions of dollars a year to promote themselves as tourist destinations.  They want tourists to visit and to spend money in their bars, restaurants, stores, and everywhere else.

But Rockland, ME, is of a different mind.  The town wants to increase the fee it charges cruiselines per passenger they land in Rockland up from $1 to $6 per person.  But least we think this to be a ridiculous act, the Mayor explains ‘We are not discouraging the cruise ship industry. We just want to be very proactive and make sure we are doing the right thing for everyone involved, citizens, fishermen and the town itself’.

His list of ‘everyone involved’ seems to conspicuously not list cruise lines or their passengers.  He says that cruise ship visits and the passengers they bring create costs for the community and its infrastructure.

Most cities would welcome tourists.  But apparently not those in New England.  Rockland’s increase from $1 to $6 is just catchup – Bar Harbor currently charges $8 and Portland charges $9.

So when you see an inexplicable and hefty port charges add-on to your cruise fare, now you know how some of that is made up – by greedy communities that are very ready and willing to take your money every which way, not only through their retail outlets but also by charging you for permission to set foot in their city to start with.

One of the big rip-offs in the world today is bottled water.  How often have you seen three things side by side – bottled water, bottled sodas, and a drinking fountain (eg at a Disney theme park).  As often as not, the bottled water will cost as much or more than the soda or beer or whatever else, and, again as often as not, may have come from nothing more special than a city water supply to start with.

Taking the rip-off to a possible new level is Crystal Cruises, who are looking at bottling their own water (both still and sparkling) on their ships and selling it.  They see a potential for a million bottles of water a year.

Does this mean the water that comes out of the taps on a Crystal ship is not safe to drink?

Good news for those of us with Wi-Fi equipped phones, iPads and computers.  As of yesterday, all Starbucks stores now offer free unlimited Wi-Fi.

While the Wi-Fi might be free, some stores are becoming increasingly negative about giving away the electricity to power a laptop or other device (even though the cost for eg two hours of powering a laptop is likely to be only one or two cents).  So perhaps this news about pending enhancements to how Wi-Fi works that might allow for the battery drain related to Wi-Fi to be reduced as much as five-fold is very timely.

If you’re planning to get a passport this summer, rush to lodge your application in the next ten days.  On 13 July, the price of a passport will go up to $110 (an increase of $35) plus a $25 ‘execution fee’ (the mind boggles as to what that might be!).

If you’re reading this from outside the US and planning a visit here for which you’ll need a visa, you might want to urgently apply for your visa, too.  Most visas and other consular services will also go up in price, with some visas doubling in cost.