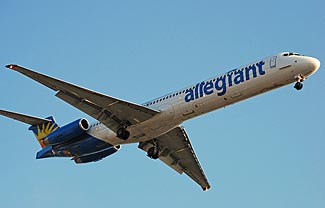 According to this story, Allegiant plans to increase the seats in its MD-83 planes from 150 at present up to 166 seats.

Currently the planes have thirty rows, each of five seats.  Adding 16 more seats would be three extra rows, plus one mystery additional seat to be added who knows where.

Let's think how this would work.  As you can see on Seat Guru, there are 22 rows of seats in front of the fixed emergency exit row seating, and five rows of seats behind, one row of which is also somewhat fixed due to the exit doors behind it.

It seems probable that all three extra rows of seats (let's forget about the mystery one extra seat) go in the front part of the plane.  And let's say that Allegiant takes out the lavatory and galley up front, which probably represents about 40 linear inches of space.

No other US airline has less than 30" of seat pitch in its jets, and only Alaska/Horizon goes below that (to 29") for some of the seating on its short haul Q400 turbo-prop planes.

Only one other airline in the world has a seat pitch of less than 29" – the UK discount airline, Monarch.

Now about that mysterious one extra seat they are adding.  No – surely not?  Could it be they are now selling the jump seat in the cockpit, too?!