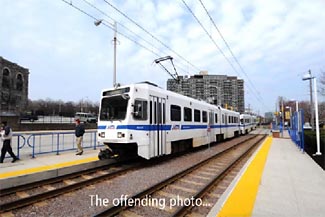 What part of ‘there is no law against taking pictures of trains’ does the Maryland Transit Authority police not understand?  This isn’t rocket science, and these people are specialist transport police.

Look at this video showing two (then subsequently three then later on, four!) bullying transit police lying through their teeth and inventing laws that don’t exist, and referring to the need to get ‘approval’ and a ‘vetting process’ including showing identification and an ‘interview process’.  Another delightful quote is ‘nobody is allowed to take pictures on state property’ and ‘since 9/11 no-one is allowed to take pictures of any type of railway conveyance, plane, airport, or anything like that’.

These are all outright lies and there is no possible way the officers could be mistaking the laws, because there are no such laws.  And the officer citing most of these lies isn’t a rookie new hire, he is a sergeant.

A bit further in to the video, the police then start bullying the photographer, telling him it is illegal for him to record them.  They then spend a time holding a hat in front of the camera lens.  They are as wrong about that as they are about every other claim they make.

Finally, when they let him go, one of the officers follows him to the Amtrak station he is traveling to and gets the Amtrak police to ask for his ID too.

This article has a video report including interviews with the MTA’s Administrator who displays ill concealed mirth while making some insincere statements.

The MTA Administrator concedes that ‘more training may be called for’ but in attempting to justify the unjustifiable, says ‘our officers have become very sensitive post 9/11′.

What part of bullying, illegally detaining, and lying every which way is being sensitive?

Oh – and as to how it is the MTA Administrator is insincere?  If you play the short video clip to the end, you’ll see that the ACLU has been struggling with the MTA for five years to get them to acknowledge there are no laws preventing private citizens from filming their trains and stations.  And while the MTA Administrator himself admits that to be the truth, in five years this dirt simple fact has yet to be conveyed to their police.

How can this be so?  There can only be one answer – that the MTA has decided to deliberately turn their backs on the law of the land, and are acting in violation of the law, in an unaccountable manner.  It is so simple – so blindingly simple – to explain to their officers ‘Hey guys, we have to leave people alone if they are taking photos of our trains and stations’.  Why has this not been done?

So – who is to be held accountable for this police harassment?  Who is to lose their job?  What negative consequences will flow from this to any MTA employee?

The actions of the police sergeant and at least three other officers is reprehensible in a free country.  But the true outrage is that no negative consequence flows from this, and there is every likelihood the same police officers will continue to lie and harass in the future, the same as they have in the past.

1 thought on “‘Very Sensitive’ Police Lie Through Their Teeth, Bully and Harass Innocent Photographer for 48 Minutes”