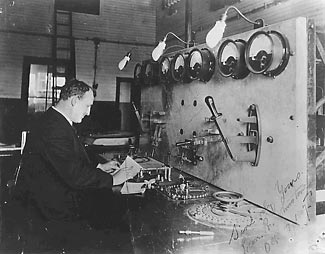 It is possible I may have struck a slightly too gloating tone in my article about cell phones being bad for your health a couple of days ago, but as long time readers know, this has been a consistent theme of mine, alternating between references to studies that confirm there is indeed some linkage between cell phone usage and various ailments including cancer, and frustration at short sighted testing, often sponsored by companies with a vested interest in the research outcome.

On the other hand, the findings of a weeklong meeting of 31 scientists from 14 countries, convened by the International Agency for Research on Cancer, and based on reviewing hundreds of studies, is a major step forward towards acceptance of the dangers caused by cell phones.  Read below for the report’s findings and six small changes you can make in your life to reduce your exposure to cell phone radiation.

Soon we’ll have to start waiting for ‘the other shoe to drop’.  Guess what – the Wi-fi router you have at home?  And all the Wi-fi devices that connect to it?  And the one at the office?  And the ones everywhere else?  They use more or less the same frequency of radiation as your cell phones (and as your microwave ovens).  The level of radio wave pollution that exists everywhere in our lives continues to escalate enormously, and just because we can’t see, touch, taste, smell or in any other way sense the radio frequency energy being soaked up by our bodies 24/7 doesn’t mean it isn’t there or possibly harmful.

Is it time to start wearing tinfoil helmets?  Quite seriously – maybe so.  We are dosing ourselves with slow acting radiation that may take 20 or 30 or even 40 or 50 years to make its results felt on us.  What’s that, you say?  In much less than 50 years time, you’ll be dead (and, alas, almost certainly me to).  Well, that may be so, but what about your children and grandchildren?  One thing studies do seem to agree on is that if there are any harmful impacts from radio waves, they are stronger in children than in adults.  Who among us doesn’t wish for more than 50 healthy years for our children and their children?

But mixed in with all the morass of cancer statistics is a sense shared by many that cancer is more prevalent today than it was formerly.  This is true of animals, too – most of my dogs ended up dying of cancer, and many (former) dog owners have confirmed cancer as the cause of their dogs’ deaths too.

It would be an extremely inappropriate step to try and correlate any one factor with the possible increase in cancer rates (even assuming that cancer rates are increasing), because any such increase may well be a result of many different and unrelated factors.

But think back to the history of radio waves, and – perhaps even more relevantly, the history of very high frequency (I don’t mean VHF, I mean 1 GHz and above) radio transmissions.  They are a surprisingly recent phenomenon.

Marconi first transmitted radio signals a mile in 1895 (a 1907 radio transmitter is pictured above), and Nikola Tesla was creating radio signals at least a couple of years before that.  These were very low frequency and low energy.

Radar waves first started to be placed in limited use in World War 2.  The first household use of high energy radio waves came with the advent of microwave ovens (although these are generally well shielded) in the early 1960s.

Cordless phones were probably the first household radio transmitting device.  Cordless phones first started appearing around 1980, and back then they were low frequency (around 1.7 MHz).  They became increasingly more common and used increasingly higher frequencies in the years that followed.  In 1994 they were licensed to use 900 MHz and in 1998 they were allowed to use 2.4 GHz.  In 2003 they were then given space in the 5.8GHz spectrum.

Wi-Fi started to be released from about 1999, with frequencies above 2GHz.

Cell phones themselves were initially in car devices, or in satchel bags you’d carry.  The first portable phones had short battery life and were not things we always had with us.  The Motorola MicroTac phone was the first ever flip phone that had pretensions to being able to fit in a pocket, and it was released, at a cost of some thousands of dollars, in 1989.  It operated at sub- 1GHz frequencies.

More recently too – say the last 5 years or so – they have added extra transmitters and higher frequencies to support 3G, 3.5G and 4G data services as well as voice service.

My point is that until less than 50 years ago, high energy radio waves were very uncommon.  It is only in the last 20 years that cell phones have started to become increasingly common, and it is only in the last ten years that we’ve been adding many other sources of high energy radio energy into our lives as well.  It may still be too soon for the effects of all this new radiation we have introduced into our lives to take effect.

In the article I wrote, below, I regularly referred to our evolving appreciation of the dangers of cigarette smoking as an analogous situation.  There’s one more analogy that applies – the dangers of cigarette smoking were also masked by the resulting development of lung cancer being a long and slow process.  Some people can smoke for 30, 40, even 50 years and not get lung cancer.  Most people can surely smoke for 10 or more years without risking their lives.

So now we are in the same process of just starting to get the amount of usage history needed to comprehend the possible dangers of high frequency radiation.

I hope I’m wrong and that there is no danger.  But it strikes me as hypocritical in the extreme that the various government agencies that are out there to protect us from all sorts of real and possibly imagined dangers set ridiculously low levels of exposure/tolerance to all sorts of other chemicals and require drug companies to go through sometimes a decade or more of testing before being allowed to introduce a new drug; but the now universal prevalence of cell phones and the radiation they emit has been allowed with nothing more than an FCC ‘maximum power’ restriction.

Maybe the very least the FCC could do is to publish not just a single maximum power rating, but a table showing a combination of maximum power and maximum hours per day of exposure.

But this is extremely unlikely to happen.  The most plausible reason why?  No-one would like the answers given!