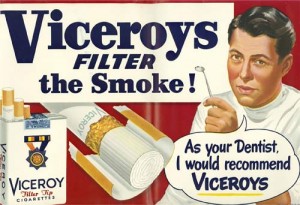 For as long as I’ve been writing The Travel Insider, I’ve been waging a lonely war, trying to convey the danger that cell phones pose to our health.

This has not been easy, and I’ve frequently compared it to the perception of cigarettes in the 1950s.

Back then cigarettes were promoted as being healthy, and were even sometimes prescribed by doctors for, amongst other maladies, chest problems!  The few people who expressed concerns found themselves shouted down by the multi-billion dollar tobacco companies, and the vast majority of the population were complacently addicted to nicotine and didn’t want to discover any reasons to feel bad about their ‘glamorous’ and ‘healthy’ habit.

Now of course, it is hard for us to countenance how anyone could have ever doubted the link between cigarettes and lung cancer, and the decades of successful delaying action by the tobacco companies have finally given way to universal acceptance and understanding that cigarettes are unequivocally bad.

Keep that in mind when thinking about cell phones – the modern version of a cigarette dangling from our lips is the phone glued to our ear.  Instead of tobacco companies, we now have the wireless companies and the cell phone hardware manufacturers, and instead of the widespread and socially accepted practice of smoking, it is the probably even more widespread and accepted practice of owning and using a cell phone.

There are few things most of us would be less willing to give up than our cell phone, and with each new version of the iPhone or Android smartphones, the case for ownership becomes more compelling, and the number of hours a month we spend using either the voice, the texting, or the data services increases.

But just as, in retrospect, it seems kinda sorta obvious that inhaling smoke into your lungs would never be good for them, so too may it seem, in retrospect, laughably obvious that carrying what are portable microwave ovens and transmitting microwaves into the side of our heads, and carrying them on the sides of our hips, or in our shirt pockets, is a bad thing.

If you put meat or bones into a microwave oven, you know what happens to them.  Are we slowly cooking ourselves, too – and, if we are, what are the effects on our bodies and our brains?

Until now, the official answer has been ‘Oh no, of course nothing bad is happening’, offered up with a generous side dish of ridicule to anyone daring to suggest there may be cause for concern.

Now think back to the cigarette analogy again.  The tobacco companies sponsored any number of pseudo-scientific research studies, all ‘proving’ there was no link between cigarettes and lung cancer (I wonder what sort of negative censure or outcome was visited on the people that conducted these studies and authored their findings so confidently, assuring us it was perfectly safe to go on puffing at cancer sticks?).

Guess what.  At present, we’re in the stage of the process where there are very many studies being offered to us ‘proving’ that there is no link between cell phone usage and any deleterious health effects.

And just like with the cigarette studies, there have been occasionally studies that do seem to suggest there are possible dangers and negative consequences to using a cell phone, and indeed the FCC for decades has set maximum permissible radiation levels for phones (which seems to imply that bad things happen, at least if more powerful phones are used).

But there’s been no universally accepted ‘smoking gun’ to cause the paradigm shift, at least, not yet.

As of yesterday, one of the most credible seeming of the naysayers was the World Health Organization.  Cell phones are perfectly safe, they assured us.

Today, they changed their mind.  And in doing so, perhaps this marks the turning of the tide in general.

The WHO announced today that radiation from cell phones can possibly cause cancer, and grouped mobile phone use in the same carcinogenic hazard category as lead, engine exhaust and chloroform.

But wait – there’s more.  Just like cigarettes can do a great deal more damage than ‘only’ lung cancer, Dr. Keith Black, chairman of neurology at Cedars-Sinai Medical Center in Los Angeles added ‘So in addition to leading to a development of cancer and tumors, there could be a whole host of other effects like cognitive memory function, since the memory temporal lobes are where we hold our cell phones’.

And CTIA – the cell phone industry association?  What do they have to say about this?  They said the WHO announcement ‘does not mean cell phones cause cancer’, and further pointed out, although why this should detract from the validity of the WHO announcement is unclear, that ‘WHO did not conduct any new research, but rather reviewed published studies’.  An almost exact copy of the former responses and protestations of the tobacco industry.  As Yogi Berra said, ‘It is deja vu, all over again’.

Here’s an article with a bit more about this issue.

So, what should you do?  Even I’m not going to throw away my cell phone.  Here are six simple things you can do.

1.  Don’t give up your land line.  Any time you place a call, try and use a regular wired phone (not a cordless phone), and if someone calls you on your cell phone and you’re close to a regular phone, ask if you can call them back or if they will call you back on the wired phone.  This one action can massively cut down the hours you spend on wireless calls.

2.  Consider sending text messages rather than making phone calls.  Typing (and reading/receiving) a text message keeps the phone away from your head.

3.  Try and keep cell phone calls short.  Use them for priority transfers of information, not for low priority gossiping.  This too will massively reduce the amount of air time you use.

4.  When you do use a cell phone, do so with a headset – either a Bluetooth headset (which uses a hugely less powerful transmitter than a cell phone) or a regular wired headset.

5.  Try and carry your phone away from your body, and don’t always carry it in the same place.  Your phone is transmitting all the time, ‘talking’ to the cell towers, and receiving data too.  Each extra inch you can move the phone away from you will result in an appreciable lessening of exposure to the phone’s dangerous radiation.

6.  At night, either turn your phone off or leave it in the bathroom.  Don’t sleep with it close to your head.

9 thoughts on “At Last – Vindication. I Was Right; Everyone Else (Almost) Was Wrong. Cell Phones Truly Are Bad For Your Health”