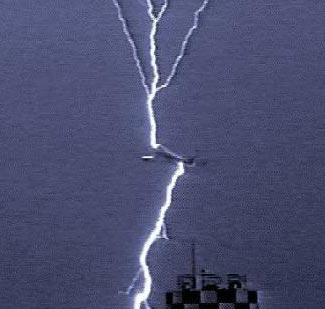 A recent article points out that the airlines' ban on having portable transmitters operating in a plane is often being ignored/overlooked by people with Bluetooth headsets.

That is very true, but why stop there?  An increasing number of devices have Wi-Fi transmitters in them too.  Most laptops and tablets now have Wi-Fi built in, and so too do many eBook readers and even some MP3 players (as well as possibly Bluetooth also).

How is it that a plane can be safely struck by bolts of lightning, comprising hundreds of millions of volts and tens of thousands of amps, but if we should turn on our tiny postage stamp sized iPod Nano, we may make the plane suddenly twist out of control and crash and burn?

And what about the so-called FAA requirement that we have to turn everything off before the plane is allowed to push back?  Is this really an FAA requirement?

I've just released a detailed article that attempts to rationally look at the potential risks of using portable electronics on flights, and also investigates what those FAA rules really truly are.  Go have a read. My findings may surprise you.

9 thoughts on “Do Our Portable Electronics Really Interfere with Airplane Safety? Does the FAA Care?”