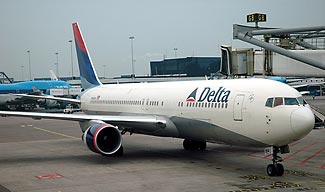 We've been struggling with definitions this week.  On the global stage, there's a new war that's maybe not a war; closer to home, there was the reader survey from last week – are Delta's actions again Frontier fair competition or not?

You can see the background to the survey here (page down once or twice to get to the Reader Survey heading); but in quick summary, hot on the heels of Frontier announcing new service between Minneapolis and Kansas City, Delta announced a series of new flights to start from Kansas City too; all slated to start on the same day (6 June) that Frontier's new service would start to MSP, and all on routes currently unserved by Delta but served by Frontier.

As you can see from the results below, 79% deemed this to be a malicious act on Delta's part.  48% said that it must be stopped, the other 31% said that there was no way to stop it. 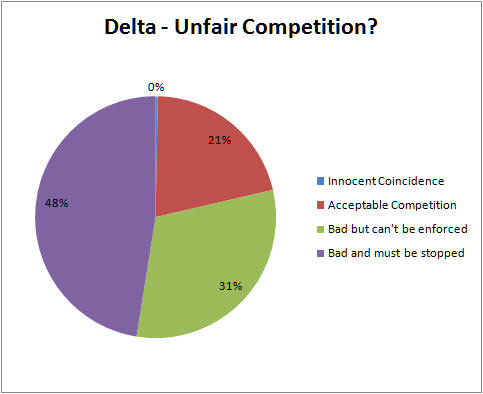 I don't understand the one reader who said it was an innocent coincidence!

One in every five readers thought this to be acceptable competition.  I disagree, for two reasons.  First, the aviation industry is not a competitive industry.  It is an oligopoly, and – to make matters worse – it has anti-trust immunity.  I write about the lack of airline competition here, in a four part series published in March 2010.

It is relevant to keep in mind that since I wrote that analysis in March 2010 we've seen United and Continental merge, Republic, Frontier and Midwest merge, and Southwest and AirTran have a merger pending final regulatory approval (AirTran shareholders okayed it earlier this week).

Four out of every five readers already agree with me that Delta's actions areunacceptable competition, but they are split 5:3 with almost half believing that, although bad, there's nothing that can be done to prevent such abusive actions.

Maybe these people are more grimly realistic about the repeatedly demonstrated ineffectiveness of the DoJ and DoT to police the airlines and their actions.  But the fact remains that we – the fare paying passengers – are being harmed by the actions of the oligopolistic airlines, not just in the specific and very narrow example of the flights out of Kansas City, flights which probably impact on very few of us, but in other ways as well, and we should insist that the federal regulators start regulating as they are supposed to be doing.

Would you like an example of how you are being harmed on the next flight you take?  That's easy.  Look around you on the plane.  The chances are it is almost full.

And the reason it is almost full?  The airlines seem to have possibly established some sort of unwritten, unspoken gentleman's agreement between themselves that they will all fill their planes way higher than before, and they won't go after competing airlines when they see their flights as full.

Back in the 'good old days' (as brief, uncertain and ephemeral as they were) if an airline saw another airline operating a route with 85% load factors, they'd think 'hey, there's an opportunity for me to add some flights and take some of those passengers away from my competitor', and they'd do just that.  The willingness of airlines to compete on routes was described in lobbyist's code as 'an over-capacity problem' in the industry.  We as passengers saw it as a happy situation meaning the middle seats were always empty.

After a series of false starts, and after a series of consolidations past the point of oligopoly (this transition occurred when Delta and Northwest merged, putting us, for the first time, over a 50% concentration among the four largest players), guess what?  No more 'over-capacity problems' for the airlines, and no more empty seats for us.

Meanwhile, the airlines march together lockstep when it comes to setting fares, general terms and conditions, and extra fees.  With occasional mild exceptions (eg Southwest with its two free checked bags) none of the airlines choose to respond to the other airlines other than by mimicking them and doing exactly the same thing.

One last comment about the specifics of Delta's actions.  Delta has now said it will reduce its summer domestic capacity by about 3%, which makes it all the more odd that it is adding all these new flights on routes with little linking in to the rest of their network, but which just happen to currently be served by Frontier.

Oh, talking about the ineffective DoT policing airlines, it is now ten days since I emailed the DoT asking for their opinion on the BA fares that were advertised on BA's website but not available.  So far, no response.

Maybe it all is an honest error on BA's part (but it would be nice for them to admit that).  They will sometimes say that errors may occur.  For example, BA are saying a 'system error' caused them to erroneously charge flights from Japan at rates ten times higher this week than they were a week earlier.

With the earthquake, tsunami and radiation problems, flights out of Japan have been desperately sought after, which makes the timing of this error rather, well, unfortunate.  If you have a suspicious mind.

BA said the ten times increase in fare was due to a system error because previously direct flights had a stop in Hong Kong added to their schedule.  I can't start to think how adding a stop in HKG could increase a Japan – London fare ten-fold.

What with accidentally charging people ten times more than the correct fare, and air fare sales that don't exist, along with rampant fees for every possible thing related to traveling, it is no wonder that the US Air Transport Association says that February was the fourteenth month in a row that their airline members enjoyed increased revenue.

Overall, they said fares are up 13% compared to a year previously.

I've given back most of the spare rooms for the Scotland tour in June.  If you've been thinking of coming on this but haven't yet communicated with me about this, please let me know as soon as possible, because it is no longer a 100% guarantee I can fit you onto the tour.

Here are two somewhat contradictory articles.  The first – the happy making one – says that with hotels enjoying a return to profitability, they are now starting to selectively spend more on guest amenities again.

The second predicts that hotels will follow the airlines and start to charge fees for things that used to be taken for granted as being included.  In the case of hotels, this could be housekeeping services.

I don't think many of us change our sheets and pillow cases every day at home, so I've never understood the expectation that they should be changed daily when we're in a hotel.  And I bet if we had to pay $20 or more per room servicing, our perceived need for a daily change of bedlinen and towels would quickly evaporate.

Lastly this week, I'm advised that there are still some of the discounted noise cancelling headphones available for sale.  Details here.