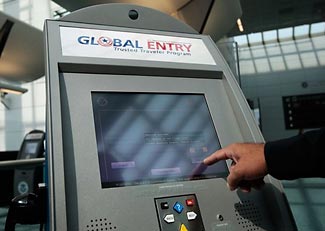 A report was recently released by a self described 'Blue Ribbon Security Panel', co-ordinated by the US Travel Association, and comprising various heavy-hitters, with the self-imposed mission of reviewing current airport security issues and recommending improvements.

The panel came up with a number of recommendations, ranging from the impossibly idealistic (to improve the preparation and awareness of travelers so they get through security with fewer problems and hassles – in other words, an acceptance of the claim that security delays and problems are all our own fault) to the extremely unlikely (suggesting the DoT make it mandatory that all airlines allow one checked bag free of charge) to the bureaucratic (giving the TSA expanded powers over matters like priority lanes into security) to the actually incredibly sensible.

The incredibly sensible recommendation reads like it came from my series 'Alternatives to Present Airport Security'.  It is a suggestion that the TSA stops treating all passengers as if they pose equal levels of risk.  This takes the form of reviving the occasional public and private sector attempts at creating a 'Trusted Traveler' program.

Until now, although sometimes paying notional lip service to supporting the concept, the TSA has assiduously resisted implementing a Trusted Traveler program.  Which is surprising and unfortunate, because it is so enormously sensible to consider; presenting them with a win-win.  They don't hassle ordinary honest 'safe' Americans, improving the overall image of the TSA and air travel in the country, and they free up resources to concentrate more carefully on people who truly might pose a threat.

The report does some interesting calculations, and suggests that during the twelve months May 2007 – May 2008, 41 million fewer people traveled by air within the US than otherwise would have done so, due to people disliking the security experience so much.  The panel equates this to a loss of $9.4 billion in income to the airlines, plus additional losses of $5.6 billion to hotels, $3.1 billion to restaurants, and a loss of $4.2 billion in tax revenues to federal, state and local taxing authorities.

There's precious little reason to hope for the government caring too much about loss of revenue to airlines, hotels, and restaurants (although it might make more visible meaning to them if this was translated into job losses), but surely an annual loss of $4.2 billion in tax revenues will encourage our political leadership to sit up and take notice.

These numbers are trending up.  A new survey using 2010 data suggests the reduction in traveling due to unhappiness with security now costs an overall annual $84.6 billion in spending, and represents a loss of 888,000 jobs.

Are we 68% safer in 2010 than in 2004?  There is of course no reason to suspect that the TSA are doing any better now than they were then, with reports regularly surfacing about the continued alarmingly high levels of test guns and explosives successfully smuggled through airport security.

Besides which, if you look back to 2004, the TSA was claiming then, just the same as it does now, that they were effectively protecting us.

Even with these huge budget increases, the report points out that the TSA continues to consistently fail to achieve its own self imposed goals in terms of how quickly people pass through security lines (a failing the TSA attempts to obfuscate and blur).

As regards the concept of trying to create a trusted traveler program, this could be easy and almost instantaneous.  The report points out that there are already large populations of people who could be immediately admitted to such a program.

They list five categories of people who could be immediately trusted, ranging from people with current security clearances graded secret or higher, through airport workers who currently can pass into the secure sides of airports without screening (think about the logic of that – while at work, these people can go about the airport, in and out of secure areas, with no screening, but when they're traveling somewhere, they then have to take their shoes off and shuffle through the metal detector to get to where they could get without any screening if still at work).

Also included would be active law enforcement officers, people who have already been granted a TSA 'Transportation Worker Identification Credential' (a bit like airport employees), and those of us who have been approved for US Immigration trusted traveler programs such as NEXUS, SENTRI and FAST.

That is overwhelmingly sensible, isn't it.  The TSA could start a trusted traveler program tomorrow, and instantly have some millions of people participating.

Unfortunately the report then suggests that trusted travelers should pass first through a biometric reader (such as pictured above) to verify the trusted traveler's ID and then through an explosives detection machine – a 'sniffer' as they have been popularly called.

I say 'unfortunately' because in-airport live trials of these sniffer machines found them to be unacceptably unreliable and they have all been withdrawn from service.  So the report is strangely calling to adopt a technology that has been already tested and which failed.

Bottom line :  The report of this panel points out the runaway costs of the TSA's growing bureaucracy, costs which are unmatched by any improvement in the airport security experience for its 'customers' – us, the traveling public.  If anything, it seems the more the TSA spends, the worse the experience for us as travelers, and the more we cut back on our traveling.

The biggest cost of all is the cost to the economy as a whole as a result of people avoiding flying whenever possible due to their dislike of the TSA screening experience.

The report comes up with various recommendations, the most valid of which is creating a trusted traveler program.  There already are, to varying degrees, trusted travelers out there but who are not allowed to short circuit some of the unnecessary security screening.  A formal trusted traveler program could not only greatly enhance the travel experiences of all of us, but could also reduce the overall cost of the TSA while allowing them to more effectively concentrate on passengers of greater potential risk.

Will anything come of this report?  Probably not, alas.  You can see their full report here.

The next item reminds me of one of the truly classic lies of all time, right up there with the check being in the mail.  I'm thinking of the lie 'We have improved our product's quality control and reliability so much, that we no longer need to offer as long a warranty period'.

In this case, the TSA says there is no need for its employees to wear radiation dosimeters around their X-ray scanners, because the TSA has tested the machines and knows they are safe.

The American Federation of Government Employees is even offering to pay for the cost of dosimeters itself, but the TSA says its employees are only allowed to wear official dosimeters issued by the TSA, and the TSA refuses to buy these and issue them.

The union has also volunteered to conduct an independent study of the radiation emissions and leakages from these machines at its own cost, but the TSA has refused to allow this, too.  There is, after all, no need – because the TSA has already tested the machines and knows they are safe.

One has to wonder – if the TSA is so absolutely confident about the safety of these machines, why are they so adamantly refusing the reasonable requests of their employees to monitor the radiation to which they may or may not be exposed?