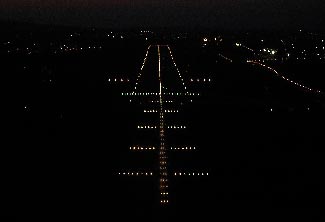 There's been a lot of headlines and a lot of outrage about an air traffic controller who fell asleep a couple of nights ago.  But was this truly a life threatening situation?

It seems that just after midnight on Tuesday night/Wednesday morning 23 March, a couple of incoming flights to Reagan National Airport in DC were unable to contact the airport control tower.  There was apparently only one controller on duty, due to the airport having very little traffic in the night hours.

The pilots tried radioing him on the usual frequencies and got no response, so they contacted a regional air traffic control center, who then tried to telephone the controller and again got no reply.

So the pilots adopted standard procedures for landing at an uncontrolled airport and did so, without further bother; an AA flight at 12.10am and a UA flight at 12.25am.

It subsequently seems that the controller was simply soundly asleep and failed to wake when the incoming radio calls arrived, and also didn't hear the phone ringing.

This has upset and worried many people.  FAA Administrator Randy Babbitt said he was outraged and 'determined to get to the bottom of this situation for the safety of the traveling public' – which is a wonderfully bureaucratic comment to make, because the situation 'the controller fell asleep' doesn't seem to need much further investigation, even for a high level government official to understand.

Transportation Secretary Ray LaHood said 'It is not acceptable to have just one controller in the tower managing air traffic in this critical air space' and directed an immediate increase in staffing to two controllers.

Uninformed commentators who alas have the ability to make their opinions heard have spoken about the risk to passenger lives.  Others have worried, saying 'What say the air was filled with planes hijacked by terrorists?'

And of course, there has been a rush to criticize a situation where there is only one controller manning a control tower at a time of day when there are almost no incoming or outgoing flights, and calls to now add a second controller at all times.

Let's cut through the posturing and the hypocrisy.

First, there was as close to zero risk as is measurable by the controller sleeping.  All the guy does, if he is awake, is act a bit like a traffic cop when the stop lights are not working.  He sequences and stages the planes down onto the runway (and up off it again).  He doesn't give any minute by minute instructions like 'you're too high, go down a bit; you're too slow, speed up a bit', he basically tells the pilot which runway to use and when to use it, and that is that.  (Okay, so there are some simplifications here, which some readers will pick up on, but go with the flow please, and agree with me that this is 95% or more of what the guy does in low traffic night time hours – and of course, feel free to post more detailed commentaries in the comments below.)

Usually there are additional controllers at the airport who sequence the planes on the ground, before take-off and after landing.  So the sleeping controller was merely in charge of the last few (or first few) miles of each plane's flight.  With probably no other planes within ten minutes of the approach to Reagan National, there was no danger of mid-air collision.

So it was unfortunate the controller was not helping the two flights, but not really a heart-stopping challenge for the pilots.  Think back to the stop light analogy – if the lights are broken and there's no policeman on duty to direct the traffic, you simply treat it as a four-way stop.  That is a hassle and everyone slows down in busy traffic, but at times of very light traffic, it is actually better than having the traffic lights, because you never get stuck on a red waiting a long time with no other cars in sight until your turn for a green.

As for 'what say there were terrorist planes attacking Washington' – what exactly would an airport controller do if awake?  Tell the terrorists they weren't authorized to crash their planes into buildings?  That would be a big help, wouldn't it!  The airport controllers have no role to play in defending against an airborne attack on DC, and if one were underway, their prime job would be to stay silent and not confuse things.

Now, let's look at the hypocrisy of the comments being offered.  Just like how the police chief in Casablanca is shocked to officially discover that there is gambling at Rick's, so too must our officials now be officially shocked at being confronted with what, if they had any competence and knowledge of their duties, they surely would already know.  Single controller shifts are nothing new at all, and have even been the subject of past controversy.  Does Secretary LaHood not know this?

And controllers cat napping is one of the open secrets of the industry.  Furthermore, guess what – most of the policy makers and managers responsible for air traffic control issues at the FAA are former air traffic controllers themselves.  It seems reasonable to believe that either they used to cat nap themselves, too; or if they did not, at least they knew their colleagues and co-workers did.

Do we really need to spend millions more dollars a year adding a second controller to shifts at airports which currently only have a single controller?

These controllers generally work in an 'interrupt driven' manner.  That is, they start controlling a plane when the plane calls them up, and says 'Hi, here I am, it is your turn to look after me now'.  The plane will have been controlled by a different controller, either while in the air or on the ground previously, and when the flight transitions to the point of now becoming this controller's responsibility, there is a formal handover process, which for the controllers in question is always initiated by the plane, not by them.  At times of low traffic, it is probably acceptable to merely make the phone ringers louder and to have a radio activated squawk device that also wakes them up when they are called.

If firemen can sleep in the firehouse while on duty waiting for a call, why can't air traffic controllers also sleep while waiting for an arriving or departing plane?

Alternatively, if it is deemed by the 'zero risk' brigade that we must have them awake and alert all the time, even if there is nothing going to happen for the next hour, why do we need an expensive qualified air traffic controller to act as a very expensive companion/monitor?  Why not either have an automatic system that tests for and assists wakefulness, or a low paid staff member who is responsible for keeping the controller awake.

There's one other solution to this 'problem' too.  There are three major airports around DC (BWI IAD DCA) – why not centralize the air traffic control for all three airports into one central facility, and limit the at-airport staff to only those people who need to maintain visual direct contact with planes on the ground?  That way, instead of having, in the slow hours, perhaps 5 staff over the three locations, most of whom are massively undertasked, you could make do with two or three staff at a central location, providing a better standard of service overall.

Lastly, if the air traffic controller who fell asleep does lose his job over this, how about making some of his supervisors accountable too.  How about, even, adopting a 'the buck stops here' approach and making Messrs Babbitt and LaHood accountable for what they are both apparently claiming to be outrageous mismanagement.

3 thoughts on “Air Traffic Controller Falls Asleep – Should We Even Care?”