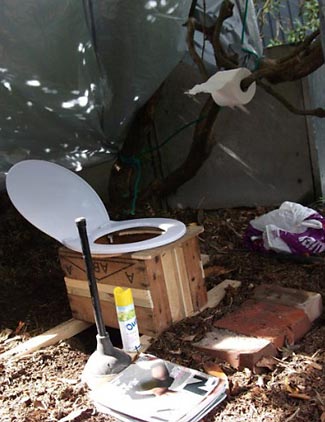 As you probably know, Christchurch in New Zealand suffered a devastating earthquake a couple of weeks ago, and only a few months after an earlier major earthquake in September.

Although little damage occurred in the September 2010 quake, the February 2011 quake has destroyed much of central downtown Christchurch, and the death toll is inexorably rising and expected to exceed 200.  The total cost of repairs will probably exceed US$10 billion (to put that number in context, New Zealand has a total population of 4 million).

Most of the city’s residents lost power for a period of time, although this has been largely restored.  Fortunately, it is summer in the southern hemisphere, so it wasn’t as though residents had to endure short dark days and severe cold.

Of greater inconvenience was probably the loss of water.  Think this through.  You’ll first think – ‘Oh no, what will I drink?’.  Then you might think – ‘Uh oh, no showers or baths for a while’.

But there’s a much bigger challenge confronting you.  No water to flush your toilet with, either.  So maybe you can manage in some way or another (we don’t need the details) for a day or two, but after a week or two, this becomes increasingly a challenge.

New Zealanders have always prided themselves on being resourceful and self-reliant.  And so, harking back to an earlier age when this was all people had, many Christchurch residents have embarked on a construction program of building ‘long drops’ – outside latrines that comprise little more than a hole in the ground, something to sit on, and some sort of privacy screen.

Perhaps the most resourceful of all NZers, however, is the person who created a new website to allow people to showcase pictures of their new ‘dunnies’ or long drops.  And so, in all its glory, is the website, http://www.showusyourlongdrop.co.nz/ (note – it can be very slow to load at times; clearly it is extremely possible).

Please enjoy a showcase of the best of home ingenuity, and some of the awful pun names given to the pictures.  You can even vote on which ones you feel to be best.

And if you’d like to contribute a dollar or two to the Earthquake appeal, here is the official NZ Government Appeal website.