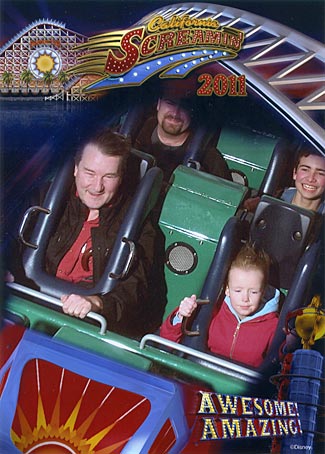 Disneyland and the adjacent California Adventure were fun last week, and happily the weather was bad, so the vast hordes of people who would have otherwise been present were greatly diminished, as were the lines for the rides inside the parks.  That meant we got to do some rides as many as four times in a row, much to my daughter's delight; I told myself it was better to be doing things four times in a row than standing waiting to do them once.

I'd not really explored the newer California Adventure theme park much in the past.  It is right next to Disneyland where they formerly had the car park, and opened in 2001, and I was pleased to spend more time there this time.  The California Screamin' roller coaster is one of the best I've gone on – extremely smooth and not at all rough or jerky, while also being satisfyingly high speed, complete with a loop the loop as well as all the other standard twists and turns.  This year Anna was tall enough to ride it, and after some misgivings, she enjoyed it too.  Repeatedly.

The other great experience was Soarin' Over California.  This is a truly stunning video presentation that recreates the sensation of flying at low altitudes over some of the scenic beauty spots of California, and is a wonderful feel good experience.

To my astonishment, California Adventure also sells some wonderful micro-brew IPA and other beers by the Karl Strauss micro-brewery (although they say they'll only serve two beers to each guest).  That was definitely an adult bonus.

California Adventure also has a fun vertical ride, the Twilight Zone Tower of Terror.  We did that last year and Anna couldn't be enticed back onto it again this year – last year the vertical drops were so massive that my phone levitated up and out of my shirt pocket, then crashed mightily to the floor when the ride slowed and stopped.

And then there is the Grizzly River Run – one of those awful water/rafting experiences designed to splash as much water as possible over the raft's occupants.  We only got slightly wet the first time, so had to do it a second, getting somewhat wetter, then Anna insisted on a third visit, which got us absolutely soaked to the skin.  And then the sun disappeared, and the not very warm but at least sunny afternoon quickly transitioned into a cold and windy evening.  Brrrr!

My Disney narration would not be complete without a de rigueur moan about the prices of everything.  This year's 'smoking gun' was a six color pen.  It was in various of the Disney souvenir stores for $5.95, which I thought was probably an acceptable amount to pay for a pen with six nice colors of ink, and I bought one.

After leaving Disney that evening, we walked outside the park, and stopped at the hotel's store to buy some fixings for breakfast the next morning.  The hotel store was full of Disney souvenirs as well, and you know you don't get any bargains inside a hotel store.

But there was almost the same pen – the only difference being the hotel store's pen had a necklace/loop thing on it as well.  Oh, there was also one other difference.  Even though the hotel store was selling a pen with an extra option (the neck loop braid), it was able to sell it for $2.95 instead of $5.95.  Half price for a better pen.

Shame on Disney for the merciless exploitation of their 'guests'.  I often wonder if that was what Walt had in mind when he first designed and opened Disneyland, touting it as a family friendly fun experience.  There's nothing family friendly about spending $50 for a basic lunch for four people, and twice the price for the same souvenirs as can be had directly outside the gate in an expensive hotel gift shop.

A two day 'park hopper' ticket allowing you to visit both California Adventure and Disneyland costs $161 for adults (which Disney defines as everyone 10 and older) or $146 for 3 – 9 year olds.  So the typical family of four can look to spend perhaps $629 for admissions, $300+ for food and drink over two days (more if Dad finds the lovely micro-brew beer site!), maybe $100 or more for souvenirs (small souvenir photos are $15 each), and $30 for parking.  That is over $1000 to Disney for two days of visit.  Ouch.

Talking about travel and money (and the two seem to be inseparably interwoven) I must draw your attention to a great new book which I read on the flights to and from Los Angeles – On the Other Guy's Dime.  Look for the write-up on it to follow a bit further down this email collation, and do click on over to the review and think about the fascinating concept the author writes about – how to travel the world and be paid for doing so.

And still on that topic, there's some wonderfully exciting news also following.  I've now reviewed the latest in the Plane Quiet and Solitude families of noise cancelling headsets – the new top of the line Solitude X.  And I'm very impressed indeed.

When Bose came out with the QuietComfort 15 headset in 2009, they massively redefined the high end of noise cancellation capabilities, leaving all their competitors – including Plane Quiet and Solitude – way behind.  But now this new Solitude X headset has managed to pretty much catch up to the QC15 (I actually think the Solitude X has better quality audio).

It is not an idle boast to say that it has been the support of Travel Insider readers that went a long way to helping Outside the Box – the parent company of Plane Quiet and Solitude – become viable and a recognized major market player, and we've been doing that ever since their first model came out way back in 2003.  They in turn have been very generous supporters in our annual fundraisers.

I felt I've been building up a fairly large raincheck of goodwill from Outside the Box, and decided now was the time to cash it in.  These new headphones aren't just good, they aren't just better, they are amazingly better than previous models, and you really truly can hear the better noise cancelling and the lesser electronic hiss.  So I told David Dillinger of OtB that I wanted a special offer for readers; an offer that wouldn't just make it easy for first time headphone buyers to get a set, but an offer that would help past customers to feel good about upgrading to this new and vastly improved model.

With some arm twisting, he came to the party, with an amazing deal that you'll probably find impossible to refuse.  My thanks to him for his munificent generosity to us all.  Details below.

A technical question.  I'm probably going to be switching from having my own physical server colocated at a local ISP to instead buying more conventional web hosting from a web hosting company.  I'm considering Go Daddy for this – if anyone has experience using Go Daddy for web hosting, I'd appreciate knowing if you find them good or bad.  And if there's another company you'd recommend instead, please let me know.

My current server is four years old, has become unreliable in some perplexing areas (you don't want to know about the struggles I had on Thursday to be able to get this to you!), and rather than buy another one, it seems better simply to switch to regular 'cloud' hosting.

There's not a lot of aviation news this week, but I'll try and make up for it next week.  However, I can sadly shake my head in alarm and concern and pass on this item about two more engine problems with the new Rolls Royce engines on A380s.

Rolls Royce – once a name that implied the unquestionable ne plus ultra of excellence in engineering – seems to have totally gone off the rails with their new A380 engines.  The Qantas A380 engine explosion came within a hair's breadth of destroying the plane, and one increasingly must wonder and worry how long will it be before once of these ongoing incidents results in a 'hull loss' – a disastrous crash destroying one of these lovely new A380s and kills all the 500+ people on board?

Let's hope RR gets its act together in double quick time.

And I have to pass on a seriously scurrilous bit of naughtiness by American Airlines.  You know when you volunteer to be bumped off a flight, and accept a voucher for some hundreds of dollars in return?  Well, AA have been turning around and charging you a $30 redemption fee to subsequently use the voucher you were given.  So a $300 voucher would be worth only $270 to you.  Not only that, but the airline doesn't allow vouchers to be redeemed online, and was, oooops, not very clear at disclosing the $30 fee up front.

The DoT have fined them $90,000 for this naughtiness, half of which will be waived if they don't do it again for a while.  Shame on AA.

Here's an interesting write-up on a planned new airline that hopes to start by offering significantly better than normal service on flights between JFK and Las Vegas.  But whether it will ever come to pass is another question entirely.  If the airline does actually start operations, one has to wonder how many of its current ambitious plans to be different and better than the competition will actually survive the attacks of the bean counters who will doubtless be keen to zero out all non-essential costs and frills.

Here's a scary mention of some of the risks associated with Wi-Fi usage.  We all love our Wi-Fi, and there's no greater feeling than finding a free Wi-Fi service in an airport or hotel lobby or coffee shop or somewhere else.  But, that free Wi-Fi service is also an extremely vulnerable service, with new programs making it laughably easy for anyone to snoop on your Wi-Fi data, and to gather up your user id and password details.

With identity theft an increasingly common and popular activity, and with more and more of our information available to someone who gets some of our id's and passwords, you need to be extremely aware of the double edged sword posed by open Wi-Fi networks.  Alas.

Lastly for this part of the week's news, how about this for the ultimate collectible object?