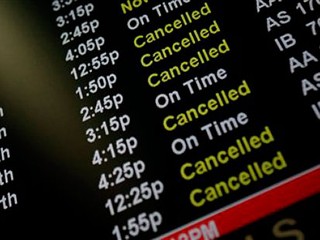 Recently, I have been asked to teach a course in San Francisco (I am in LA) flying up one day a week. I flew up Sunday, taught early Monday morning and have to be back in time for a commitment Monday night to teach another class.

Southwest canceled my flight on Monday and were very rude about it, over the top rude to me.  In fact, the girl at the Southwest counter never told me the flight was canceled, she just handed me my ticket.  When I noticed a different flight, I told her that I was on the 2:55 not 3:55 and her retort was, " Excuse me, we had to cancel. Clearly, you are not used to flying as it happens all the time!" (I have over 100,000 miles in my BA frequent flier account and have regularly flown around the country and around the world).

I noticed that the next flight that I was on was 75% full so I am guessing they just combined the flights. I haven't had this on international flights.

How do you handle this because I have a series of these flights to look forward to in the coming weeks?

Don’t you just hate rude airline employees so much!  What is it about the airline industry that empowers these people to treat us so poorly, and with impunity?

Actually, Southwest is supposed to be one of the better airlines in terms of customer treatment.  You should have got the checkin agent’s name and written a letter of complaint to Southwest.  There might have been consequences, and as long as we mutely accept such unacceptable treatment, it will continue.

You’re probably right, the cancellation may well have been load related, particularly because of the defensive reaction by the checkin agent (they're usually very quick to blame weather or the phase of the moon or any other far-fetched thing if they at all can).

But bad news in terms of seeking compensation.  Here’s the official DoT language, from their helpful website :

Contrary to popular belief, airlines are not required to compensate passengers whose flights are delayed or canceled. As discussed in the chapter on overbooking, compensation is required by law only when you are "bumped" from a flight that is oversold. Airlines almost always refuse to pay passengers for financial losses resulting from a delayed flight. If the purpose of your trip is to close a potentially lucrative business deal, give a speech or lecture, attend a family function, or connect to a cruise, you might want to allow a little extra leeway and take an earlier flight. In other words, airline delays and cancellations aren't unusual, and defensive planning is a good idea when time is your most important consideration.

In other words, next time consider flying United or Virgin America or some other airline.