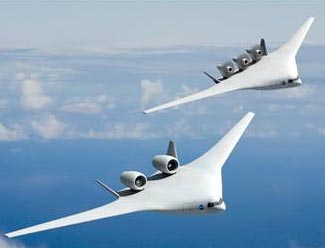 Let's start the newsletter with another reader survey.

Later in this week's compilation of articles, you'll see mention of new airplane designs being developed by Lockheed Martin, Boeing, and Northrop Grumman (pictured here are two Boeing models, with either two traditional appearing jet engines or three external rotor jet engines).  The Lockheed Martin design is interesting because it shows a plane with only one engine.  Gulp.  Yes.  Only one engine.

While engine failures – either 'uncontained and explosive' such as with the Qantas A380 in November, or less dramatic and often leaving the passengers completely unawares – are truly vary rare, until now they have also usually been fairly benign because all current planes are required to be able to still fly with one failed engine.  But – well, you can do the math yourself, I'm sure.  Suffice it to say that if the plane starts off with only one engine, a failure of that single engine would clearly have more severe and immediate consequences.

So how do you feel about flying a commercial jet plane with only one engine?  Indeed, let's assume that you're on an over the water flight on a plane that will be up to two hours away from the nearest airport during its flight.  What would you do?  Take the flight without fear or concern?  Or choose a different plane with more engines?

Please click the link to indicate your thoughts about this.  Clicking the link will open up an empty email with your answer coded into the subject line.  Simply send off the email; I'll collate and report on the answers next week.

I'd be slightly apprehensive, but would still do it

If flight schedules and prices were closely similar, I'd specifically avoid flying a single engined jet

You couldn't get me on a single engined jet, even if you gave me a personal parachute

Talking about travel, if you choose to join us on our Scotland tour in June, you'll happily be able to choose from a range of two and four engined planes to get you to Britain – and possibly even a three engined plane too (there are still a few DC-10s and MD-11s out there).  We've just had another couple choose to join us – past Travel Insider tourers (they were in Russia with me a few years ago).

So please think about adding to this group of fellow Travel Insiders and come share Scotland with us in June.  More details here.

Whether this should be considered surprising or not, we've also got at least 12 people now confirmed for the Travel Insider Defensive Handgun course in Nevada in April.  This is something you should do if you already own a handgun, and it is also something you should do if you don't have a handgun but want to know more about the issues associated with such situations.

Can anyone explain how British Airways can advertise a $270 fare from Denver to London, and then change $252 in British Airways Surcharges?    Taxes are unavoidable, but shouldn’t “FUEL” be included as a standard/included item when buying an airline ticket?

Add up the BA surcharges and government taxes, and the $270 fare ends up costing $720 (no, this is not a transposition).

Of course, the concept of offering a low lead price on an airline ticket, then deluging the customer with mandatory extra fees is one the airlines have become expert at, and one of the most expert is Ryanair.  Did you know they have become so aggressive that if you don't print your own boarding pass they would charge you €40 ($54) to print you a boarding pass at the airport?

That charge seems likely to be discontinued after a Spanish judge deemed it an airline's responsibility to provide a boarding pass, striking out Ryanair's contract language that attempted to force passengers to do it and charging the €40 fee if they didn't.

The Japanese do come up with some strange creations, and here is one of their strangest.  A 'Welcome to Japan' bra that has a row of push buttons on it.  Should you be allowed to push one of them, the bra will speak a greeting in one of several languages.

And flip up a short skirt integrated into the bra (should you be so lucky) and you will see (get your mind out of the gutter!) a map of Japan with tourist hot spots highlighted.

Talking about travel related underwear, here's a really stupid idea.  Underwear that will obscure your more personal body parts so they can't be seen on the new X-ray scanners.

But – let's think this through.  What would even one of the slowest TSA employees do when they observe that your naughty bits can't be seen?  Yes, of course, they'll send you over for secondary inspection and a good generous pat-down (what in an only slightly different sense would instead be called a feel-up) of the obscured areas to ensure you weren't hiding anything, well, naughty.

Let's close this first part of today's newsletter collection with an upbeat story about airlines and the pilots who work for them.  Read this story about a Southwest pilot who voluntarily held back his flight to allow a passenger to get to the plane.

Until next week, please enjoy safe travels (and keep an eye on the weather before flying anywhere)