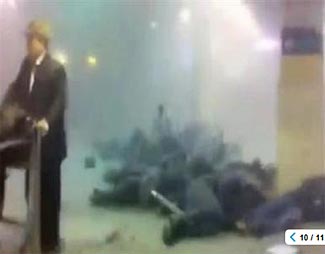 At 4.32pm Moscow time today (Monday morning – 1332 GMT, 8.32am in New York, 5.32am in Los Angeles) some type of bomb exploded in the luggage claim area of the international arrivals hall at Moscow’s Domodedovo Airport.  This picture, taken from a passenger’s cell phone, conveys the carnage and the smoke/debris filled air immediately after the explosion.

Current reports suggest at least 31 fatalities thus far, with 58 extra people hospitalized, 46 of whom are said to be in critical condition.  Another 100 or more received first aid at the airport.

It is believed the bomb was equivalent to somewhere between 5kg – 10kg (11 – 22 lbs) of TNT, and may have been detonated by a terrorist wearing a suicide belt.  The terrorist would have been in the crowded area where people wait to meet arriving passengers as they exited from the customs area’s green lane.

On the other hand, it may have been in a piece of luggage and might have been intended to have gone off in flight instead of on the ground.  We’re not yet sure.

International flights which arrived in the half hour before the bombing are :

The Russian authorities have rushed to attribute the bombing to an attack by Islamic separatist terrorists who are seeking to create a breakaway state in Russia’s north Caucasus region.  Russia seems to suffer such attacks once or twice a year.

As such, this event seems unlikely to represent the onset of some global wave of generic terrorist attacks, and may indeed be merely one of the sporadic isolated events that occur in Russia seemingly at random with no real linkage from one event to the next, so it hopefully does not presage the start of an ongoing terror campaign in Russia, either.

Predictably, security has been increased at Domodedovo, and also Sheremetyevo and other Russian airports, and I’d expect also at major train stations.  This increased security in most cases probably means little more than increased numbers of police more regularly checking IDs of ‘suspicious looking people’ – primarily people from Russia’s Caucasus region and other ethnic minority groups; not so much clearly Russian people or westerners.

Domodedovo (DME) has grown to become Moscow’s largest airport, overtaking Sheremetyevo (SVO), which formerly held that title.  But whereas DME has been rebuilt to a high western standard and provides something reasonably close to a good quality western style travel experience, SVO remains dirty, dingy, and dowdy, and offers an appalling experience; so bad that many major international airlines have switched their flights to DME instead.

The airport was closed for several hours, with inbound flights being rerouted to Sheremetyevo, but appears to now be open again for both arrivals and departures, with realtime flight status information on DME’s website.

To put this event into context, here’s a list of recent attacks in the Moscow region alone, published last year, but which omits the Moscow metro bombing on 29 March 2010, which is discussed and analyzed here.