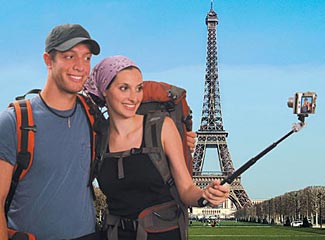 More good news for rail fans.  The German rail operator, Deutsche Bahn, is moving forward with plans to run trains all the way to London (through the Channel Tunnel), and sent a test train to London's lovely St Pancras terminal this week.

DB would initially operate trains from London to Frankfurt and Amsterdam (planned to start in 2013 – why the huge delay?), and then would add extra routes to Brussels, Cologne and Rotterdam.  All trains would go to Brussels, where different carriages would then be split to go to different end destinations, making it easy for passengers who would not need to change trains en route.

Talking about London, in case anyone cares, official ticket prices have been set for the London Olympics in 2012.  Prices range from a low of £20.12 up to a high of £2012 – with both prices applying to seats in different areas for the opening ceremony.  The best seats for the men's 100 meter final will sell for £725.

A couple of new records have been set for 'The World's Longest —'.  The World's Longest Tunnel has now had its ceremonial breakthrough between drilling machines working from opposite ends, and it is to be 57 km (35.6 miles) long, through the foot of the Swiss Alps.

The rail tunnel will actually not open for trains until 2017, and has already been under development for 15 years.  It will reduce rail travel time by an hour.

The World's Longest Overhead Cable Car Line is now open in Armenia.  It is a 5.7 km (3.6 mile) long line that goes across a gorge and to the Tatev monastery.  It has two large gondolas, each holding 25 people, and a one way journey will take 11 minutes.

At its highest point it will be 1050 ft above the ground below.  The Sandia Peak cable car in New Mexico had formerly been the longest cable car ride.

Continuing a theme of best/biggest things, here's an interesting survey that finds what our most popular gadgets are.  Needless to say, cell phones come top, followed by desktop then laptop computers, MP3 players, and game consoles.  5% of American adults already own an eBook reader, and a massive 4% have a tablet type computer (something that is barely six months into the market).

And how about this list of 'the most embarrassing travel gear'.  I've some of these items myself in my junk bin of things I've been asked to review – things which on the face of it seem to be clever and useful, but which I have to 'fail' because they are things I could never see either me or you actually being brave enough to use in public.

But one item should not be on the list.  What they call an 'XShot' and which is also a Quikpod (pictured at the start of this entry).  I reviewed this great device three years ago, and also have some sample photos to show how it improves a photo, all available  here.  The Quickpod is a great solution to the increasingly common self-portrait photo that has one's arm lunging out and towards where it is holding the camera pointed back at oneself.