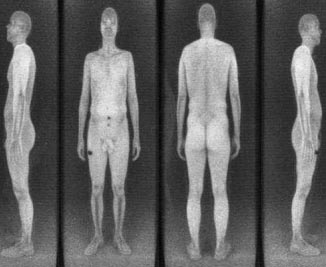 Whole body imaging scanners are becoming more and more common in US airports.  Here's an interesting article that combines some commentary on the dangers and lack of effectiveness of such devices with an account of one person's experience in opting out of being so scanned.

There are two types of whole body imaging scanners.  One type uses back-scatter X-rays (see the picture at the start of this entry), and some scientists believe the TSA has miscalculated the potential danger from exposure to this radiation.  The debate isn't whether exposure to X-rays is dangerous or not, because the indisputable answer is that all X-ray radiation is harmful and best avoided, with the effects of radiation being accumulative.  Instead, the debate is over exactly how much radiation one of these machines emits and how/where it is absorbed into the body.

Suffice it to say that there are reasonable grounds for valid doubt about the safety of these machines, and I will always opt out of being scanned by one.  If you travel more than very infrequently, you should too.

I'll probably accept being irradiated by the millimeter radio wave based scanners, depending on just how unpleasant hand searches prove to be.

If encountering a whole body imaging device, ask the security screeners 'which type of technology does this scanner use?' (without naming the technologies).  If you don't get a clear answer that includes the phrase 'backscatter X-rays' or 'millimeter radio waves' you should assume the worst and utter the formal phrase 'I opt out' and insist on your right to be hand searched instead.

Here's some more about these new devices.

Talking about opting out, here's the story of a pilot who opted out in a very big way.  It is easy to understand his perspective – there he is, about to be placed in charge of an airplane and its passengers; to say nothing of its fire axe, and possibly he is even an armed pilot with a firearm, but he is still intrusively searched every time he goes through security.  How crazy is that?