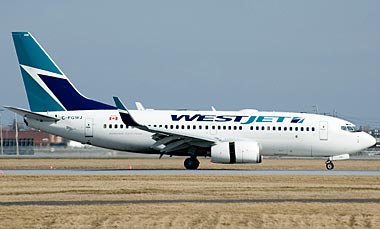 The airlines are always quick to blame
external factors for their problems.  High jet fuel prices.
Depressed economy.  Whatever.  On the face of it, this
sometimes seems fair.

But then you see two airlines come out with
two very different financial results, even though both pay the same
price for jetfuel, both operate in the same economy, etc; and you wonder
how it is possible for such a huge difference in results.  Could it
be that rather than these external factors, there are also factors
unique to each airline that influences which airlines succeed and which
fail?  Possibly even something as simple as good or bad
management?

The latest example of this is with Canada's
two main airlines.  Air Canada just posted a loss of $203 million
for its second quarter, while much smaller WestJet reported a $21
million profit.  Well done Westjet – an airline that continues to
gain more converts by virtue of providing a good service at a fair
price.  A simple formula, you'd think, but apparently too complex
for Air Canada to copy.

Talking about losses, Mexicana filed for
bankruptcy on Tuesday, blaming high labor costs and the H1N1 flu
problems in Mexico (last year, that is, not currently).

While the airline hopes to continue to
operate its flights, it is having some of its planes seized, and other
creditors and aircraft lessors are reportedly moving to grab whatever
they can, particularly when planes are outside of Mexico.

If you have travel plans on Mexicana, you
might want to keep a careful eye on its schedule.  Expect the truth
to change several times between now and whenever your flight departs.

And in generic bad news for Mexico, the FAA
said last Friday that Mexico does not meet its
international air carrier safety standards so has downgraded all
Mexican airlines.  This means that Mexican airlines cannot open new air routes to
the US.

The FAA said that Mexico has made significant improvements in safety
standards over
the last few months but it couldn't fully comply with all standards set
by the
International Civil Aviation Organization and was downgraded from a
category 1
to a category 2 country.

The FAA is believed to have issued the downgrade
largely due
to concerns over the relatively small number of aviation inspectors the
Mexican
aviation authority employs to ensure safety minimums are being met.  Until the
downgrade is lifted, Mexican airlines are prohibited from expanding
their existing
U.S. operations, and code-sharing between U.S. and Mexican airlines is
discontinued.

If you have a current ticket for travel between Mexico and the
United
States, you should verify your travel plans with your travel agent or
airline to ensure any necessary alterations are made.

This caused the cancellation of a number of
services, and the airline is threatening the pilots with civil and
criminal charges if they don't return to work within a week.

The Philippines aviation safety rating was
downgraded by the FAA in early 2008.  Like Mexico, it is a category
2 country.

And talking about labor problems, a new
alliance in the US comprising the Teamsters, Pilots and Transport
Workers unions with membership apparently primarily in the Dallas area
from employees of American and Southwest have formed a new lobbying
alliance, to be known as the 'American Aviation Labor Alliance'.

The new group says they will push issues on
aviation safety and security.  This is one of the problems with
regulating the airlines – it makes the regulators susceptible to
pressure, variously from groups with vested interests and from other
well-meaning but wrong groups (see my following article on the

ridiculous six-fold growth in hours needed for a pilot to be allowed to
fly a commercial plane).

Meanwhile, the US has now suffered a bit of
a downgrade too.  We are no longer the world's largest single
aviation market.   We're not even the world's second largest.
According to figures compiled by the OAG, we are now the third
largest.  Asia is now the largest, Europe the second, and North
America the third.

Spirit's new carry-on fee has now
started to apply.  Can I point out, in the airline's defense, that
this carry-on fee is not as draconian as some people choose to
misunderstand it as being.

If you take a medium sized bag onto the
plane – one which you can stow under the seat in front of you – you can
still do this for free.  It is only if you're taking one of those
oversized rollaboard type bags onto the plane – you know, the one that
would never fit in a sizing template and which you need to get someone
else to help you hoist up into the overhead – that you'll be stuck with
a $20+ fee.

So if you 'must' take a bag on board, either
make it a reasonable sized one and do so for free, or be prepared to pay
$20+ for the convenience.