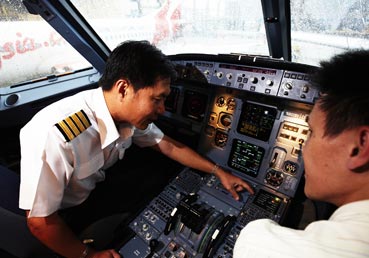 Our federal government, in its infinite (?) wisdom, has decided to increase the number of flying hours a pilot must have before being allowed to pilot a commercial plane.  Previously, the requirement was for 250 hours, that requirement has now increased to 1500.

Why?  What is the massive systemic malfunction that requires such an extraordinary increase in pilot training before they are allowed to fly a passenger plane (and almost always, initially as a co-pilot with a more experienced pilot in command)?

Let’s look at the facts, which clearly show the lunacy in this new legislation.

Air travel today is safer than it has ever been before.  US air accidents and fatalities are at historic low levels, both in absolute terms and when expressed in terms of rates per million miles flown.

While of course any accident and any fatality is regrettable, air travel is far safer than any other form of travel.  In my article series ‘How to Survive a Plane Crash‘ I give statistics on safety rates in general, and for now, a quick statistic to consider is that on average there is approximately one death per 15 million  passengers flown.  Or, to express it another way, a crash with fatalities occurs about once every million flights.  One crash per million flights?  Wow – that is an astonishingly good ratio.

And this number – one in a million – is counting all types of crash, for all reasons, some of which may be preventable, but some of which will never be prevented because they are literally and ultimately ‘accidents’ – there’s a random factor that can never be completely suppressed.  Yes, for sure, pilot error is a factor in some crashes, but so too are maintenance issues and other mishaps and unlikely events.

Now let’s look at the exact experience of the pilots in charge of the fatal crashes over the last five years.  Do we see a series of dangerously unskilled pilots?  In the case of the crash which triggered this legislation – the Colgan Air crash in upstate New York in Feb 2009, this was clearly the result of pilot error, but the pilot in command had 3263 hours of flying time – more than twice the new minimum.  How would requiring a minimum of 1500 flying hours have avoided this?

The previous accident, where a plane failed to take off on a taxiway rather than the runway (Lexington KY, Aug 2006), saw the pilot with 4710 hours of flying time – this was another case where a major factor was pilot error, but the pilot in command had three times the new minimum.  This new legislation would not have made any difference here, either.

The accident before that, where a flying boat’s wing literally fell off (Miami, December 2005), had the pilot showing 2830 hours of flying time – almost twice the minimum, and in any case, there’s not a lot that any pilot can do when your plane loses a wing.

The fourth accident was in Chicago where a Southwest jet ran off the end of the runway when landing in December 2005, and the pilot had 8500 hours of flying time – nearly six times the 1500 hour minimum.

Let’s keep going back, and look at the previous four accidents going all the way back to 2000.  4234 hours (plane landed short of runway); 2790 hours (overloaded plane crashed at takeoff); 8050 hours (vertical stabilizer and rudder fell off); and 13,043 hours (one accidental death during emergency evacuation procedure after plane safely landed).

So, looking at the official record, there’s no evidence whatsoever that plane crashes are being caused by pilots with too little flying time.  On the other hand, if this is true, we need to up the training time way beyond 1500 hours – we should make it 3000 hours (that would cover only two of these eight crashes), or maybe 6000 hours (to cover five of the eight crashes), or maybe 13,050 hours to cover all eight crashes (at less than 1000 hours of flying a year, that would be about 14 years of full time training!).

Interestingly, one of the groups lobbying for this massive increase in qualifying hours to become a pilot is none other than the pilots themselves.  Are they admitting ‘For the first 1250 hours that we were flying passenger planes, we were unsafe and insufficiently skilled’?  That seems extremely unlikely!

So why did the pilots seek this increase?  Basic economics – the law of supply and demand.  If they make it six times more expensive to become a pilot, there will be a massive reduction in people able to afford and complete the pilot training now required.  This means three things – all beneficial to present pilots, but harmful to future pilots and the airlines that wish to hire them.

The first thing is that a reduction in pilot numbers will make it easier for the pilots to dictate to the airlines and demand a return back up to their ridiculously inflated salaries they used to enjoy.  Secondly, if airline management refuses their demands and the pilots go on strike, it will not be easy for an airline to urgently train up and get replacement pilots to replace their striking pilots.  And thirdly, the pilots will be able to revise and improve their current sob story (where’s my small violin?) about how becoming a pilot costs them so much money and takes so much time that they deserve to earn ridiculous salaries once they become a pilot.

This new requirement for increasing pilot flying hours from 250 to 1500 seems to be completely unsupported by any factual analysis of recent accidents and the pilot experience in those accidents, and is further unsupported by overall air safety which is already wonderfully good and showing every sign of getting better, all by itself.  Not only is this not a solution, but there’s not a problem to start with.

This is clearly a case whereby the government is over-reaching in its regulatory role and is being played for a fool variously by pressure groups with ill-concealed vested interests, and other naieve groups that don’t understand the underlying concepts of pilot training and competence, but who simply believe ‘if 250 hours is good, then 500 hours has to be better, and 1500 hours is probably even better still’.