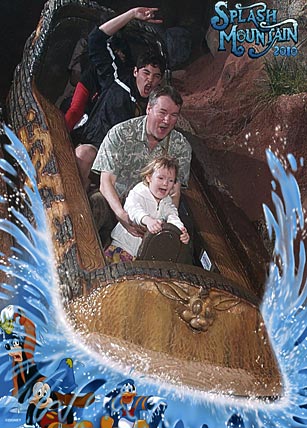 A visit to the Mouse has just become even
more expensive than before.  Walt Disney World has raised the
price of a one-day one-park ticket up to $82, and with their more
expensive multi-day tickets also increasing, generally by almost 4%.
Similar increases are occurring at Disneyland and most other theme parks
will see this as an opportunity to raise their prices too.

As I know from my experiences earlier this
year with my daughter at Disneyland (pictured left), the price of admission is merely
the start of a day of gouging.  These days the rip-off pricing of
everything from water to food to souvenirs really removes a lot of the
'family friendly' feeling that the Disney parks used to endeavour to
promote.  There's nothing friendly about paying two to three times
the cost of a bottle of water being sold right outside Disneyland, to
buy the same bottle of water inside the park.

As I reported in

February, it cost the two of us almost exactly $500 for two days at
Disneyland after totaling up admission ($292 just for admission, $28 for
parking), a little food, a couple of drinks, a photo and a minimum of
souvenirs.  If you were a typical family of four, that is $1000 –
more if you weren't as stingy as me on food and sourvenirs!

But if you'd been planning on a Disney
pilgrimage to Orlando, think carefully before tweaking your plans and
going to lovely Key West instead.  Dengue fever – a truly nasty
tropical virus – is being reported there for the second season in a
row.  This is the first time since 1946 that Dengue fever has been
reported two years in a row.

The virus spreads through the bite of an
infected mosquito.  So far the infection seems localized to Key
West, and 'only' 24 people have been reported infected this year, but
there are concerns that the virus and the mosquitos that carry it may
spread further north.

Needless to say, bring lots of insect
repellant and wear long sleeves and long trousers if visiting Key West,
and if you're one of those people who seem to attract insects even when
no-one else for miles around is being bitten, you might want to think
carefully about your travel plans.

Another place to not go would be
Greece.  Along with the strikes that are making life a misery, the
Greek 'Sect of  Revolutionaries' has issued a leaflet
threatening to bring chaos during the August holiday season in Greece.

The leaflet states that "Tourists should
know that Greece is no longer a safe haven for capitalism.  We aim
to transform it into a war zone of revolutionary processes, with arson,
sabotage, fierce demonstrations, bomb attacks, armed killings."
They have also claimed responsibility for the murder of a Greek
journalist last month.

What their leaflet does not explain is how
this will benefit Greece or encourage lenders to give the money the
country desperately needs.

Good news though if you are traveling to Indonesia
in August.  The Director General of Civil Aviation in this primarily Muslim
country has ruled that all safety-sensitive aviation personnel must eat while
on duty during Ramadan, the Islamic month of fasting that begins August 11.

Good news for Amtrak and lovers of train
travel in the US.  Amtrak has been increasingly constrained in recent years
by a crippling shortage of passenger carriages.  It has now announced plans
to purchase 130 new single level carriages for its long-distance trains, at a
cost of $298 million, with deliveries stretching over five years from October
2012 when the first new carriage is received.

This might sound like a lot of carriages, but it
isn't really.  It comprises 25 sleeping cars, 25 dining cars, 55 baggage
cars, and 25 baggage/dormitory cars, and while some of them are going to add to
the total number of carriages Amtrak has, others will be simply replacing some
of Amtrak's oldest carriages, dating as far back as to the 1940s (yes, almost 70
years old!).

Amtrak said that it has a multi-year strategy to
replace its entire fleet of carriages and locomotives.  How many years
is 'multi'?  We're not talking 5 or even 10 years.  Oh no.
How about 30 years?  One might almost wonder if, in 30 years time, some of
the 'new' in 2012 carriages might almost be in turn due for replacement.

Some new rolling stock for London's Underground,
too.  This marks the receipt of the first air-conditioned trains, to be
deployed on the Metropolitan Line, with more coming successively to the
Metropolitan Line, then to the Circle Line, Hammersmith & City Line, and the
District Line (by which time we are now talking 2013).

This is a massively overdue enhancement to
London's Tube, and needs to be added to other lines in addition to these
four lines – in particularly the Bakerloo Line.

The problem is that trains give off heat from their
engines, from their braking, from their heaters (in winter), from their lights,
and from their passengers.  This causes the tunnel walls to slowly heat up
– they are receiving more heat than they can radiate on into the surrounding
earth.  Each year, the tunnel walls get slightly hotter, and so too do the
trains.  In the winter, it is bearable to have the temperature in the tube
perhaps 20 degrees warmer than outside on the street, but add 20 degrees to a
hot summer's day and you're looking at temperatures in excess of 100 degrees.

Due to London having such an old and heavily
traveled underground network, it has problems that newer underground systems
don't have, and up until now all that has been done is in summer they sometimes
hand out free bottles of water to passengers.

Is it possible to go to Britain and not
see a castle, stately home, or church/cathedral?  Apparently
so, because apparently most people never visit any of these.  I'm
surprised.

Lastly this week, the death of RIM –
maker of Blackberry phones – seems to have taken another step forward,
with the lackluster announcement of their new version 6 operating system
and the first new phone to take advantage of it.

Blackberry phones have continued to sell
well over the last few years, but it has seemed to be as much market
inertia as any real enthusiasm that has caused them to continue to sell
in large numbers, and everyone has been very keenly waiting to see what
the new OS and phones would be like, because the older operating system
and range of phones currently available are massively outdated
compared to the latest and greatest iPhone and Android phones.

Alas, it seems that Blackberry has released
a product that is at best a catch-up 'me too' type product with no
compelling reasons for people to buy it.  Most ominously, a
recent survey suggests that 57% of people who currently have a
Blackberry are already considering switching to some other type of phone
when they next upgrade, and with the continued enhancements in Android
and iPhone capabilities, the core corporate base of Blackberry customers
is being eroded every which way.

very severe analysis that perhaps overstates the threat to RIM, but
which puts their problems in clear terms.

And, meantime, RIM has lost its place as
most popular type of smartphone in terms of US market sales.  This
has now been taken, not by the iPhone, but by the ever broadening range
of Android phones.  Details