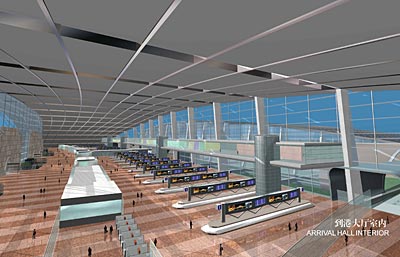 Another sign of the continuing ascendancy of China in every respect is seeing Beijing international Airport now overtake London’s Heathrow airport to become the world’s second busiest airport.  Atlanta remains the world’s busiest – but one wonders for how much longer.

Here is an interesting idea being trialed by Royal Caribbean Cruise Line.  They will allow passengers to stay longer on board the ship on the day of disembarkation right through until 90 minutes prior to its next sailing.

But there are a couple of downsides.  The first is that you still must vacate your cabin by 9am.  The second is that you will have to pay $35 each for the privilege of roaming around the board ships decks, cabinless. However, at least you will have access to lunch on board.

Talking about cruising, the Cruise Line Vessel Security and Safety Act of 2009 has now passed and gone to the president for signing.  This gives a number of extra rights to us as passengers, and requires the cruise lines to keep records of criminal complaints and to report same to the Coast Guard and FBI.  There are also requirements for minimum rail heights, peep holes in cabin doors, and video surveillance systems.

Unofficially, continuing complaints and comments suggest that quite a lot of unreported crime occurs on board ships, both at the hands of fellow passengers, and at the hands of crew members.  In the past, such events have not always met with much sympathy or support by some cruise lines; this new act is designed to cause the cruise lines to treat such matters more seriously.

The airlines report that they are surprised that only 10% of their passengers are using onboard Wi-Fi connections.  Some analysts suggest this is because the W-iFi costs too much.

I disagree; there is a much more obvious reason preventing more people from using onboard WiFi.

UPS has tried to respond to the ever higher fees the airlines charge for checked baggage.  They are offering to sell a ‘cardboard suitcase’ (don’t laugh – it’s true) that you can ship your travel needs in, to your destination and back home.

An interesting idea in theory, but destroyed by the fact that this new service offered by UPS uses their ground shipping, so if you are traveling to the other coast, you could be without your things for a week and a day each way.

There’s one other problem with this new UPS service.  Whereas the airlines usually ship your bags on the same flight as you, and get them to your destination at the same time, all for a fee in the order of $25 – $50; UPS are charging as much or more for their remarkably slower service.  All of a sudden, airline baggage fees start to seem more reasonable!

Perhaps the best that can be said of this UPS idea is that it is ahead of its time.  Noting the rate with which the airlines are pushing up their baggage fees, maybe soon UPS will be truly cheaper, but until then, it makes no sense to pay more to ship your bags more slowly.

I received a new iPhone 4 earlier this week.  I will be writing a more detailed review on it, but I wanted to quickly comment on its most distinctive feature — it’s ultra high resolution screen.  While the screen is the same size as the previous iPhones, it has four times as many pixels on it (640 x 960 pixels), and is claimed by Apple to have such a high resolution that the human eye cannot make out the pixels on the screen, it instead appearing to be a perfect display.

In comparing the new iPhone 4 side by side with the previous generation iPhone 3GS, there was almost no difference in screen display quality at all.  The display on the 3GS was perfectly clean, clear, and crisp; and did not really require or allow for much improvement with the new iPhone 4.  This was a disappointment, but in hindsight, because the iPhone 3GS display truly is very good, one should not be surprised at discovering that the improvement offered by the iPhone 4 is extremely marginal.

There may be other reasons for upgrading or buying an iPhone 4.  I’ll write more about these later, but if the feature you were most excited about was the new higher resolution screen, you should not continue to expect much visible improvement.