US Airways had about a 1.5% increase in passengers, but enjoyed a massive 23% increase in revenue – yes, airfares truly are going up – we are paying about 20% more to fly now than we were this time last year.

To celebrate its 10 year anniversary in 2010, the Skyteam airline alliance is currently offering customers a special promotion using its Round the World airfares, with reductions of between 5% and 30%.  Bookings can be made until 30 September 2010 and travel should be completed before 30 June 2011.

All 13 member airlines participate in this offer and travelers can plan their trip through the entire Skyteam network using a selection of carriers.  Depending on where the trip starts, you could get up to 30% discount on the price. The offer applies to both economy and business class fares.

Round the World fares can often give substantial savings, particularly for people wishing to travel and business or first class, and able to make their plans moderately flexibly and moderately in advance.  I have written a multipart series that tells you all about Round the World airfares.

Meanwhile, over at the OneWorld alliance, the antitrust approval for the BA/AA/Iberia tie up continues to move inexorably forward.  The EU now expects to make a decision sometime late this month, the US DOT has already given tentative approval.

And talking about airline alliances, now that the airlines are basically falling into three broad alliances (the other one being Star) which is the ‘best’?

Each has its strengths and weaknesses, both in the routes served, and the various benefits associated with aligning your travel with that particular alliance.  Here is a helpful article that sets out some of the issues and differences between the alliances.

Usually when airline passenger traffic increases, so too do delays and problems.  But because the increase in passenger traffic currently being enjoyed by the airlines is being represented by fewer planes flying more full, we are spared the worst of delays that otherwise might occur.

This is made clear in US DOT statistics that show the first five months of 2010 were the third best five month period during the 16 years they have been tracking these numbers.  The only two years with better results were the very bad (for the airlines) years of 2002 and 2003.  Overall, the airlines averaged 79.8% for on-time arrivals during these five months; the best two major carriers being Hawaiian (91%) and Alaska (88%), the worst two being Jetblue (77%) and American (78%).

Here is an interesting chart that breaks down the reasons for delays. 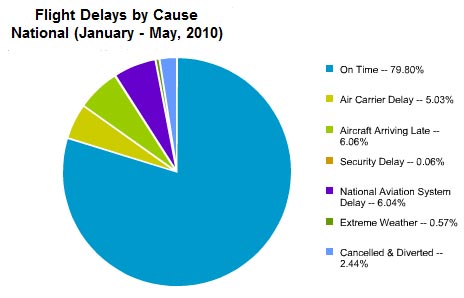