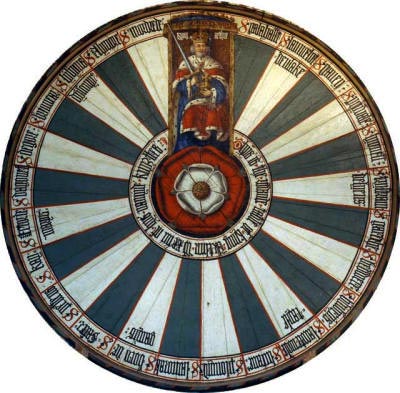 Historians and archeologists believe they
may have found Camelot and the site of King Arthur’s Round Table.

Rather than an ordinary or even large table, they speculate it may have been a monster sized structure capable of seating a thousand or more people at a time.

The facts of King Arthur are these days
inextricably woven in with the legends of his life and times, and it is hard to know where one starts and the other stops.  Few things seem completely credible.  Even Glastonbury Abbey, supposedly the burial place of Arthur and his wife Guinevere, is probably, in  reality, not that at all; and with the vast years that separate us from the truth of the Arthurian stories, little can be stated with certainty.

Tintagel in Cornwall and its ruined castle on the cliffs overlooking the water have been sometimes considered to be Arthur’s birthplace and/or Merlin’s cave, and is certainly a very evocative place that should be on your itinerary if you’re considering an Arthurian theme to your travels around Britain.

As for the ‘Vale of Avalon’ – where Excalibur came from and where Arthur was taken to recover from his battle wounds – this has been thought to be variously somewhere in Somerset and ranging all the way north to the Isle of Arran off the Scottish coast.

And now a new piece of research suggests that Chester might be the site of Camelot and the Round Table.  Historians believe that a recently uncovered Roman amphitheatre in Chester may have been repurposed to serve as the ’round table’ where Arthur would meet with and instruct his knights prior to going to battle.  Details here.