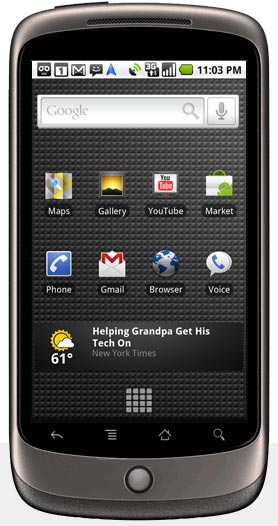 I wrote a couple of weeks ago about

the collapse of Microsoft's efforts to sell its disappointing Kin phones.

More failure this week, with Google taking
the final and inevitable step on its Nexus One phone project.  The
Nexus One was always a strange project for Google – what was a software
company doing playing with phone hardware that it hadn't even designed
itself but contracted out to major manufacturer to build for it?
And why upset all Google's partners who currently use Google's Android
phone operating system, and who prominently feature Google search, on
what became competing phones?  Plus, why only sell the phones over
the internet and not allow T-Mobile (Google's sole US partner) to show
them and sell them direct in their stores?

None of this made any sense at all, and now
Google has said that when it has sold the last of its remaining
inventory, it will cease to offer the phone for sale.  Google made
this embarrassing announcement under the headline 'Nexus
One changes in availability' – a lovely bit of corporate
doublespeak.

But, don't worry – you haven't missed out on
anything.  There are plenty of equally good or possibly even better
Android based phones made by HTC, Motorola, and others, and for sale not
only through T-Mobile (well, actually, T-Mobile has no 'top of the line'
Android phones for sale at all), Verizon, Sprint, and AT&T (plus most
other companies elsewhere in the world as well.

Suggestion – if you're looking to buy a
phone these days, ensure it has at least a 480×800 screen resolution and
at least a 3.5" diagonal screen.

In more phone news, some people would
consider the biggest and most conspicuous failure in the smart phone
market at present to be Nokia.  Others might claim it to be
Blackberry.  But in both cases, the massive historic market share
and market place inertia has helped these two companies, allowing them
to lose market share more slowly than otherwise might be the case.

Well informed sources are now claiming that
Nokia is about to replace its CEO.  The present Nokia CEO has been
in place since 2006, and so has been in charge of the company during its
steady decline over the last three or four years, a demise based in
large part on the two massive market changes – the launch of the iPhone
in mid 2007 and the release of the Android operating system 15 months
later, in 2008.  No Nokia phones have the appeal of the iPhone, and
Nokia's Symbian operating system causes barely a ripple of interest
among developers and phone buyers.  More details