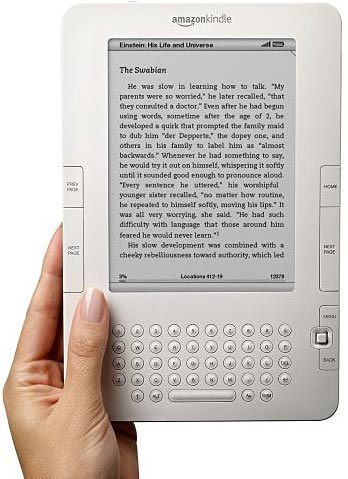 Be careful to understand exactly what this
headline does and does not say.  It sure sounds massively
impressive, doesn't it.  But note carefully – Amazon is talking
about eBook sales compared to hardcover book sales.  It is silent
about how the eBook format is doing compared to paperback sales.

I point this out not to detract from the
continued massive growth in eBook sales, but merely to point out that
hardcover book sales are probably much less than paperback book sales,
and so while eBooks may well now be outselling hardcover books at
Amazon, it is probable that in total more printed books are still being
sold.

Amazon is naturally on the defensive when it comes
to e-book issues these days.  After having enjoyed several years of its
Kindle reader being almost the only participant in the e-book arena, it is now
finding itself just one of an increasingly large number of e-book providers,
both in terms of hardware and in terms of e-book titles available.

It is surely no coincidence that Amazon has had to
drop the price of its Kindle reader several times over the last year or two, and
it can now be purchased for $189, a sum which is believed to be less than the
cost price of the reader.

And, talking about less than cost price, many of the
titles that Amazon sells for its Kindle reader are also sold at less than the
price it pays for them from the publishers.

So no one can fault Amazon for the massive
commitment it is making to both its Kindle hardware and the associated e-book
software (currently with more than 630,000 titles for sale, and another 1.8
million free out of copyright older books available for free).  But the
marketplace is very unforgiving, and now that Amazon has competition not just
from the Barnes & Noble Nook reader but, most threateningly, from Apple and its
iPad, some commentators are starting to wonder if Amazon needs to rethink its
e-book game plan.

At this stage, Amazon shows no sign of blinking. On
the other hand, apart from dropping the price of the unit, the Kindle 2 e-book
reader is starting to show its age and is well overdue for an update.
While it is true that almost all novels do not need color, because apart from
perhaps a cover illustration, they are comprised exclusively of black and white
words on paper, there can be no denying that reading a book on a , capable
multipurpose iPad is a much 'sexier' proposition for most people than is the
thought of reading a book on what is increasingly looking like an
'old-fashioned' Kindle e-book reader.

Amazon is diversifying in one respect. It has
released Kindle reader software that can run on iPhones, on iPads, on various
other smart phones, on PCs and on Macs. This is a clever move that reduces
Amazon's reliance on the Kindle reader as the only piece of hardware that can
read Amazon's e-books, which are in a special copy protected format that cannot
be read by any other type of e-book reader.

And that, surely, represents the biggest obstacle to
broader adoption of e-book readers.  The extremely reader-unfriendly copy
protection that makes it effectively impossible for us to share our books or to
buy and sell them secondhand.