Steve Jobs released Apple’s new iPhone 4 earlier today.  Is this a ‘must buy’ for you?  Will it eclipse the growing lead of Android powered devices?

Here’s a quick overview of what is new and different about the iPhone 4.  But first, two things you might be wondering most of all.  The phone goes on sale on 24 June (and you can start pre-ordering it from 15 June).  It will be priced at $199 and $299 for a 16GB and 32 GB capacity model.  It comes in both black and white (pictured below) versions.  (please read on below the image) 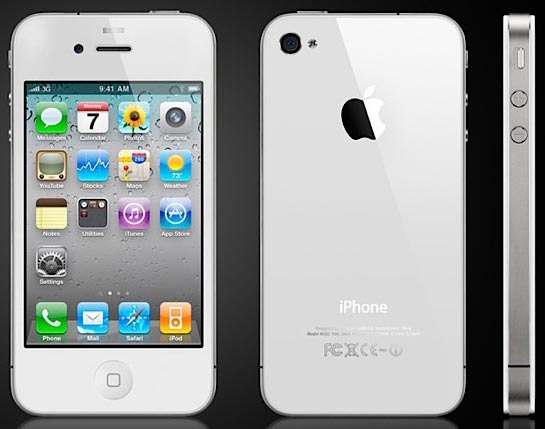 So what are the most exciting new features in this phone?

To start with, it has a longer battery life.  That is a good thing that will help many of us who currently wrestle with getting a day of heavy usage out of a single battery charge, and end up either carrying a Technocel type external spare battery or wrapping the iPhone in an excellentMophie air type external battery/protective case.

The new battery is rated for 14 hours of regular talk time, 7 hours of 3G talk time, 6 hours of 3G web browsing, 10 hours of Wi-Fi web browsing, 40 hours of music playback, or 300 hours of standby time.  This represents between a 10% and a 20% extension in battery life, depending on the use, and makes it more likely that most of us will be able to get through a busy day without running out of battery.  That is a much appreciated enhancement.

The next new thing is a much higher resolution screen.  Currently all iPhone models have a 320 x 480 pixel screen resolution.  This was impressive three years ago when the first iPhone came out, but these days the ‘standard’ high resolution screen on a cell phone is 480×800 – more than double the resolution of an iPhone.

The new iPhone 4 leaps dramatically ahead, and offers 640×960 resolution, with an incredible pixel density of 326 pixels per inch.  What does this mean?  Most regular monitors have a pixel resolution of about 75 pixels per inch, and the current iPhone has a 163 pixel per inch resolution.

Going to 326 pixels per inch makes for an incredibly smooth well defined display when showing fonts and small letters.  The best comparison is to think of a regular old television set, where you could see the scan lines, and a new HD television where you can’t.

However, many of us find the resolution on a regular iPhone to be perfectly clear and sharp.  I love every extra pixel – don’t get me wrong – but many of all these new pixels are being ‘wasted’ – no matter how many pixels you throw at a tiny letter on the screen, it still remains too small to read.  I’d have preferred to see a larger screen (4.3″ diagonal as is becoming standard on top-of-the-line Android phones) rather than 3.5″, which is the same screen size as current iPhones).  Most people will find that they can see better on a 4.3″ screen with a 480×800 resolution, than they could on a 3.5″ screen with a 640×960 resolution.

Don’t get me wrong.  The extra resolution is wonderful, and pictures will seem stunning on it, but in terms of the most impact for our typical viewing experience, a larger screen might have been more impactful than more pixels.

However, Apple clearly wants to keep its unit as tiny as possible rather than to grow the screen and the phone as a whole.  The new iPhone 4 is even slimmer than the previous iPhones (but about the same length and width), and claims to now be the slimmest smart phone in the world.  Big deal.  I carry my iPhone in a Mophie external battery pack/protector anyway – I’ve already decided I prefer more battery life to smaller size, and similarly, I’d prefer more screen to smaller size.

The new iPhone 4 has a three axis gyroscope, which will help in some types of ‘virtual reality’ gaming whereby moving the iPhone reflects movements in a ‘virtual world’ displayed on the screen.  Big deal.

It has a better camera (5MP instead of 3MP) and a teeny tiny LED type flash unit that probably has all of 5′ or so range.  It also has a second front facing camera to allow you to teleconference/video chat with the phone (this is a low resolution VGA camera).  Happily the new 5MP camera chip has a larger sensor than the 3MP, so you’ll truly get some extra quality from this.

The camera can also record video, including now a 720P high definition video format as well as lower resolutions.

The phone also supports the latest 802.11n Wi-Fi (as well as -b and -g) and has added two new frequency bands to its 3G data service (it can now receive five different UMTS bands – I/II/VI/VI/VIII) that will make it more generically useful around the world, but which still doesn’t make it compatible with T-Mobile in the US.

In addition to all the new hardware goodies and capabilities, look for Apple’s new iPhone operating system release soonish (date not disclosed).  The new version 4 of what is now being called iOS promises some multi-tasking capabilities as its chief new feature, along with enhancements to email (you can now have an integrated mailbox into which all your email from different accounts appears), better file layout/support (and folders), and other successively less exciting features (Apple count/claim 100 new features in total).

iOS 4 will also be available on current iPhone 3GS models, and to an incomplete extent, earlier iPhone 3G units too.

Other software related issues involve Apple’s iBook software now moving to the iPhone as well as the iPad, and a video editing program iMovie also being made available.

So – should you rush out to put your name on a list to get one on 24 June?

If you don’t already have an iPhone, you’ll still be able to buy an earlier iPhone 3GS with 8GB of storage for $100 as an alternative (AT&T are also remaindering out the current 16GB and 32GB 3GS iPhones for $149/$199 ‘while supplies last’).  But we’d generally recommend you go with the newer iPhone 4 – better battery life, better display, and better camera, which will give you a phone with a longer technological life than a 3GS.

If you don’t yet have an iPhone and are wondering what type of new phone to next get, this new model does a great job of catching up to the latest greatest Android phones in almost every respect.

If you already have an original iPhone or a 3G, you’ll not be able to access all the new wonderful software features unless you upgrade to the iPhone 4 (or 3GS, but we suspect the 3GS too may start to fall behind the curve of new product/feature releases).

If you already have an iPhone 3GS, you’ll be up for an early termination fee or a higher cost on a new iPhone 4 unless you wait for your present 2 year contract to expire – happily it appears that AT&T are allowing you to upgrade six months sooner than specified in your contract.  Should you wait patiently for the expiry of your present contract?  If you’re having major battery problems, perhaps that is a reason to get the newer phone and its longer battery life.  Otherwise, there’s nothing much else in the compelling ‘must buy one now at any cost’ category.

All in all, this is a much better phone than its predecessor, and a great move forward by Apple that allows it to reclaim its position at the forefront of smart phone design and capabilities.