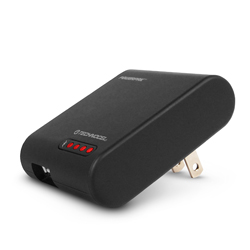 Every different rechargeable battery powered device these days comes with its own charger.  This is usually unnecessary, because 90% + of all such devices are powered by 3.7V lithium ion batteries, and have most of their ‘charging intelligence’ built into the device rather than the charger.  As a result, in theory, nearly all modern devices could potentially be charged by one universal charger that doesn’t need any element of customization within the charger to handle the charging needs of all the different devices it could connect to.

The biggest obstacle is that each device may require its own unique type of charging cable plug.  But that is slowly changing, and even for devices that do have their own unique connector at the device end of the charging cable, sometimes they will offer a cable that ends – at the charger end – not with the cable hard-wired into a brick power supply, but with an ordinary generic USB connector.  This helps make the concept of a universal charger increasingly practical.

The Technocel PowerPak gets us about as close to a universal charging device as we can realistically hope for.

It starts off being a typical brick charger, with a universal USB socket that could be connected to any device’s charging cable that terminates in a USB plug at the charger end.

Better still, for devices that do not come with a freestanding cable, the unit provides a massive collection of 10 different connectors which between them cover the vast majority of cell phones and other electronic devices.

But wait, there’s more. The PowerPak also has a built-in 1000 milliamp hour (mAh) lithium ion battery. You can carry the PowerPak with you, and if your device runs out of power at a time and place when it is not convenient to recharge it, you can simply transfer the stored charge from the PowerPak to your device.

So – the PowerPak is easy, simple, and functional.  Use the Powerpak with any of the devices that the 10 supplied connectors will fit. Use it with any other device that has its own charging cable/connector. Use it as a normal mains power brick. Use it as a portable emergency recharger.

It comes with a little drawstring pouch to hold the device and its ten connecting cables, each of which is labeled to tell you the type of devices will work with (hint – if you’re going somewhere with other people, take all ten – they take up next to no space and weigh only about an ounce for all ten together – that way you can be the hero if someone else’s device runs out of power).  The device itself is compact and not too heavy – 3 oz by itself, 5 oz with extension cable, three different connectors, and its traveling pouch. It has four LEDs on it so you can get a quick visual indication of its state of charge.

1000 mAh of spare power is about two thirds of a full charge for most modern smart phones, which should be more than enough to top up a dead phone or iPod or whatever and get you through the rest of your day before being able to recharge the device normally.

I tested it with a range of devices, all of which it readily charged.  When it came to using it with an iPad, the 1 Amp maximum output was powerful enough for the iPad to recognize the charger, and to counter its rate of discharge, but not enough to charge the iPad while it was also switched on.  The Technocel PowerPak’s battery has enough capacity to give you a bit less than an extra hour of life for your iPad – not a great deal, but better than nothing.

The product lists for $50 and is available direct from the manufacturer or from Amazon for a mere $28.  It is not bad value for $50 (due to its flexibility, multiple uses, and ten connectors) and at $28, is definitely a bargain.

Technocel also offer other combo charger/battery units with fewer adapters but with greater battery storage capacity.  However, most of the time, for most people, 1000 mAh should be plenty of reserve power for ’emergencies’.

See also this link to a review published yesterday about an ‘Ecocharger’ to give you something further to compare this unit with.