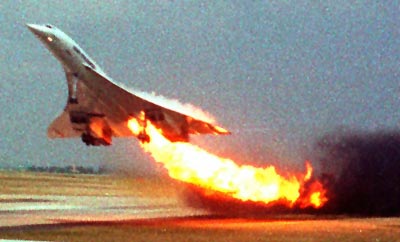 You may recall the spectacular crash of an Air France Concorde at Charles de Gaulle airport in Paris back in 2000. This tragic event can also be considered as the catalyst that caused the entire Concorde
fleet to be withdrawn from service in October 2003.

The crash was 10 years ago, but the legal arguments are still proceeding. The French are very keen to find someone to blame for the crash, but apparently Air France is off limits, even though some commentators have questioned the role of the plane’s pilots in attempting to recover from the emergency when it happened, and others have wondered if there was a problem with a repair done to the plane’s landing gear several flights prior.

It seems that a Continental Airlines DC 10 that took off shortly before the Concorde flight had a small piece of metal falloff during its take off run. The Concorde ran over the metal strip, which punctured a tire, which in turn caused debris to fly up into an under wing fuel tank, which caught fire, and the rest was history.

The plane was also apparently overloaded, making it more likely that the overstressed tires would fail at the slightest provocation.  Some analysts believe that video footage shows the plane bursting into flames prior to the point on the runway where it is thought to have struck the piece of metal from the Continental DC 10.  And the airport canceled a planned sweep of the runway to clear any possible debris off it prior to Concorde taking off.

See the discussion in this article for more details.

So, who can the French authorities now blame? And who can they parade in front of a French court to answer charges of manslaughter?

The French claim that Continental Airlines must be guilty of something, because it was a piece of one of their planes that is believed to have been the root cause of the crash.  But, not content with charging Continental, they are also seeking a two-year (mercifully suspended) jail sentence to be imposed upon the man who headed up the Concorde’s initial testing program, way way back in 1969.

Both Continental and the 80-year-old gentleman deny culpability.

Instead, they pick on an 80-year-old man and a foreign airline.

Why are the French doing this?  Who will benefit?  Why not simply learn the lessons from an unfortunate and tragic event and the chain of unintentional actions that led to it.

1 thought on “It must be someone else’s fault!”