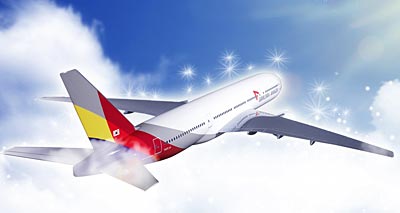 In an annual lovefest that encourages the notion that airlines are wonderful entities, offering their passengers enjoyable travel experiences, Skytrax have now announced the results of their 2010 World Airline Awards, with South Korean based Asiana Airlines (pictured here) scoring first place.

Strangely, there are no mentions of bad airlines, or listings of the world’s worst airlines.  About the closest we come to that is the section for ‘Most Improved Airline’ – going this year to Garuda.

The awards are so segmented that in some categories, almost every airline is a winner – for example, the Best Australia/Pacific Airline gives awardsfor to all three international carriers from NZ and Australia – Air New Zealand, Qantas and V Australia.  Three awards are also given in the ‘Best Airline Alliance’ category, which means that the third best (Skyteam) is also the worst, being as how there are only three airline alliances of note.

In total, 35 airlines won some sort of ‘best’ award, and plenty more were runners up.  The top ten airlines were judged to be :

Awards were based on surveys received from more than 17.9 million air travelers, who took part in the 10 month survey, between July 2009 and April 2010.  Skytrax have been issuing these awards since 1999.

More details of the awards here.