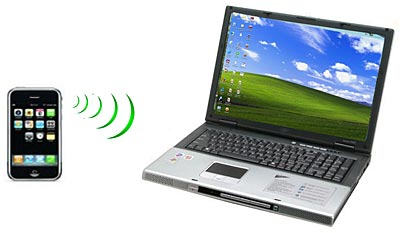 People privileged enough to be testing the latest Beta release of the iPhone 4.0 firmware have uncovered a new feature which hopefully will end up being released in the production version of this software.  This is the ability of the iPhone to be tethered.

Although tethering has been theoretically possible with the iPhone for some time, in the US it has not been available due to AT&T’s unwillingness to accept what they have feared would probably be a massive hit on their already strained data infrastructure if allowing iPhones to be tethered to other computing devices.

AT&T have been promising to allow tethering for more than a year, and it seems their promise may be about to become a reality in the new 4.0 iPhone firmware.  However, there is likely to be a downside – if you sign up for the tethering service, it seems almost inevitable that AT&T will charge you extra for the service and the likely increase in your data usage that will follow.

Now for the iPad implications.  If it becomes possible to tether an iPad to an iPhone, maybe you’ll never need to buy the 3G data equipped iPad (costing $130 extra) or to sign up for the iPad’s own separate data service with AT&T (costing either $15 or $30 a month).

This underscores my earlier advice to delay the purchase of an iPad as long as possible.  You should wait and see what tethering capabilities come out, and what AT&T will charge for the service.  Quite possibly, you might find that simply tethering your iPhone will be all you need to do – either connecting direct to the iPad, or via a product such as Connectify.

One more happy making thought.  Just as cell phones have saved us from what used to be the grossly inflated rates charged by hotels to use their in-room phones, it is possible that the growth in fast wireless data and the ability to tether a cell phone to a laptop may now save us from the hotels’ latest attempts at ripping us off ( with the outrageous fees many hotels charge us for Internet access).  Even if there is a charge associated with tethering, it is likely to be considerably less than the sometimes $15 a day (occasionally even more) charged by many hotels.