The new whole body imaging type airport scanners are being rushed into service, everywhere in the world. But as I have reported repeatedly before, serious doubts exist as to whether they really work nearly as well as they have been promised to work.  Until now, at least one could say ‘well maybe they help, but at least they don’t hurt’ and reason that any extra security, no matter how good or how bad, will help increase the safety of flights.

But perhaps these devices do indeed hurt.  A new study has challenged the way the government has assessed the danger of the radiation exposure from these machines.  Is it possible that the government may have understated the effective amount of radiation we get by a factor of 100 or more?  Full details here.

Here is a terribly sad story of a government that has lost all sense of relativity.  At the same time that the federal government expresses outrage that a state might feel it necessary to step in where the federal government refuses to, and attempt to try and do something to control the hundreds of thousands of people streaming across our southern unprotected border, the same federal government focuses closely on securing that much safer (politically as well as realistically) risk – our northern border, seeking to protect us from  the danger presented by hordes of Canadians who might wish to travel down to the US for a weekend shopping with their strong Canadian dollars before returning home in an orderly manner again.

This article tells the story of a border crossing that rarely has as many as three cars an hour pass through it, but which our government has decided needs to be strengthened and expanded.  An $8 million project has accordingly been put in place, with $39,500 of this sum to be spent on buying 4.9 acres of additional land for the border crossing facility.

Do you know how large 4.9 acres is?  For a border crossing that struggles to enjoy three cars passing every hour, what possible use can the government have for 4.9 acres of extra land (this being over and above however much land they already have)?  And how is it possible to spend $8 million on strengthening and securing this crossing?  What do they need?  A very small building, a toll booth or two, and a bit of fencing.  Most of the rest of the equipment they need is presumably already there in the present facility.

I’m not even going to ask why we are spending all this money at a quiet peaceful and largely unused border crossing with Canada when our southern border remains so exposed and exploited.  Perhaps part of the reason is that Canadians don’t organize protest marches in our cities and don’t send their Prime Minister to criticize us when we attempt to enforce our nation’s sovereignty.

About one week ago, CSX’s VP for public safety, Howard R. Elliott, told members of the U.S. Senate Commerce, Science and Transportation Committee that, based upon information his railroad has received from federal intelligence sources the ‘greatest terrorist threat to CSXT comes from the approximately 8 million passenger and commuter train miles each year that operate on CSXT-owned rail lines.’

That is a sweeping and damning statement.  But it is also almost certainly nonsense.  Passenger trains are more risky than freight trains?  Absolutely not!  Freight trains can be 10 times the size of passenger trains, and maybe even larger.  Whereas the most dangerous thing on a passenger train might be a bottle of over proof rum, freight trains can comprise wagon load after wagon load of the wagon load of toxic chemicals, inflammable fuels, poisonous gases, and who knows what else.  Rail marshaling yards are typically unsecured (as the graffiti on the side of any rail wagon will attest to) making it easy for any would-be terrorist to access and sabotage wagon loads of dangerous cargoes, arranging for maximum havoc to occur while the freight train is going through the center downtown part of a large city.

So why the focus on passenger related vulnerabilities?  Could it possibly be that the railroads expect the federal government to help meet the cost of passenger related security, whereas they fear that would have to meet all the costs of securing air freight operations themselves?

Terrorists are known the world over for being more abiding and orderly, right?  And so, due to the great importance that terrorists attach to slavishly following all local laws, no matter how restrictive or ridiculous they may be, it makes a great deal of sense to pass a law making it illegal to take weapons into the public unsecured part of an airport.  Right?  Apparently that is what Sen. Frank Lautenberg (D- NJ) believes, because he is advocating a new law to make it illegal to carry weapons into the public parts of airports.

I am sure this new law will make us all very much safer, and will foil any terrorists who might have been otherwise considering bringing firearms onto an airport.

Talking about terrorists, apparently some terrorists are known to start their evil careers at a very young age.  Which is presumably why this six-year-old girl finds herself on the no-fly list.

Our leaders continue to seek to blame other people – ideally foreigners (but probably not Mexicans!) for our own government’s shortcomings.  Here is an interesting report about a move to require foreign airlines operating in the US to check the no-fly list within 30 minutes of it being updated.  Why only foreign airlines?  Why not domestic carriers too?  if we look at recent history, we can see that terrorists are as likely to fly on a US carrier as they are to fly on a foreign carrier. 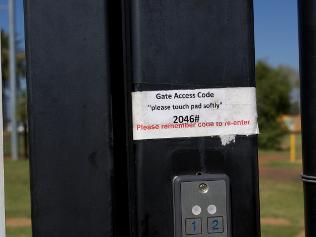 And lastly in this part of this week’s roundup, the old saying is that locks are only for honest people.  As further proof of this, Australia’s Dubbo airport’s security gate to the tarmac area had its combination number taped above the lock on a piece of paper.

They do things differently in Australia.

1 thought on “This Week’s Security Roundup”