It has been another extraordinarily great week for the US – and most of the rest of the world – in terms of reducing numbers of daily new Covid cases.  As of this evening, the seven day rolling average of new Covid cases is 15,375 per day, down from 23,175 per day a week ago.  That’s almost exactly a one third drop in numbers in a single week, and has us now with daily average new case numbers lower than they’ve been any time since the first few weeks of the crisis, last March.

That’s not to say we’re within a few weeks of zeroing out our Covid cases.  The closer to zero we get, the harder it is to keep dropping.  But the combination of ever lower new case rates and ever higher vaccination numbers surely does bring a great wave of optimism to us all; with the only major worry remaining the potential for some new virus variant to appear and circumvent the protection given to us variously by the vaccine and/or by having been infected and recovered, previously. 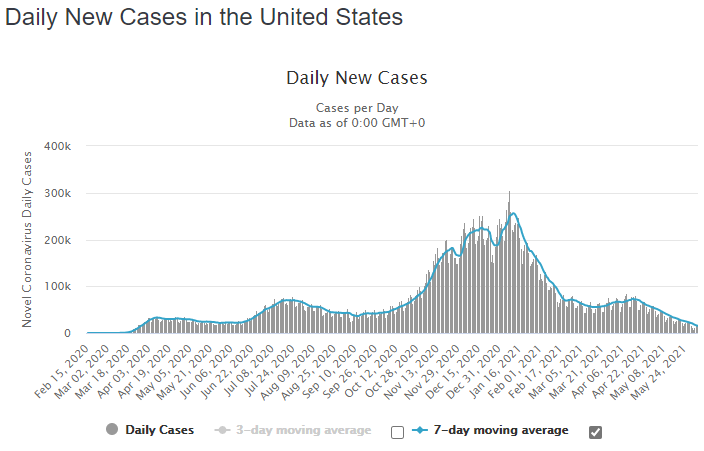 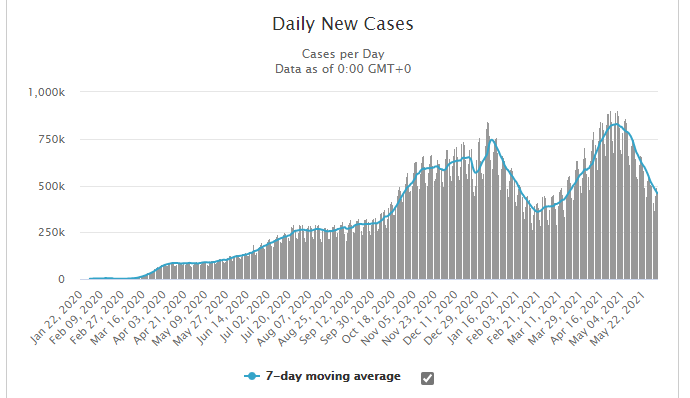 These two charts clearly show the steady reduction in daily new cases, both in the US (top) and worldwide (bottom).

But although the future seems bright for everyone, everywhere, the media is slow to adopt this rosy view of the future.  For example, this article is headed “The pandemic is getting worse, even when it seems like it’s getting better“.  It cherry picks three or four countries with growing numbers, such as “Taiwan has seen an explosion of new cases over the past month”, while conveniently ignoring both that Taiwan’s new case count is now dropping again, as steeply and suddenly as it rose, and that the “explosion” saw a maximum of 537 new cases on one day.  In a world with 450,000 or more new cases a day, that’s too small to even be called a rounding error, it is nonsensically trivial.

Not to be outdone, this article “Scientists reveal the global ‘hot spots’ where new coronaviruses are likely to emerge – with China at the top of the list” is unadulterated nonsense from start to finish, because the “experts” base their gloomy predictions on the assumption the virus magically appeared from nowhere, rather than from a lab as overwhelmingly seems certain.

A third article also finds some negativity in a sea of positivity, “For Many Workers, Change in Mask Policy Is a Nightmare“.  It is as unsupported by the real world as the other two articles, because it overlooks the fact that any worker worried about mask policies can simply go to any of dozens of nearby vaccination centers and immediately get vaccinated.

Why is the media so desperate to create doom and gloom when we should all be celebrating the great news and great progress we’ve been making at conquering this scourge?

That isn’t to say, of course, that our public health officials and political leaders have suddenly become sensible.  They’re still as disgracefully incompetent as ever.  For example, the US allowed anyone from most countries in the world to fly into the US without any testing at all until January this year.  Why they did that when most of the rest of the world had long since required passengers to be tested prior to traveling is a huge mystery, and the eventual change in policy in January might be one of the factors that saw new case numbers plunge so dramatically from mid January.

But, now, the government refuses to waive any of these testing requirements for people who have been vaccinated.  This article very appropriately asks the question “Why do vaccinated travelers still need a COVID-19 test to fly back to the US from abroad?“.  There seems no answer and no justification.  What a virtuoso display of incompetence by our officials – way too late to introduce testing, and now, way too slow to recognize the implications of vaccinated passengers.

I had to laugh – I didn’t realize WHO reads my newsletters.  On Sunday, I wondered why all the new virus variants were being given regional names relating to the regions where they were first discovered, but it still remained very politically incorrect to refer to the original virus as the China/Wuhan virus.  Within a day, WHO announced that the various virus variants would no longer have regional names to avoid stigma attaching to any regions, and they’d now be given Greek letters – alpha, beta, etc.  The media has rushed to conform to WHO’s new naming.

I wonder if WHO asked Greece how it felt about the use of Greek letters.  Isn’t that now unfairly stigmatizing Greece and the Greek language!  Shouldn’t they be giving the variants Chinese ideograms?

There were no changed in ranking for the US states.  There was only one small change (a swap of places for Maldives and Seychelles) in the minor country list.  Argentina and Portugal swapped places in the major country list, and Chile displaced Jordan off the bottom of the list.

The death rate list was surprisingly volatile.  Chile completely reworked its numbers, causing it to soar up the list and now is almost twice the number of second place Czech Rep.  Other less dramatic changes also occurred, with Spain dropping off the list entirely and being replaced by Colombia.

The last table of weekly trends was not as volatile as sometimes, with just two new entrants at the bottom, Mongolia and Malaysia.  India’s case rate dropped another 32% and is now at 736 cases per million people in the last week.  There no longer seems any point in monitoring India, and the mainstream media seem to have lost interest in India as quickly as they found it.  The UK grew by 39% to 395 cases/million, and the US dropped 33% to 327.  The world as a whole saw a 15% drop in new cases.

Items below include is allowing visitors to the US to be vaccinated a good or bad thing, scientists change their mind repeatedly about the virus origins but say such extreme shifts of opinion is “the scientific process”, how to tell if your virus infection might become severe, a nasty feeling of déjà vu, strange goings on with a new ivermectin trial, another off-the-shelf drug that seems to readily reduce infections, why do vaccine makers have immunity from law suits, vaccination rate updates, is the UK entering a third wave of new cases, the continued quagmire surrounding vaccine passports and international travel, Vietnam’s unnecessary response to a brief lift in virus cases, and will a shake-up at WHO change anything.