I hope you’re enjoying the Memorial Day weekend – indeed, apart from a cold snap in the northeast (there’s that pesky global “warming” at work again, I guess) it seems very many of us are outdoors and even traveling this weekend, with air travel numbers soaring up and almost exceeding 2 million for the first time since 8 March 2020.

There’s another number too that is enormously encouraging, but provisional rather than firm.  I’m slightly worried that the usual people who count and report daily Covid cases might not be at work over the long weekend, so perhaps actual case numbers are being underreported and will be corrected by the middle of next week, but we apparently had two exciting achievements on Saturday and Sunday.

As you can maybe see on the above chart, on Saturday the daily number of new cases dropped so precipitously that the variance number (the orange line) dropped right off the scale.  It was the greatest daily drop since 25 December, and you can probably guess why the number of new cases was so low on 25 December.

The other great achievement on Sunday came in three parts.  The new cases reported for the day also showed an enormous “off the scale” drop.  Not only that, they came in below 10,000 for the first time since 22 March last year, with a wonderfully low count of 7,750, and that also caused the seven-day rolling average to drop below 20,000 new cases/day, for the first time since 31 March 2020.

These are all stunning achievements, and shows how far we’ve come since the start of our vaccination program in December last year.  So, pat yourself on the back, because, just like democracy in general, this is the result of us all doing our individual small parts.

That’s not to say the virus has “lost the war” and all that remains is to impatiently watch the numbers continue to drop back down to zero.  It gets harder and harder to keep reducing case numbers – the opposite of a quickly growing geometric rise is a progressively slower falling drop.

There’s another reason why the drop will likely slow down.  The most clear evidence of a new form of potential ongoing peril is provided to us by Britain – they’ve a similar vaccination rate to our own, but have been suffering increased case numbers over the last 3 1/2 weeks.  Why?  Because of a new more infectious strain – referred to as the Indian variant.

That of course brings up a question – as you can see in this article, for example, there are at least 14 “named” variants, and they’re all given regional names based on where they were first found or became prominent.  Why is it okay to give regional names for virus variants, but politically incorrect to refer to the base initial virus as the Chinese or Wuhan virus?

The events in Britain point more to larger numbers of as-yet unvaccinated people becoming infected with the Indian variant, but there is now a new concern for those of us who have vaccinated – will our vaccine choice withstand the continued mutations of the virus as it tries to break through our vaccine protection?

Here’s an excellent article attempting to answer that question, can people vaccinated against the virus still spread it?  The short answer is “probably not”, the slightly longer answer is “we really don’t know for sure”, and then the politically incorrect answer is “maybe unvaccinated people are at risk, but if two vaccinated people get together, there’s almost no measurable risk at all of one of them passing the virus to the other, and even if that happens, the vaccine will probably stop the transmitted infection from becoming serious”.

Here’s a very interesting article.  Are the major vaccines 95% effective?  Or 1% effective?  Actually, they are both – it depends which measurement you choose to focus on.  Normally, the FDA requires “information providers” (such as the pharmaceutical companies) to cite both numbers, but curiously, there’s been little mention of the 1% number with the vaccines we’re now being urged to take. 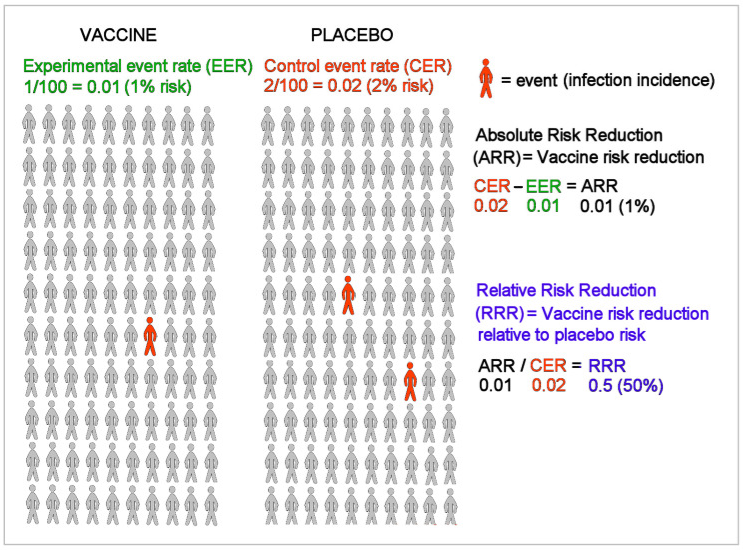 The article is a bit technical, and ultimately it is another example of the adage “there are lies, damn lies, and statistics”, but it is certainly worth thinking about (and also wondering why in this particular case, the FDA didn’t insist on sharing the 1% numbers, only the 95% numbers….).  The graphic above gives a great summary explanation – yes, a picture is sometimes worth a thousand words.

There were no changes in the US state rankings.

In the minor country list, some changes, and most notable is the extraordinary growth in cases in the Maldives – 14,000 new cases per million people in a week.

The top half of the major country list remained unchanged, the bottom half had some shifts.  The death list saw Brazil push past Belgium to second place, and Colombia join at 9th place.

The volatile list of last week’s most affected countries saw the top three places remain unchanged, and then the usual range of shifts below.  India, now essentially forgotten by the media, is at 37th place with a rate of 930 new cases per million, a 28% drop on the previous week.  The US shows 406 cases, a 26% drop from last week.  The world as a whole saw a 17% drop in new cases for the week.

Items below include an extremely shameful measure of our healthcare system’s outcomes, conflicting messages about vaccine passports, more clear proof the virus originated in the Wuhan research laboratory, a discovery of earlier Covid cases in China than previously acknowledged, an example of a humble expert who clearly explains his thinking, hopefully Dr Fauci has changed his mind and no longer is in favor of continuing risky virus experiments, a look at the vaccines now approved, and strange fees in a Californian café.