This has been a difficult week.  The great news was watching Europe as one by one, countries released sensible policies to allow Americans to go visit.  As a result, I worked with Amawaterways and put together a wonderful celebratory European cruise and a Travel Insider exclusive land extension, at great rates, for August.  I’d been planning on announcing in Friday morning’s regular newsletter.  If you know where to look, you can even find the details on the website….

But, I’ve also been watching something else – the new Covid case rates in the US.  As you know, I’ve been increasingly worrying about when the much-more transmittable Delta variant of the virus will start to impact on US case numbers, the same way it has in the UK.  This is definitely a case of when rather than if – the Delta variant is active and growing in this country, and it is just a case of waiting for it to double in numbers another time or two (it is doubling about every two weeks, according to this article) before it does the same thing to us as it has done to the UK. 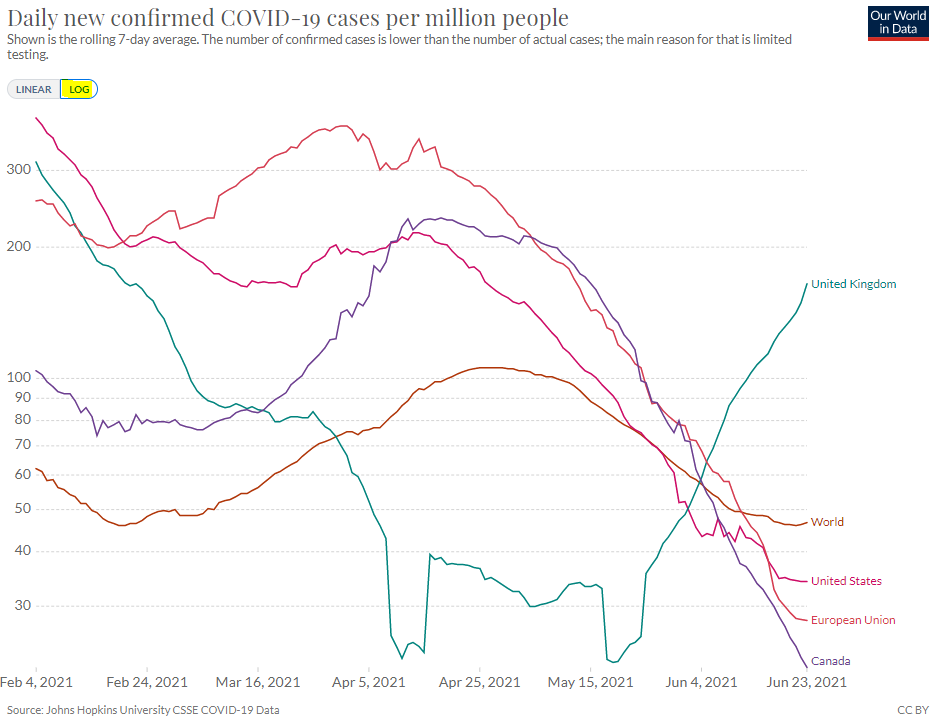 On the face of it, it seems the UK is a month or two ahead of the US in terms of what to expect.

The last week has seen an alarming trend – first the rate of new cases reduced its decrease, and then on Tuesday this week it switched from reducing to increasing, and then increased more on Wednesday, and today – Thursday – with not all states yet reporting their daily new case counts, I’m projecting another increase, and even larger than Wednesday.

The trend is clearly apparent in this chart.

Now, for sure, it is extremely difficult to project the future with this virus, but because of what we know about the driving force behind the new case numbers in the US, and what we’ve seen happen in the UK, it is likely that the trend over the last week is not a statistical anomaly, but rather a true trend and likely to extend further.

The UK is still experiencing logarithmic growth in new cases every day (the first chart, above, has a logarithmic vertical scale), so if we are to copy the UK experience, that suggests the next month or more will see increasing daily cases in the US.

It isn’t just the UK.  Australia is now struggling with the Delta variant and rising case numbers, too.  Spain is also seeing some regional hotspots and overall increasing case numbers.

There’s no way that Europe will sit back and ignore a rise in US cases as a result of the Delta variant, particularly because Europe is as vulnerable to the new Delta strain as we are, and is already responding to the UK situation by imposing quarantine requirements on UK visitors.  The only uncertainty is when the EU might tighten requirements for Americans, as well as a possibility they might start relocking down their own countries if (when) their own numbers start to rise again.

Recognizing this, I’ve decided not to offer the August tour.  I’m tempted to offer one right now instead, before our numbers become too visibly a concern, but while it is personally very tempting for me to breathe some foreign air once again, I suspect few if any of you would be able to free up time in early July to rush to Europe and make the best of what might be a short term opportunity to visit.

If I’m wrong – if numbers start going convincingly down again in the next few days – I’ll activate the August tour and send a special note out about this.  But I don’t think this likely.

Instead, I’ll focus on our Christmas Markets Cruise.  Whatever the next few months throw at us, hopefully a combination of more and more vaccinations and also growing herd immunity from past infections will see a better scenario in November and December.

So, that’s how I spent my week.  Working to create a wonderful new tour, while simultaneously trying “not to see” an alarming trend in US new case rates, only to realise, this afternoon, that I couldn’t ignore the reality.  Very frustrating.

If you’d like a vivid illustration of just how stunningly infectious this new Delta variant can be, consider this phrase – “several people were infected in just ‘fleeting’ non-physical contact” – an infected person walked past other people in a mall in Australia and they caught the infection from merely walking past.  Details here and further commentary here.

What else?  Well, China is saying it believes the Wuhan laboratory that is probably responsible for the virus that is messing all our lives at present should get a Nobel Prize!  Who knew the Chinese had a sense of humor – they’ve always seemed such a grim and grey lot, prior to now.  This article also has some interesting information I’ve not seen before about China’s role in the virus development and release.

In other Chinese news, they’ve been trying to rewrite history, by removing gene data samples from an NIH database, probably because they didn’t want to have official proof of earlier virus infections in Wuhan prior to when they are currently acknowledging its presence.

And fascinating information emerged that Google had been funding virus research in the Wuhan labs.  Why on earth would Google – a company banned from China – donate support for virus research in China?  That’s surprising/stupid on so many levels.

Would you trust a Chinese vaccine? Some countries did, and are now suffering the consequences.  It seems that, no matter what the claims are by Chinese officials, in the real world, neither of their two vaccines are very effective.  No, I’m not surprised by this.

One of the attributes of experts is they can always find a cloud to surround any silver lining.  In this case, they are worrying that because Covid cases might drop to low levels, ‘flu will be a bigger problem than Covid this winter.  But – that’s a good thing, isn’t it?  Give me the “good old ‘flu” any day over the horrid new Covid virus!

Uruguay appeared on the minor country list this week.  Colombia displaced Poland and appeared at the bottom of the major country list.  Poland dropped two places in the death list.

Items below include two more possible treatments for Covid, yet another Ivermectin trial, Malaysians seek to press criminal charges against their Minister of Health for denying the public access to IVM, more countries turn away from the AZ vaccine, US vaccination rates almost at a standstill, an article that is blinded by Trump-hate and so overlooks the reality of the story it is presenting, Canada’s strange but effective approach to virus containment, and Japan’s Emperor makes a strong public statement about the virus.