The choice of these destinations was rather puzzling.  Yes, I’m being polite.  All but one of the countries had lower Covid case rates than the UK – that is an understandable requirement, but why then was a special exception made for Portugal, with a slightly higher rate?

As for the other 11 countries, well……  Australia and New Zealand were on the list.  That would be good, except for one slight problem.  Neither country is allowing any visitors in at all.

Then there was Tristan de Cunha, with a population of only 264.  Not a destination many Brits would ever want to visit.  But, wait, also on the list was South Georgia and the Sandwich Islands, between them all boasting a total of 30 people, a place that maybe sees a dozen visitors from Britain a year (and I’ve no idea how they manage to get there).

At the same time, have a look at this list of “real” countries that were not on the list, and their lower-than-UK Covid case rates : 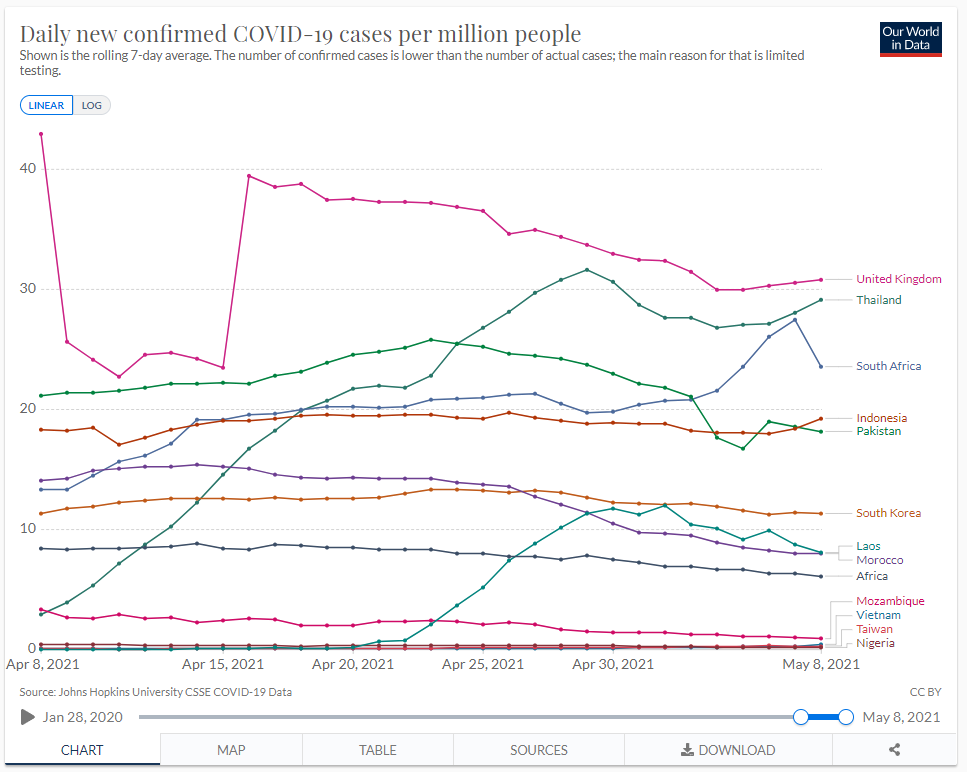 There are many other countries that have lower rates than the UK too.  Why are all these countries not on the English “green list” of countries when Portugal, with a higher rate, is on the list, two of the countries on the list don’t allow visitors, and two more are both extremely small and almost impossible to get to?

The other surprising thing is that nowhere in the new set of regulations did the word “vaccination” appear in terms of modifying the requirements for quarantine or country category.  It only appeared in the context of demonstrating proof of vaccine to other countries, not in terms of the (re)entry requirements of people into Britain.

It appears, at least at present, that Britain is totally ignoring the concept of vaccine protection in designing these regulations.  It is also not clear if the regulations, apparently written for Britons returning to England, also apply to foreign people wishing to visit England/Britain.

Leave it to the politicians to take a simple thing and make a total confusing mess, right?

Talking about total confusing messes, do you really understand the current situation with mask wearing and the reasons for it?  I surely don’t.  The CDC seems to be providing ultra-confusing “guidelines” for when masks should be worn, and it is clear there has been an – ugh – “abundance of caution” in designing the guidelines because there’s precious little value in having been vaccinated when it comes to still needing to wear a mask or not.

Here are two articles on the topic – one that struggles to understand Joe Biden’s approach to mask wearing, and the other that involves Dr Fauci dumping a pile of platitudes while trying to explain the current mask wearing concepts.

Talking about the CDC, they’ve finally, 15 months late, acknowledged that the risk of catching the virus from aerosolized virus particles is significant.  How many lives could have been saved if a single competent person at the CDC had told us, a year or more ago, about this, and suggested we should pay attention to indoor air quality?  This NY Times article is way too kind to them, while still being gently condemning of the CDC’s grievous error.

How is it that someone as unfamiliar with the topic as I, could clearly see and advocate about the risk of aerosolized virus particles way back last year, but the CDC is only now struggling to do a 180° swing in its messaging?

Here’s a searing indictment of the CDC’s slowness by one of the country’s best doctors – a gentleman who was calling for acknowledgement of the aerosol factor a year ago, and only now is slowly having his voice heard.  Oh yes, he was also one of the very first doctors to advocate for steroid use to fight Covid in its later stages (now a standard practice), and is nowadays very focused on getting ivermectin approved.

Items below include Disney and Universal Studios make it easier to be admitted to their parks, bad news for bald men, good (but not great) news for people who have already been infected, something almost as bad as reusing toilet paper, four more positive reports on IVM usage, the US vaccine monitoring program only has one in 16 people participating in it, the US enjoys the lowest count of new cases in a single day since 15 June 2020 today, vaccination numbers grow more slowly, Australia to stay closed for (at least) the rest of this year, and the impossibility when the US government mandates vaccinations but the Florida state government makes it illegal to require vaccinations, and an unfortunate choice of simile by President Putin.