Today we have two more very important commentaries that cut right to the heart of the competence, credibility, and even honesty of the medical establishment.  The first is headed “The 60-Year-Old Scientific Screwup That Helped Covid Kill” but actually, the underlying errors went all the way back to the beginning of the 20th century (although the specific error in this fascinating article is accurately dated).

It is amazing and distressing to see that even life-and-death matters and the science underpinning such vitally important issues can be so poorly researched and based on layers upon layers of unquestioned acceptance of an original mistake.

The second article is at times complex and not exactly clear in all the points it is making, but its key points and reasoning shine through.  It looks at how public health authorities have acted “strangely” (that’s a polite way of phrasing it) in their approach to ivermectin.

I’m starting to see a second answer to the obvious question (“Why have they been so unfairly biased against ivermectin?”).  It is a variation on the first answer.

The first answer was/is due to the representations of big pharma who want to develop their own expensive proprietary profitable patented medicines instead of producing unprofitable generic out-of-patent medicines.

The second answer is that a pre-requisite of getting emergency use authorization for vaccines is for big pharma to be able to credibly claim there are no other available alternative treatments or solutions to the virus problem.  If ivermectin was acknowledged as being available and effective, then – at least in theory – the EUAs for the vaccines would never have been granted.

As you surely now know, the CDC astonished everyone by announcing, with no prior hints or suggestions as to their thinking and timeline, that vaccinated people no longer need to wear masks, indoors or outdoors.  They’ve yet to answer the question – why was it too dangerous to be maskless earlier in the week, but now it is perfectly safe?  What changed overnight on Thursday?  While I’m happy with the change, I’d really like to understand the science behind it. 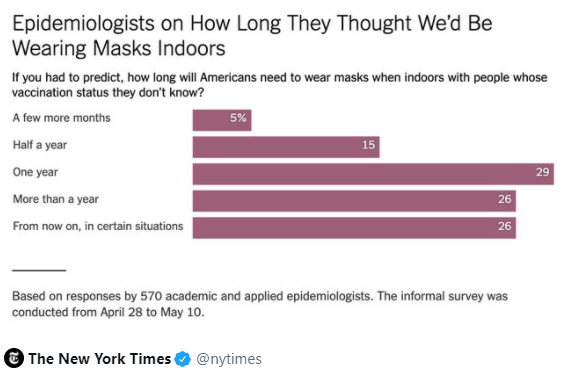 This chart gently makes an amusing point.  Not a single “expert” correctly predicted when the CDC would make this announcement, with over half predicting it would be at least a year or more before masks would no longer be needed.

Were all the “experts” wrong”?  Or is the CDC wrong?  (Or, quite possibly, were/are both the experts and the CDC wrong!).

As I mentioned on Friday, the outcome is going to be not just vaccinated people no longer wearing masks, but many unvaccinated people will stop wearing masks too and will shamelessly lie if asked if they’ve been vaccinated.  So I see the net effect being greatly increased risks to those of us not yet vaccinated, and have now “voted with my feet”, reluctantly signing up to get the J&J vaccine on this coming Friday, at precisely 11.42am at a local pharmacy.  If you’re not yet vaccinated, I suggest you should do so soon – remember, wearing a mask is not so much to protect you as it is to protect others, or to put it another way, you get less protection from your mask than from the masks of people around you, and when they stop wearing masks, your risk will rise.

Offset against that, however, is the continued extremely good news about the reducing numbers of new cases of Covid being detected in the US (and in most other countries too).  Our seven day rolling average of new cases reported is now the same as it was on 23 June last year, and the actual number of cases reported today (17,834) is the lowest single day count since 25 March, 2020.

Every day I fearfully expect the case numbers to start rising again, or at least to stop dropping, and every day now for 32 days in a row, I’ve been wrong.  Let’s hope I continue to be wrong for many more days/weeks/months.

One number that of course continues to rise, however, is the cumulative deaths in the US. Just today saw us break through the 600,000 count, closing Sunday with 600,147 deaths.  That is one out of very 600 people in the country.

Some people suggest that number is massively less than it “should” be if you’re to analyze all “excess” deaths over the last 15 months.  Other people, less convincingly (because the best reference is the “excess death” count) claim it to be greatly overstated.  But whatever the number actually is, it is still a national tragedy of a type not experienced in over 100 years of warfare and disease, and should be a reminder to us all of just how weak and inadequate we truly are against the forces of “nature” – the quotes allowing for the probability that the virus was not a naturally evolved thing, but rather was created in a laboratory doing “gain of function” testing (that was at least partially funded by the US through Dr Fauci’s NIAID), deliberately choosing to make more dangerous viruses.

Is it too much to hope that medical researchers will instead focus on researching and developing new cures first, and then new threats only after the new cures have been developed!  (Yes, I know it is hard to develop cures first, but I’m sure you see the point I’m making!).

In the US, Tennessee moved off the worst case rate list and was replaced by Utah.

The UK dropped one place to 7th in the death rate list, and was replaced in sixth position by Poland.

The weekly trends table continues to show wild swings – Costa Rica, not on the list at all last week, suddenly appeared at fifth place this week, for example.

Items below include a new very fast (25 second) test for virus infections, Covid-sniffing dogs, another favorable study supporting ivermectin, this time from Mexico, Delta Air Lines sets and shares its staff vaccination policies, the present but possibly not future need for vaccine passports, steady but slow rises in vaccination numbers, Britain’s inappropriate methodology for setting virus-based travel policies and the harm now flowing from them.