I often hesitate to open a book these days, because I feel less comfortable making the multi-hour commitment to read it than I used to, back in the days before the internet became an ever-present distraction, slicing our focus into small pieces.  But I miss the gentle activity of reading, no matter the genre.  Watching YouTube videos or streaming entertainment from Netflix, while okay, still leaves an experiential gap. 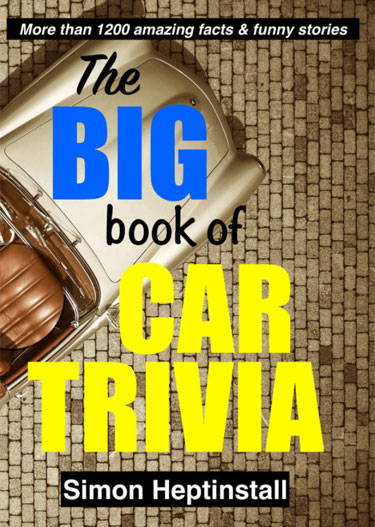 This book – “The Big Book of Car Trivia” is hardly a heavyweight book akin to War and Peace, but perhaps that is part of its attraction.  It is what I’d call “a bathroom book” – a series of short items, each independent of each other.  You can flip the paperback book open to any of its 245 pages, and immediately start reading the items (an average of about five well spaced items per page to give you an idea for the size/detail of each item), and equally immediately, stop at any point without feeling a compelling need to continue and “binge-read” all the way through in a single session.

The book is a compilation of an impressive miscellany of throw-away facts and factoids generally to do with cars and driving.  It is divided into chapters, but the chapters seem to have no obvious thematic underpinnings and are probably just a way to split the book into not-really-necessary subdivisions.

I found all sorts of trivia, some bizarre, and some possibly helpful one day – for example, if you’re stuck in the snow, you should keep the snow off the roof and body of your vehicle, so it can be spotted from the air by rescuers.  But pile snow around the sides of the vehicle – as insulation!  Yes, the snow might keep you warm.

I enjoyed being reminded of a feature in my old Rover 3500S car – they had tiny protrusions of plastic above the side light lenses (illustrated above).  When the lights were on, light flowed up the protrusion and could be faintly seen by the driver, thereby showing him that his lights were on and working, and also helping him know where the car corners were.  It won safety awards in the UK, but in some other countries (not named in the book) the tiny half inch piece of material was deemed a pedestrian hazard and so had to be discontinued.

These days, cars are required to have tire pressure sensors to tell us if their pressure is too low.  But did you know that back in 1922, drivers of the 1922 Type 59C Cadillac could fill their car’s tires at the press of a button, due to the vehicle having a built-in air compressor?

That’s a great idea, overdue for return.  For the first time in a long time, I had to buy some air from a gas station air compressor recently, and was stunned to find that something I remember as mainly being free now costs $2.50 – and cut out half-way through topping up the fourth tire!

Perhaps the most amazing item of all (well, I hesitate to say that, because many of the items are surprising/unusual/distinctive) is the item about the world’s largest roundabout.  It is in Putrajaya, Malaysia, and we are told is 2.7 miles in diameter.  To put that in more meaningful terms, it would be an 8.5 mile journey to drive completely around it.  As a youth (and even sometimes as an adult) I’d enjoy going around a roundabout multiple times – probably you did, too.  But at 8.5 miles per revolution, that quickly becomes less fun.

Except that, well, it isn’t actually that large at all.  I went and found it on Google Maps and measured it.  It is an oval, not circle, and is 0.8 miles on the longer axis and 0.5 miles in the shorter axis.  That’s about a 2.1 mile drive around, not 8.5 miles.  Hmmmm……

All the items in the book are numbered, but the numbering serves no obvious purpose other than to puzzle about why some things are counted and others are not.  Some of the numbering in the “more than 1200 amazing facts and funny stories” is a bit perplexing.  For example, a list of the four most reliable European cars (for the American market) was counted as five items.

On the other hand, a list of the ten greatest on-screen automotive iconic characters was counted as two items (Jeremy Clarkson, Steve McQueen, and Richard Hammond made the top three, the third of the Top Gear/Grand Tour trio, James May, was relegated to sixth place).  A “bucket list” of the things motorists most wanted to do was counted as 14 items (I’ve done three of the items on the list, expect to do one more, but the others – probably never).

And, on yet another hand, there are two different facts, each numbered 136.

And that “more than 1200” claim?  By the book’s idiosyncratic counting, they claim 1201 facts/stories.  Yes, more than 1200.  But only just.  In reality, probably considerably fewer, and even fewer still if each element of a combination fact wasn’t numbered separately.

The author, Simon Heptinstall, lives in Britain, and the book has a somewhat British focus in terms of what is featured.  He is a former taxi-driver and lover of most things automotive.  He also used to be a writer/researcher for the Top Gear television show, and has written several other car-related books as well.

If this type of motoring trivia is your cup of tea, you’ll enjoy the book, and you’ll have a treasure trove of trivial facts to impress and amaze your friends with and possibly to use for winning bar bets (but perhaps double check the facts first!).