I’ve been expressing the mystery of the falling new case rates here in the US, and I know some people believe it to be a reflection of our growing numbers of people vaccinated.  I disagree for several reasons, and wanted to mention one more reason today.

The plunge in new case numbers isn’t confined only to the US.  It is being echoed in most other countries around the world, and in the global total for daily new cases. 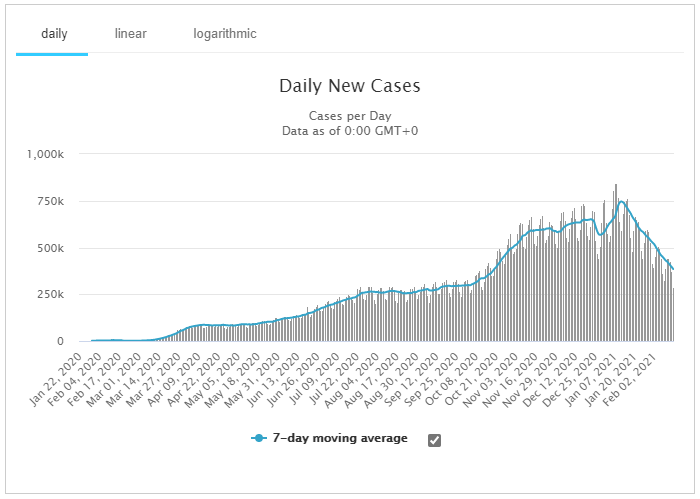 As you can see, the drop is rapid.  As for the role of vaccinations, about half of all vaccinations in the entire world have been in the US (which has only about 4.3% of the total population), but the dropping numbers are a factor pretty much everywhere else in the world, too (more on that below in our section on timings and numbers).

It also seems that the teensy tiny benefit from vaccines to date would be more than matched by the growing (doubling every 9.8 days) proportion of new virus infections that are of the more infectious type of virus.  This sudden and extended drop in new cases remains a total mystery, and demands attention and explanation.

More information has emerged about the WHO whitewash junket to China, with an Australian member of the WHO team showing himself less willing to pretend black is white and instead doing some welcome whistle-blowing.

There are several points of note, mentioned in the linked article immediately above, and/or in this other article (which might now be paywalled).

How did the WHO team determine the virus wasn’t accidentally released from either of the Wuhan labs?  This of course is one of the key issues about which there is disagreement, so you’d expect them to rigorously investigate.  They were, after all, an investigational group, and this was the topic of their investigation.

But it turns out all they did was conversationally ask the scientists “Did you accidentally release the virus” and the scientists said, in the presence of guards listening to every word they said, “No, we didn’t”.

That was the extent of their investigation!  They could have simply sent a one line email; there was no need for anyone to visit China and stage an elaborate charade if that was all they were going to do.

Imagine, if you will, the police investigating a murder.  They ask the number one suspect – the guy with the smoking gun, standing over the body, and with the victim’s blood all over him “Did you murder this person?”.  The suspect says “No, it wasn’t me”, and the police say “Okay, thank you for your cooperation, we won’t trouble you again”.  Except, of course, in the case of the virus, it wasn’t the murder of one person, it is the death, so far, of 2.4 million people, the injury of tens of millions, the economic distress/disaster for hundreds of millions more, all at a global cost of tens of trillions of dollars.

There is also the continued true mystery of earlier cases of the virus, both in China and other countries too (Italy, for example).  I’d have thought China would have seized on this as another way of introducing more uncertainty and doubt about their role in this disaster, but instead they’ve been strangely silent.

The investigating team asked if they could analyze samples from the people who had early infections, a couple of months before the first official cases were reported in December 2019.  The good news was the Chinese themselves had been doing analysis on retained blood samples just last month.  The bad news?  The Chinese neither released details of the analysis nor provided samples for the group to test directly.  Apparently we’re expected to trust but not to verify.  Again, why did this group go to China if they are simply going to passively accept Chinese statements and non-production of raw data prior to absolving China of responsibility?

Back to the murder case comparison.  That’s a bit like the police saying to their suspect “Give us a DNA sample so we can see if you were the person holding the knife that stabbed the victim” and the suspect says “No, I won’t give you a sample, but don’t worry, I did my own testing and it wasn’t me, but I won’t show you the results.”  And again the police walking away, crossing the person off their suspect list..

The team’s chief China apologist described things this way “We did get access to critical new data throughout”.  The facts (and, more to the point, the lack of facts) appear to contradict that statement.

One last point.  The Australian also said the team wasn’t set up to do any sort of forensic analysis – he said that would be a matter for “specific experts”.  So what was the purpose of the mission in the first place?  As the Australian says, “So, yes, we had to rely on their answers and their data. Of course, you never know if anything is being withheld. That applies to all our work in Wuhan.”

In other words, it was a total waste of time and money.  The organization that is supposed to be the world leader in keeping the world safe is more focused on exonerating the Chinese than in trying to find out the truth.

Do you remember, months ago, how “experts” were patiently explaining to us three things :

1.  The virus was relatively stable and slow to mutate

2.  If it did mutate, then almost always, such mutations would be to make the virus less harmful rather than more harmful

3.  People who had the virus once would be very unlikely to be reinfected

I lacked the information at the time to comment on the first point, other than noting how the common cold virus – also a coronavirus – seems to mutate regularly and exist in thousands of different forms, and have always been doubtful about the other two points.

In terms of how readily the virus can mutate, this example, of a single patient who ended up with multiple mutations occurring during his long-term infection, seems the most horrifying example.

Plus, more and more, we’re seeing examples of people being reinfected, either with the same strain of virus a second time, or now, by a different strain of the virus instead.

Where are the “experts” and their gentle words of reassurance, now?

But even the “experts” sometimes can get it right.  Sadly, this warning that the virus is probably here to stay has the ring of grim truth about it.  People (including, it must be said, a now ex-President) who suggested it would just disappear never had any type of science to support those suggestions.

But hoping Covid will become “another illness we have to live with” is certainly setting expectations very low.  How about hoping it becomes another virus we can ignore and forget about, the same as polio, measles, and many others.

I know some of you still have a propensity to believe that the public health service is staffed by lovely people who truly know and do what is best for us.  How about this item, then, about what happened when a doctor was authorized to use up remaining doses of vaccine in a vial that were about to expire.  This is as stunningly stupid as it is inappropriately vindictive.  How do these types of decision-makers get to positions of responsibility?

Sweden moved up one place in the major country list, displacing the Netherlands.  It has been interesting to watch Sweden’s steady rise over the last few months – originally when people criticized Sweden’s open approach to the virus with very few social controls, Sweden’s response was to say “Well, we might be doing poorly now, but wait until the end of the outbreak and see where we finish”.

That struck me as a fair comment to make – there have been plenty of countries that briefly soared up or down in the rankings, and it isn’t really a case of judging how countries are placed partway through as it is a case, at the end (whenever/whatever that may be) of ultimately evaluating the different approaches adopted.

But, while we may or may not be getting closer to the end, we’re certainly nowhere near the beginning, and it is becoming significant to see Sweden’s numbers continuing to worsen.  It is surely harder for Sweden to so confidently claim that it will be shown a winner at the end.  Currently, Norway is showing a total case rate per million of 12,202, almost five times lower than Sweden.

The Czech Republic has now passed beyond 10% of its population having been officially infected (and doubtless appreciably more with unrecorded cases).

In the death table, Portugal advanced past the US, pushing the US back down to sixth place.

Items below include both the NIH and NIAID continuing to show strange myopia and double standards when it comes to ivermectin, but the Gates Foundation is now investigating IVM, a couple more positive IVM results elsewhere, and the strange disavowal by the CDC of statements made by their leader only a few days before.  Plus more on reducing case numbers, and more reasons to delay any international travel this year.