We passed through another significant marker on Wednesday, when the US exceeded half a million Covid deaths.

The biggest story of the the entire outbreak is the one which no-one (other than me) seems willing to dare express – the majority of those deaths, as well as most of the 28.5 million people officially counted as having been infected by the virus – were preventable deaths and cases.

Official incompetence has caused some substantial number of hundreds of thousands of unnecessary deaths.  There is no point in even asking how many people have lost their jobs for this stunning atrocity, because the officials have closed ranks and aren’t even admitting to any shortcomings, even though there have been a number of compelling and searing indictments written about unforced errors and mistakes.

Perhaps it is because the incompetence has been so widespread that it has been hard to see any “best case” exemplar of how our agencies should have worked better.

But keep in mind the next time you read about the CDC telling us two masks are better than one, that this time last year, and more recently too, they were telling us there was no need even for a single mask.  All we had to do was wash our hands regularly, and maybe social distance in some situations.

Most of all, the next time you see the official statements saying there are no known treatments for preventing infection or to address early stage infections, and arguing against hydroxychloroquine, citing two studies that weakly showed no positive effects, keep in mind the 205 other studies, most of which have shown very strong benefits from its use. 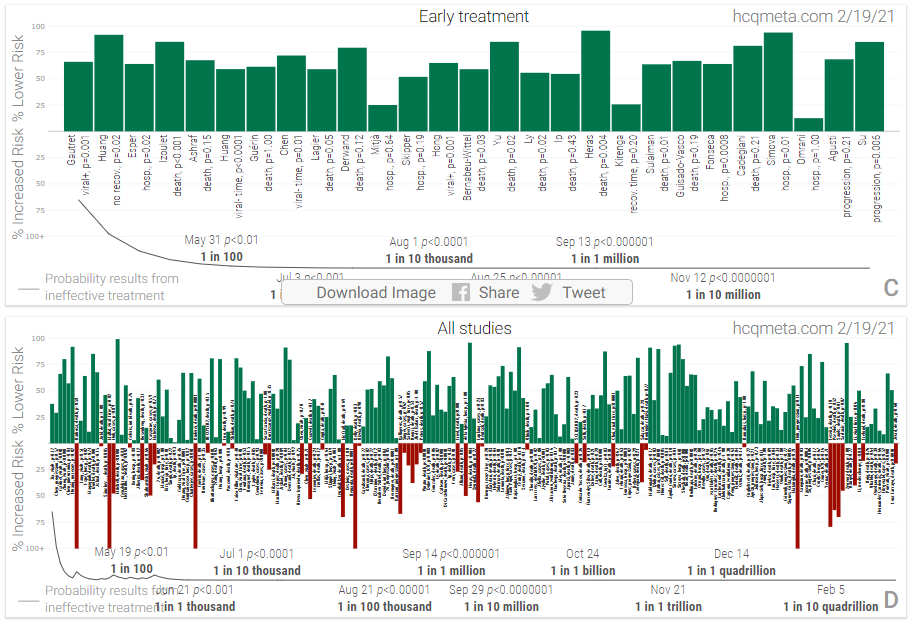 These two charts (taken from here) show, on the top, the results of all trials using HCQ as an early treatment, and on the bottom, the results of all HCQ trials, of all types, and at all stages of treatment.  HCQ has always shown benefit as an early treatment, and most of the time in all other situations too. HCQ critics selectively pick one or two of the negative trials (the red bars), but ignore all the positive trials (the green bars).

Someone who was sincere about fighting the virus and reducing mortality would try to distinguish the elements that caused the apparent failure of HCQ in some trials but the outstanding success of it in other trials, and focus on the scenarios where it could be used positively. 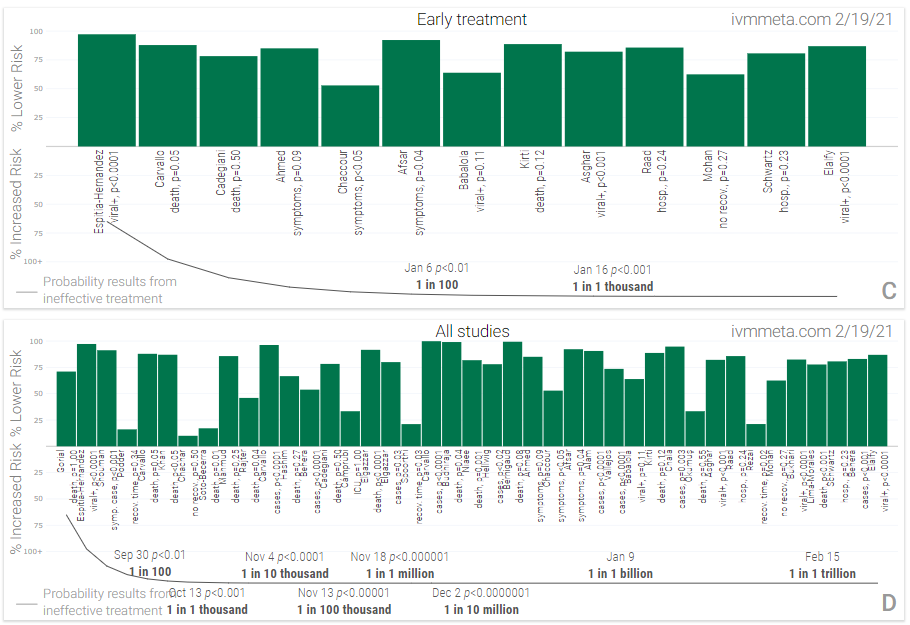 How can anyone fairly ignore these consistent and extraordinary results, which lead to an inference that early ivermectin use can reduce deaths almost ten-fold?  Keep in mind that ivermectin is widely in use all around the world, with almost no side-effects of concern at all.  It is inexpensive and readily available.  There’s no measurable downside to using it, and an enormous upside.

Other treatments are also showing great promise, but are struggling to be recognized due to the lack of interest in them.  We can understand why the big commercial drug companies have no interest in researching public-domain drugs that anyone can make and which have no major profit potential.  But what about all the government health agencies and sponsors – why are they too ignoring cheap, well-known, already-proven-to-be-safe drugs, while lavishly funding new experimental drugs that, if successful, will be in short supply and very expensive per treatment.

How many people have died because of this official myopia?  It seems possible the answer is above a quarter million people.  When will someone bring about a wrongful death class-action lawsuit against the individuals and institutions that have ignored these treatments?

Another example of how we are being killed through incompetence is in the area of testing.  Readily available testing with fast results – and followed up by contact tracing – would give us essential tools to help stop the uncontrolled spread of the virus from one person to the next to the next.  Everyone is agreed on the pivotal importance of testing.

There is now an instant at-home test kit that is very similar to a pregnancy test kit.  The manufacturer sells them in bulk to the government for $5 each.  But many of the kits the government have purchased are sitting in storage, rather than being used, for all manner of weird and ridiculous reasons.

If you want to be tested yourself, “just because”, you can’t buy one of these tests yourself.  Instead, you have to be “pre-screened” to determine your degree of risk, and then you have to pay $25 for the kit and to have an online specialist coaching you through the drop-dead simple process of doing the test, and then “interpreting the result”.

In both cases, simply recommend that a positive result should then be officially confirmed at a medical center.  That’s what is already done with pregnancy tests, so why can’t it be done with Covid tests, too?

Why is the FDA being so over-controlling to the point of stifling the available of quick and inexpensive testing for everyone?  Here’s a great article on this egregious mishandling of yet another part of our Covid response.

We mentioned before the need for a huge class-action lawsuit against all the state organs of health policy for the unnecessary deaths and suffering caused by their mistakes and missteps.  There’s an interesting case just starting to make its way through the court system at present with a woman suing her husband’s employer – he contracted the virus at work, then infected her at home.

We’re not sure how liable employers should be in this case, but we think it is an important issue to be discussed and debated, at a legal level, at a moral level, and at a social level too.

I also mentioned above about how big pharma has no interest in unprofitable drugs.  A vivid example of that is Merck – they actually manufacture ivermectin, but are ignoring it entirely while spending almost half a billion dollars to buy another pharmaceutical company to get access to a promising new anti-viral treatment it is developing.

We understand how private for-profit companies feel their first obligation is to their shareholders and their bottom line profit, so we’re not complaining too much at the actions of Merck and others.  But what about NIH, CDC, and the alphabet soup of other governmental public-health agencies?  What is their excuse?

Indeed, the NIH is so stunningly shortsighted that last year, when a company seeking a grant to develop a “broader spectrum” vaccine that would work against both known and some/many as-yet-unknown new variants of the Covid virus, the NIH refused to support the research, because independent scientists reviewing the grant application claimed there was no need for a pan-vaccine.  Those were presumably some of the scientists who claimed the virus was stable and wouldn’t mutate.

The naked incompetence and lack of vision of such people is breathtaking.

Showing the lie that underpins the claim that the virus is either stable or that mutations would trend to less harmful is this statement “A clear signature of evolutionary benefit” being used to describe virus mutations that make it more transmittable from person to person.  That would seem abundantly obvious to normal people, even if not to “experts” – the evolutionary pressure on the virus is to encourage it to become more readily passed on, so the appearance, in multiple places around the world, of new mutations that are more infectious should not be at all surprising.

How is it our “experts” are so grossly incompetent?

You’d like another example?  Here’s a statement that will come back to haunt those making it – the virus may never go away but could change into mild annoyance.

I’ll call BS on that right now.  The only things that will keep the virus at bay are vaccination or effective treatments.  People who haven’t been vaccinated, and possibly even those who have been vaccinated, but now either encountering a different virus strain, or having their vaccine benefits fading and no longer so protective, will always be at risk of severe illness or death, at least until HCQ, IVM, and other simple easy treatments are finally accepted and made readily available at all pharmacies, just the same as people buy cold remedies, antacids, pain relievers, and so on.

We also point out the article quotes researchers as expecting people getting reinfected with the virus a second time will have a milder infection.  Unfortunately, that’s an expectation not borne out in the real world, with one person in particular known to have had a mild first case, then a subsequent second case that killed them!

Worldwide new case numbers have halved in five weeks.  In the US, a similar thing is happening, but our numbers halved in less than four weeks, and now are at less than one-third of the 11 January peak new case rate, at a level comparable to on 27 October last year. 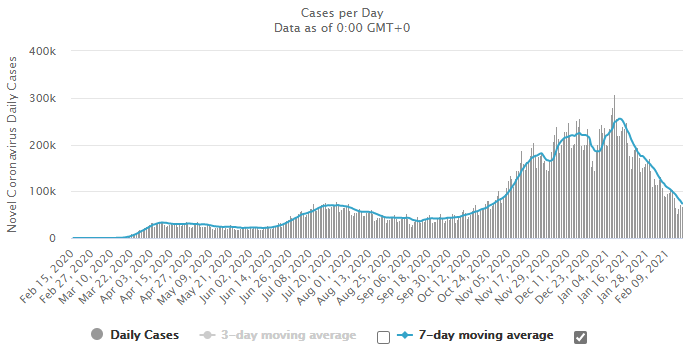 Each continued day of these dropping rates is a precious gift.  Long may it continue.

There was no change in either set of rankings in the US.

Astonishingly, there was no change in either the minor states or major states rankings.  In the death rates, Portugal moved up one, displacing the US down one.

Items below include good news about Britain allowing a challenge trial, is it good or bad that the virus is affecting more younger people, two more promising treatments, the problems with vaccination passports, bribery doesn’t always work, inconsistencies in how vaccines are tested and rated, continued strong vaccination growth, more mysterious about reducing case rates, Mr Biden makes a mistake, the government to pay $400 to vaccinate a person each time (plus the vaccine cost too), and why did Britain put the third least affected country in the world on its “too dangerous/red list” of banned countries?