Monday morning started with headlines that were almost as ecstatic as the surging share market that followed.  “Covid Miracle”.  “The end of the virus”.  “Return to Normalcy by Spring”.  Even the staid WHO managed to enthuse that the vaccine “could fundamentally change the course of the pandemic”.

As you probably know, these were references to a long awaited progress report from Pfizer about their vaccine candidate, currently going through its Phase Three trial.  Based on perhaps 62 “results” from that study so far (people who became infected with the virus either after being vaccinated or given a placebo) Pfizer says it believes the vaccine will be 90% effective.

People, who had been coming to understand that a vaccine might be as little as 50% effective, eagerly seized on the 90% number, and ignored everything else, although to be fair, there were very few other details on offer in the Pfizer release.

For example, the 90% claim is meaningless without specifying what the “confidence interval” is that applies to that number.  The usual standard is a 95% confidence interval, which would translate to the slightly inelegant statement “95% of the time, we expect the virus to be effective for between ??% and ??% of the people being vaccinated”.  But we don’t know if the 90% claim is the middle point of the 95% confidence interval, or some other point on some other continuum.  It is a meaningless piece of data – a bit like if you ask someone “how fast does that car go?” and they reply “250”.  You don’t know if it is 250 miles or kilometers or inches, and you don’t know if it is per second, per hour, or per day.

We also don’t know if that 90% rate is for everyone, or just for healthy people, who are unlikely to be threatened with severe consequences if they get infected anyway.  What is the success rate for older people, or people with pre-existing conditions that make a Covid infection more serious and more likely to become fatal – the people who most need a vaccine?

Something else we don’t know.  We don’t know if the trial, currently only halfway through its abbreviated six month period, will prove ultimately successful or not.  Other vaccine candidates have stalled at the Phase 3 trial point, and on average, 40% of all drugs fail during their Phase 3 trial.

More things we don’t know?  We don’t have a clue as to when we’d ever get to be vaccinated.  Pfizer says it expects to have enough doses for 25 million people by the end of this year.  But those 25 million doses have to be shared across the entire world (population 7.83 billion).  Pfizer also said it hoped to make enough for up to (don’t you hate that phrase) 650 million people in 2021 – so at the end of next year, less 10% of the world’s population may have been vaccinated (which makes the “return to normalcy by spring” headline one of the stupider headlines that greeted the news).

It seems that each of the two shots packs quite a wallop in terms of feeling briefly unwell, which makes us wonder what the compliance rate for taking both doses to get the complete immunity will be, and maybe fewer people will be demanding it urgently than presently seems likely.

Another thing we don’t have a clue about is how long the vaccine would last for.  A month?  A year?  A decade?  Or for as long as it takes until the virus mutates (which similarly could be very short or moderately long – and might have already happened)?

So, will this change your world or mine, in the next six months or so?  I’d rate it as very unlikely to impact materially on things and absolutely not by spring.

Maybe some other vaccine candidates will also make it to market during that time, helping to speed up the total vaccination process, and possibly with similar efficacy rates, because it seems the type of vaccine that Pfizer are developing might be better than some of the other types.  Maybe these other vaccines will help get some sort of vaccine to more people sooner.  We surely hope so.

But, for now, please continue to wash your hands and wear a mask!

Here’s a question for you.  On Sunday I listed the five US states that were the best and worst in terms of case rates and death rates.  Would those rankings be interesting to see on an ongoing basis?  I’m happy to do so if you’d like to continue seeing them.  Please let me know.

On the world stage, lots of changes in rankings today.  French Polynesia, nowhere a week ago, is now at number 5 on the minor country list.  Israel, formerly at 6, has disappeared off the list entirely.

In the major country list, France has risen from 9th to 5th, and Portugal has appeared at #12, displacing UK.

But the UK has compensated for dropping off the case list by now appearing on the death list, at #9.  The US is back in 8th place, but is catching up with Bolivia and might soon overtake it.

We wryly noted that every silver lining needs a cloud to envelop it.  With the ill-advised euphoria surrounding Pfizer’s “90% effective” announcement on Monday, travel and many other stocks skyrocketed.  But the recent stock market darling, teleconferencing company Zoom, dropped 20%.

The Utah governor has finally decided it is now time to require all Utah residents to wear masks.  No disagreements with that.  But we were surprised to see he is requiring masks to be worn for only the next two weeks.

What does he think will happen on the fifteenth day, when masks come off?  The answer is surely obvious.  The virus will come rushing back again.  We know that politicians are notoriously short-sighted at the best of times, but a two week mask order?  Really?

Here’s a great article that looks at some of the passive failures of WHO and its refusal to take the lead that is supposed to be its major reason for being, in the early stages of the virus outbreak.  The particularly interesting part of the article is the contrast it exposes between what senior WHO officials were saying privately to each other and what they were saying in public.

Here’s a study that doubtless helped a number of post-grad students move closer to Ph.D. degrees, and probably consumed much time and resource, the net result of which was to tell us something we all know, already.  Restaurants, gyms and coffee shops are very risky places where the virus spread readily.  The study goes on to helpfully point out that if you limit the number of people who can visit such places, fewer people will get infected.  Some of us have already guessed that, too.

Not quite so obvious, however, is this study.  The headline talks about the high percentage of recovered Covid patients who develop mental illness subsequently.  That is interesting and mildly surprising.  But in the body of the article is a very surprising point – people with mental illness are more likely (65% more so) to get the virus in the first place.  Understanding the reason for that would be very interesting indeed, and perhaps more revelatory than being told that eating and drinking in crowded bars is dangerous.

I never used to take multi-vitamins, but I do during the Covid era, on the basis that they probably don’t hurt, might help, and are very inexpensive.  This interesting study may slightly over-reach when it says the benefits of multi-vitamins might be all in the mind.

I’ll not question my good fortune or say “it isn’t real, it is only in my mind” if my daily multi-vitamin tablet keeps me healthy and safe.  The power of placebos is puzzling, but definitely real.

Talking about inexpensive multi-vitamins, I went to Costco to buy some more Claritin this week.  Claritin is an anti-histamine to treat allergies.  It used to only be available via a doctor’s prescription, but eventually was allowed to be sold over the counter to any and all.  I noticed, near to the Claritin display, a Costco generic product that is identical to Claritin in every respect except one.

Costco’s price for Claritin is 37 cents per tablet.  Target sells it for 50 cents each.  For a day without hayfever, it is good value. 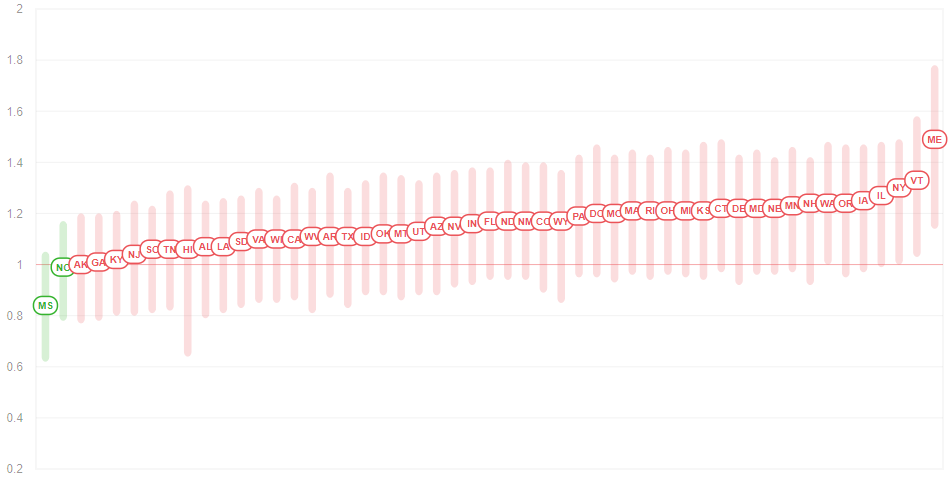 We’ve had both Mississippi and North Carolina reporting declining rates of new cases every day for almost a week now, and on Tuesday Kentucky briefly joined MS and NC.

This next chart shows what happens when so many states have growing rates of new cases every day.

The US in total has been reporting record new numbers of cases, and today it reached a new high – 161,541.  Daily new cases are now at levels twice that of the July peak.

To put that number into interesting perspective, on Thursday, we had almost exactly twice as many new cases, in a single day, as China has had during the entire year.  Keep in mind also that China has four times more people than us.

England meanwhile is tiptoeing its way through its second “lockdown”, but it is already having second thoughts, because some of the underlying assumptions and projections that justified the lockdown are already being shown to be very wrong.

The UK seems to have a history of wildly wrong assumptions.  It is possible to make excuses in the first month or so of the outbreak, when a lot of variables were having to be guessed at, and some of the guesses were unavoidably and understandably wrong.  But now, nearly nine months into the outbreak, and with a ton of real data to calibrate models with, it is dismaying that some of its preferred models remain seriously out of whack with reality.

I don’t really care if the politicians are left wing or right wing.  How can they, no matter what their political persuasion, be expected to make the right decisions when their advisors are so wrong?

Get ready to be astonished – <not>.  The first cruise to operate in the Caribbean has only 53 passengers on board.  All passengers had to test negative some days prior to boarding, and again on the day of boarding.

I’ve repeatedly pointed out how useless that testing protocol was, but apparently the SeaDream Yacht Club company doesn’t read my Covid diary.

So now, half way into their one week cruise, five of the 53 passengers already have the virus.  That’s nearly 10%.

The CDC has dropped its ban on cruising, by the way.