It is becoming more and more frowned upon to use your phone while driving.  A friend in California was recently fined $200 for doing so (even though it was a first offense with no aggravating factors or danger present).  The solution of course is either to use a headset/earpiece or a wireless Bluetooth connected external microphone/speaker.

Many cars these days come with a Bluetooth speakerphone type capability built-in.  But some of the older built-in speaker units don’t work well with modern phones – in my case, the phone and car speaker never auto-connect, and I have to manually connect the two units every time.  That doesn’t sound like an enormous hassle, but it adds another 30 – 60 seconds to every time I start the car and so I seldom bother.

There is an easier solution, both for vehicles with temperamental built-in speakerphones, and for cars with no built-in capability at all.  Add an external unit.  External Bluetooth speakerphone units are nothing new – we’ve been reviewing them since 2004 (when we bought a unit that needed to be hard-wired into the car and cost $200+ for the unit and much more for an auto-electrician to install it).  We actually still have that unit, in an (obviously) old car; unfortunately it is largely incompatible with newer phones.

New units are simple, inexpensive, and don’t require any wiring or installation.  Just clip a unit to the visor.  Yes, sometimes progress is a great thing.

A separate free-standing Bluetooth speaker switches itself on when it detects motion/vibration, such as caused by someone getting into the car, starting it up and driving, etc.  It then “listens” on Bluetooth for any nearby cell phones.  If it detects one, and it has been already “paired” with it previously, the phone and speaker then automatically connect to each other.

When a phone call comes in, you can answer the call either by pushing the answer button on your phone or on the speaker unit, and then listen and talk through the external speakerphone unit.  At the end of the call, you can press the hang-up button on either your phone or the speaker unit (often not even needed if the other person hangs up first).

If you stop the car and get out, the unit notices that it no longer has a phone connected to it.  It waits a few minutes, and if the phone doesn’t come back and reconnect, it then switches off to stand-by mode and waits until the next time it detects movement to switch on again.

So once you’ve paired your phone to the speaker unit, everything subsequently should be automatic (and if it isn’t, you should return the unit and find one which is fully automatic instead!).

The external speaker unit has a built-in rechargeable battery.  Sooner or later, the battery will need recharging.  Different speakers have different ways of signaling their low-battery status to you.  Recharging the unit is very simple.  You use a USB type charger that connects to your car accessory power (cigarette lighter) outlet, and plug the charging cable from that into the unit.  It is common but not always the case that a charger is included when you buy the speakerphone unit.  If not, you can get car chargers for as little as $8 for an appealing dual outlet unit on Amazon.

There are several things that differentiate different units from each other.

We looked through dozens of listings for units on Amazon and chose two that seemed to be among the best and best value.

Units that Connect to your Car Radio

Some units that will connect to your phone via Bluetooth, and then rebroadcast the signal on an FM frequency that you can select, so you can receive the communication through your car radio.

This might seem like a great idea, and in theory it probably is.  But, in practice, not quite so good.  It requires you to then change your car radio from whatever setting and use it otherwise would have, and tune it to a specific FM frequency before you can hear the person calling.  Sure, that’s not a big deal, but it is a distraction of sorts, and so is not as good as a unit that is always on and which you simply need to push a single button to activate. 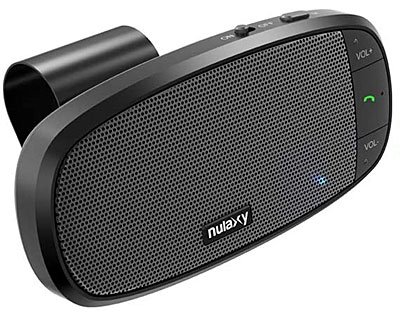 This is an attractive unit, slightly oval in shape, and measuring about 5″ x 2.5″ and being 0.75″ thick.  It has a visor clip for mounting purposes.  It can be removed if you wished to mount the unit somewhere else in the car, perhaps on the dash, using a couple of pieces of Velcro.

There are three buttons on the speaker face side of the unit – volume up and down buttons and a “control” button that can be used to answer calls, end calls (brief press), reject a call (long press), to redial the last number called (double press), to talk to Siri, or to re-enter pairing mode.

There are also two controls on the side.  A master power on/off slide switch, and another “lesser” control button that can be used to transfer calls back to the phone, or to turn the mute function on/off.  An intermittently flashing blue light indicates it is connected to a phone.

It has a micro-USB connector for the charging cable, and comes complete with a nice dual port car charger (2.1A fast charge on one outlet, 1A on the other outlet) and a short cable (0.5 meters or 20″).

An unusual feature of the unit is that it uses a standard size/shape of Li-ion battery (a BL-5C) that can easily be removed/replaced (simply slide open a battery box cover and swap the battery over).  This is probably something you’ll never ever do, but it is nice to see the manufacturer at least allows you the possibility of doing so.  Replacement batteries seem to cost about $8 on Amazon for a two pack, or $7.70 for a single battery.

Here’s an amusing thought that underscores the value in the unit.  This $11 unit includes a $7.70 battery and about an $8 car charger, and a 50c cable.  Those three items are already way more than $11, without considering the value of the unit itself.

The unit claims in its brochure to allow about 10 hours of talk time before the battery needs to be recharged, but on the Amazon listing it says 18.5 hours.  A full charge takes about two to three hours.  It has a charge light that is red while charging and green when fully charged.  A voice prompt advises when the power is low, and also advises when phones are connected or disconnected.

It can support two phones simultaneously, but doesn’t state what version of Bluetooth it uses.  We suspect it is not the latest 5.x version, because the phone doesn’t show the battery power level of the speaker unit.  We’re also not told what protocol stacks it has, and it doesn’t report battery life, ask for contacts, or play music, so presumably a fairly limited set of protocols.

Note that our auto-connect testing wasn’t for the test case “the phone is present, its Bluetooth is on, and the unit wakes up and looks for phones” but instead was for the test case “the unit is on and in pairing mode, then the phone appears” (see the two case descriptions in the “How They Work” section above).  The former scenario generally worked, but if both scenarios don’t work, that is disappointing.  Having to connect manually rather defeats the concept/convenience of the Bluetooth speaker and leaves unsolved the challenge of what to do when you’re driving down the road and receive a call on your phone.

We tested the connecting to two phones simultaneously and that worked fine.  The unit referred to them as “Phone 1” and “Phone 2” rather than by name, but that is an understandable limitation in a $11 device.

The sound quality of a person calling in to the unit was a bit scratchy and distorted, even at low volume levels.  The person calling reported that my voice sounded a bit muffled, although moving the unit around on the visor helped a little bit.

When driving, car noise was apparent, but didn’t make it impossible to talk.

Sure, the Nulaxy unit is only $11, but if it doesn’t work well, there’s no point in buying it.  On balance, we considered the sound quality acceptable, albeit a bit less than we’d hoped for.  The problem with the harder-scenario type auto connecting was disappointing, although we expect much of the time, the “normal” scenario would apply.  But Murphy’s Law being what it is, we really want to ensure that any unit we rely upon will auto-connect all the time.

On balance, the unit felt like good value for only $11.  But we did test a second unit, costing $25, to see if paying some more would get a better result.

That second review is being offered as a thank you to our supporters.  If you’re already a supporter, you should make sure you’re logged in, and when you are, you’ll see the added information with the purple introduction immediately below.  If you’re not logged in, or reading this via email, you need to log in on the website first.

If you’re not yet a supporter, can we ask you to consider joining.  Your support helps fund not just the operating costs of the site but also the direct costs of purchasing review items such as both these units.  Becoming a supporter is easy and access is granted automatically and instantly as soon as you’ve done so.  You can read the rest of this article and assorted other supplementary material as well that is explained to you after joining.  Thank you.

For as little as $11 or $25, you can get a unit that might save you a $200 fine, and might save you in general, because for sure a hands-free speakerphone unit is safer than juggling a regular phone while driving.  Modern Bluetooth speakerphone units are much more convenient than was formerly the case (and much less expensive, too!).

Whether you choose either of these units, or any of the many other units also available, they’ll quickly justify their modest cost.