Much has been made of New Zealand’s success in eliminating the coronavirus.  New Zealand is a small island nation, with no other countries for more than 1,000 miles in any direction, and a population of 5 million people.  Its largest city, Auckland, has a population of 1.5 – 1.8 million, depending on where you start and stop counting, and even Auckland is moderate rather than high density.

It has generally been suggested that because New Zealand is small and well-isolated, it was easy for the country to isolate the virus because it could isolate itself, whereas doing so is much harder, and in practical terms totally impossible for a country like the US, with a very porous southern border, high density cities, lots more travel both domestically and internationally, and so on.

But what about Hawaii?  Isn’t it an even better case for virus elimination than New Zealand?

Hawaii is smaller than New Zealand, with a population of 1.42 million people, and its largest city (Honolulu) has a population of 350,000 – 900,000, depending on where you define the city limits.  It is even more remote than New Zealand – no other countries for 2,000+ miles – and quickly established a protective two week quarantine on all visitor arrivals.

In total, Hawaii has had 851 cases and 17 deaths.  In terms of per million numbers, that is 601 cases per million and 12 deaths per million.

We’re not too worried that in total Hawaii has had twice as many cases (and three times as many deaths) per million as NZ.  What we’re focused on is the ongoing number of new cases now.  Whereas NZ has been virus free since 22 May, other than for cases in newly arrived and quarantined people, Hawaii continues to report new cases in the community.  On both Wednesday and Thursday, Hawaii had 16 new cases, and – as can be seen in the two charts below from IHME – is projected to have more cases and deaths at an increasing rate into the future. 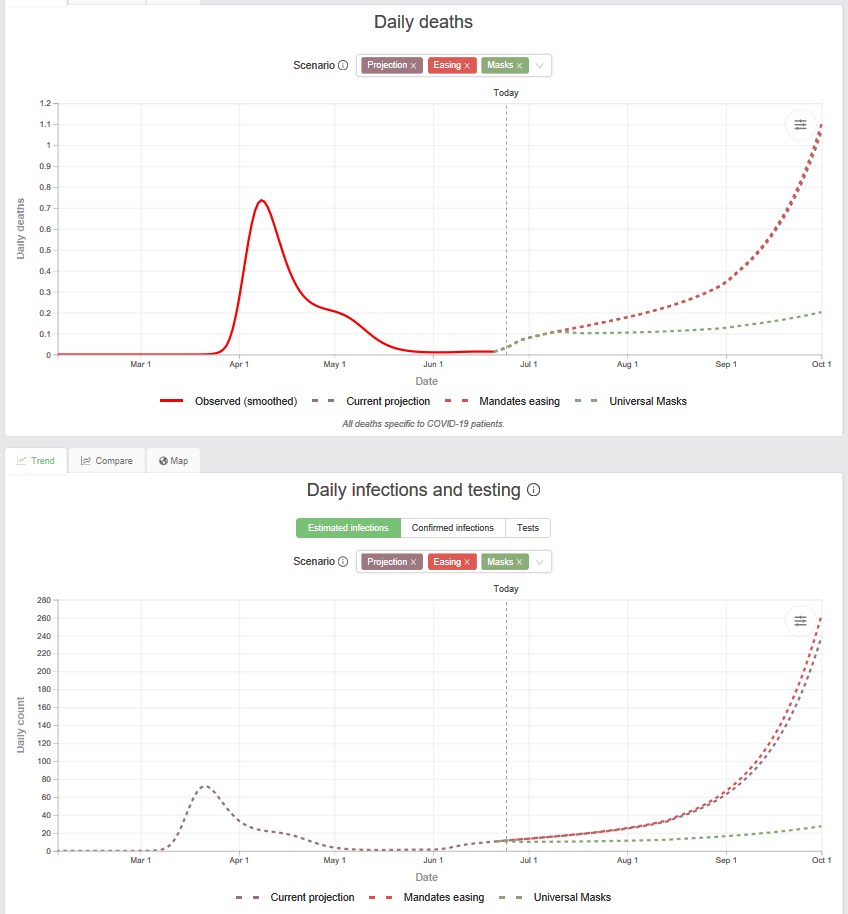 How is it that New Zealand eliminated the virus entirely, while Hawaii – after getting close to meeting the same goal – is now outlooking a rebound in cases and deaths?

The answer is in two parts.  Firstly, Hawaii never eliminated the virus before removing distancing restrictions.  It should have kept restrictions in place until it had zeroed out the virus entirely.  If it had patiently waited until that point, it could now be like New Zealand, with no cases and no restrictions.

Secondly, the projected future rise can in part be traced to Hawaii’s new decision to allow exceptions to its 14 day quarantine rule (effective 1 August – we don’t know why they’re waiting six weeks before allowing this).  If you’ve had a test for the virus within three days prior to flying to Hawaii, and the test shows you free of the virus, then you don’t need to quarantine at all after arriving.

This is a very bad compromise.  It fails to consider whatever happened in the three days since your test.  Maybe you went to a bar every night, to say nothing of five or more hours in a plane to get to Hawaii plus time in airports and elsewhere.   It also fails to consider that sometimes it takes a day or two between getting infected and having a sufficient level of virus activity for a test to detect the virus.  And, most of all, never mind that the continental US is recording new cases at a higher rate than ever before, making it a very high risk source of visitors.  Now is the time to be more defensive and restrictive of US mainland visitors, not the time to be less restrictive.

For whatever reason, Hawaii has decided to hang loose and welcome you.  The consequences will soon become apparent. 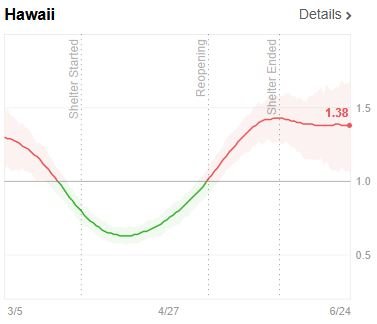 New Zealand had problems with its strict 14 day quarantine, so made it stricter to keep the country virus-free.  Hawaii is still not virus-free to start with, but has decided to loosen its quarantine requirements.

It is now showing a faster growth rate of cases than ever before (see graph of R(t) values on the left).  The current 1.38 value means each person infected is now infecting another 1.38 more people.  Then they’ll do the same.  And so on and so on.

Hawaii was the state with the best chance of beating the virus entirely.  Its failure is nothing to do with the virus and everything to do with its people and public health policy.  It represents an utter lack of will, and a rush to pretend the virus problem has been solved, while overlooking that such actions will allow the virus to spread more rapidly throughout the islands.

The situation is complicated by uncertainty about whether HI can legally impose travel restrictions on other US citizens wishing to travel to HI.  In general, within the continental US, we agree there should be freedom of movement between states, particularly because state lines are often unrelated to where people live and work and shop, and so have no meaning in terms of normal everyday behavior.

But HI is a special case.  There are 2300 miles of ocean between it and the closest part of the lower 48 states.  It deserves the best chance possible of freeing itself from the virus.

One last point.  The whole concept of the “have a test within three days of traveling that shows you are virus-free” is not only nonsensical, but often impossible.  Many people are having to wait up to a week to get test results back, even now.

1 thought on “Hawaii’s Failure to Contain the Coronavirus”