This is the 100th article I’ve written about the coronavirus (not the 100th diary entry, there have been special feature articles too).  It was never my intention or wish to write so many articles, but…..

It is a good point to pause and reflect on what we’ve learned since the start of the virus.  When I tried to come up with a list of known and certain facts, it was very short.  Instead, appallingly, while we know some very esoteric things like its sequencing details, here are the things we don’t yet know :

That is a shamefully long list (36 entries; I could add more but I think the point is made).  Although some people claim to have certain and definite answers to some of them, there is no unanimity of agreement on any of these issues.

Some of the questions are of course hard to answer, and some are perhaps not pressing right now, but it is distressing to see such a huge list of unknowns.  What have the world’s medical and public health experts been doing this year?  When will we get correct answers?

The biggest question of all, of course, is simply this

The answer to that is one we’re all increasingly wanting to know, but the solution is not to simply pretend the virus has gone away, or was never really a serious problem.  Astonishingly, even now, some people tell me the virus is no more than another type of flu, and it only affects/kills “old people”.

It is true that the mortality rates are extremely skewed towards old people, but two points in reply.

The first point is that every day, I’m more of an old geezer myself (and, dare I say it, so too are you!).  I’m not ready to be shuffled into the next life by a virus just yet.  Everyone who is currently not-old presumably aspires to become old, and so everyone should be keen to see this problem solved.  Indeed, on today – Father’s Day – the younger of us hopefully still have older people who they care for greatly.

The second point is that while younger people are much less likely to die, they seem to be equally at risk of being infected, and then pose a risk of infecting the older people who might die.  Unless there’s a way to segregate old and young, the younger people need to be protective of themselves so as not to pose a risk to the older members of our society.

Welcome to both French Guiana and Russia, making their debuts on the lists today.

Here’s another good article on dexamethasone.  The important point to note is that it should only be used in the late stages of an infection, but if an infection gets to that point, it seems to be a useful drug to deploy (and a very inexpensive one).  One could add a question to the list above, though – noting that the concept of viral related inflammation and treating it is not exactly new, why has it taken so long for the idea of deploying a steroid type anti-inflammatory to be researched?

One of my questions above was wondering why it is that some of the best articles about the virus and its problems have been written not by doctors and scientists, but by ordinary people like you and me.  Here’s an excellent example, that mercilessly skewers the bias and unscientific treatment of a “scholarly” UK anti-HCQ study.  The author (a doctor – but a physicist Ph.D., not a medical doctor) has a second excellent follow-up article, too.

This shoddy biased non-science could be considered as needlessly extending the time our societies are struggling with the virus, and resulting in enormous unnecessary extra lives lost (current count 470,000 dead).  Where’s the outrage? 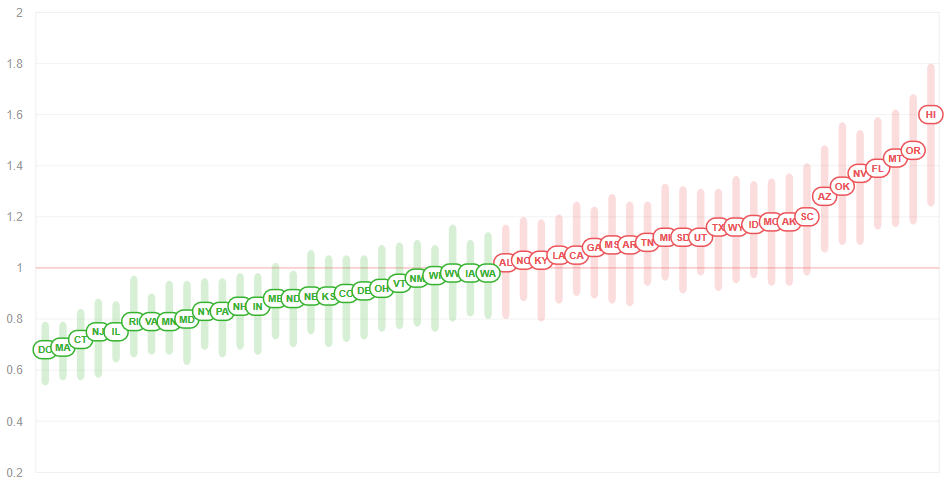 State by state, county by county, the US continues to loosen up on the various vague restrictions it formerly had in place.  At the same time, the excellent rt.live website now reports 25 states with increasing rates of new case counts every day.  The last three days have seen it counting 26 then 25 and again today 25 states with increasing rates.

To put that number into context, have a look at this second chart. 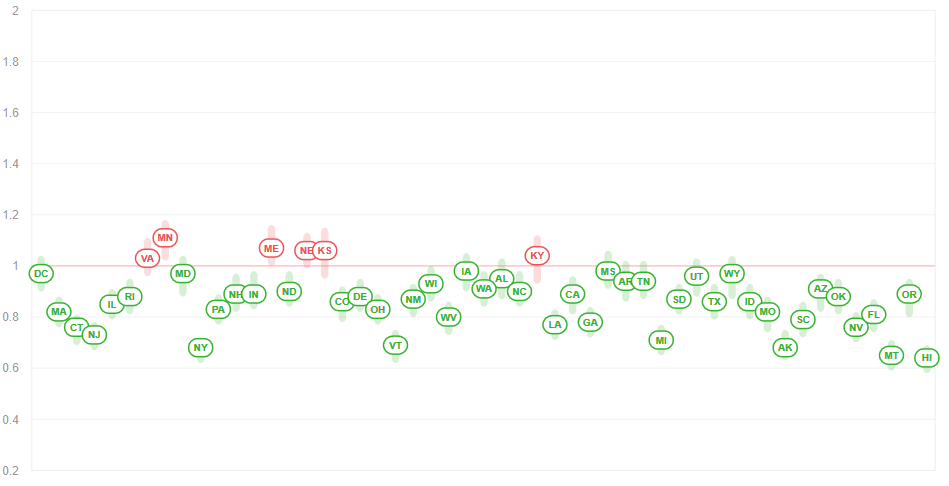 This shows the situation two months ago.  It is hard to see anything good in the change.

Another data point – currently IHME is predicting 201,129 deaths by 1 October, with an increasing death rate from mid/late July onwards.  Two months ago it was predicting 60,308 deaths. 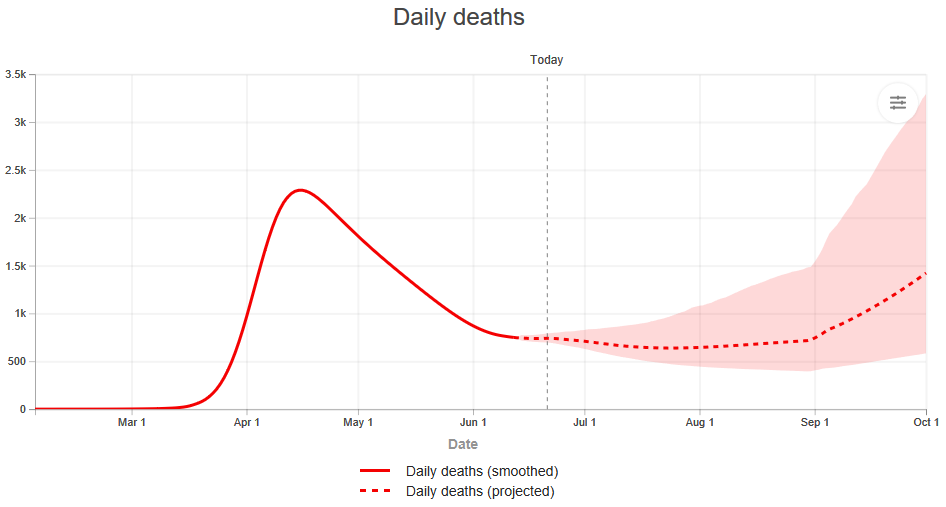 Now tell me, if you can, that we did the right thing by relaxing our restrictions.

New Zealand continues to struggle with its 14 day quarantine requirement on all arrivals.  It now has nine new cases of the virus, all from people coming in from overseas.

It is also discovering something that should have been obvious up front – if you are quarantining arriving people for 14 days, you’re going to need a lot of hotel rooms to accommodate them all.  It has run out of hotel rooms in Auckland, and now is even sending people, by crowded bus, 4 1/2 hours away to Rotorua to quarantine there.

The two lessons for the rest of the world are how difficult it is to keep the virus out of a country while still allowing even the slightest trickle of people in, and a reminder that until the whole world has been freed from the virus, everywhere is under constant threat.

The AMC movie theater chain decided not to require movie patrons to wear masks, so as to avoid “political controversy”.  How is the medical safety of moviegoers a political issue?

The company is trying to hide behind an excuse and avoid doing any “heavy lifting” by telling the truth to people who don’t want to hear it.  The benefit of mask wearing should be about as uncontroversial as anything can be, and the most distinctive thing about it is that if a person doesn’t wear a mask, they are not only increasing their chances of getting an infection, they are increasing their chances of then spreading it to other people.

The key thing about masks is that having two masks between you and an infected person does not double the safety.  It increases it massively more, because that is how the math works.  Say, for example, that maybe masks reduce infection rates by 80%.  You have two chances in then chance of getting infected in a given situation compared to an absolutely certainty of getting infected, in that same situation, without a mask.  But if both you and the infected person have masks, the risk reduction doesn’t go from two chances in ten to one chance in ten.  The risk goes from 20% to (20% x 20%) which is 4%, and now one chance in 25.

So, that other mask,  on the other guy, reduces your risk from 20% all the way down to 4%.  The person claiming the “political” right to accept whatever personal risk he wishes has no political or moral or any other type of right to increase the risk for you and everyone else five fold.

Apparently someone pointed this out to the fools at AMC, and on Friday afternoon they reversed their position and are now requiring masks.

As a quick aside, my daughter and I went out to lunch as a Father’s Day treat today.  I was appalled at the number of people not wearing masks now, even around food, and astonished to still see some people with a mask covering their mouth but not nose.

Here’s an interesting study, full of bad news if true.  The lead point of the study is that antibodies might cease to protect us from the infection after just a few months.

We know there are a lot of people anxious about taking a vaccine once one has been fast-tracked through the development and testing/trial stages.  Put us in that category of concerned people, too.

But now imagine something truly scary – a fast-tracked vaccine from China.  You’ll not find me lining up for a shot of that any time soon, even thought it might start becoming available in as little as three months from now.

Here’s a question we pondered at great length when first opening a box of masks.  Is there a right and wrong way to wear a mask?  We managed to puzzle out the top and bottom sides – the top side has the metal strip to conform it to your nose.  That was easy.

But is there a front and back?  One side is colored, the other side is white.  We decided that the lack of instructions on the box implied there was no difference, and intuitively it sort of seemed that there’d be no difference.  But we then came across this excellent discussion.

Would you wear one of these?  We’re not actually sure how effective it would be, because it is open at the top (and bottom).  But the point is somewhat moot, as we doubt we’ll ever wear one.

And lastly for today, thanks to reader Bill for some light relief – some “Dad” jokes.