Today saw us cross another milestone (probably not a good term – it implies progress) on the Covid-19 road.  The US passed the 100,000 mark for virus-related fatalities this morning.  Depending on your world-view, you might view that number as seriously overstated or seriously understated, but whatever the reality may be, can we agree the number is terribly high.

Do you remember back when the death numbers were in the low thousands, and projections were suggesting we might reach the terrifying total of 65,000?  Do you even remember when we passed through that range of numbers, and kept on going?  And now, today, 100,000 seems just like another day, with no clear end in sight (although happily, daily death rates have been appreciably declining for the last month).  Isn’t it amazing how the unthinkable becomes the ordinary.

I’m reminded of the people who, in the first few weeks of the outbreak, said with perfectly straight faces “This is a lot of fuss about nothing, we lose over 60,000 people to regular ‘flu most years, and we’ve barely lost 600 people to this virus.”  Did they not realize they were comparing a full year of ‘flu deaths with the first few weeks of a growing new disease?  It was a totally unfair and ridiculous comparison.

Astonishingly, some people are still spouting this type of nonsense.  Here’s an article by a person with an impressive set of credentials and career success, but in my opinion, he gets it completely wrong.

The article, only a couple of days old, hasn’t aged well.  The death rate he is quoting has increased by almost 50% between whenever the data was collected and the current numbers – he says 0.022%, currently it is 0.0304% and of course, tomorrow it will be more, and so on.  So that may invalidate much of his analysis and conclusions, but there is another point which has to be considered as well.

The second point is probably more significant.  He is comparing the death numbers for the two outbreaks, but ignores one huge enormous factor.  The Covid-19 numbers have been depressed and reduced because of the huge amount of social distancing and locking down that we’ve suffered for almost two months.  What would the Covid-19 numbers be without that response?  Surely, they would be much higher – no-one really knows how much higher, but at least twice as high, and possibly 20 times as high, depending on whichever model and projection you want to use.

The fundamental point is that for both these reasons, we can not compare annual ‘flu deaths with Covid-19 deaths.

His point about the majority of Covid-19 deaths being related to older people in care homes may still be valid now the numbers have grown by another 50%, but his attempt to compare care home deaths is made difficult because there is no matching statistic for ‘flu deaths, and simply looking at age related fatality statistics shows no discernable peak.  And his point that the entire country has turned itself upside down when 53% of deaths were suffered by 1.7% of the population may be valid, but we have no idea what the death rate would have been if we didn’t go into lockdown mode.

We can not use the number of deaths to date as an argument against the lockdown, because we don’t know what would have happened if we didn’t lock down.

Having just spent the last few paragraphs arguing against making comparisons, there is one comparison I feel should be made.  Not a comparison with the ‘flu, nor comparisons with our neighbors – Canada (44% as many cases and 58% as many deaths per head of population as in the US) and Mexico (11% and 21%).  Let’s not compare the US to the world averages either (14% and 15% of the US rates per million).  Obviously, such comparisons are deeply embarrassing to the US.

But cast your mind back to the early days of the virus when we in the rest of the world, relatively unscathed with very few cases and almost no deaths, were watching with amazement and horror as the numbers of cases and deaths were spiraling out of control in China.

China’s worst day saw 3,884 new cases reported, and the worst daily death count was 150 deaths.  For the last month, they’ve been having one or two new cases a day and almost never any deaths, and in total, they have reported 82,992 cases and 4,634 deaths, being rates of 58 cases and 3 deaths per million.  Several months ago, when every other country’s rates were lower than China’s, the Chinese numbers still seemed like they were low, but not extremely low.

But now, China’s rates are  little more than 1% of the US per million rates, and 12 times lower than the world averages.

How can that be so?  Is it at all believable?  Even the premise that China’s outbreak was almost entirely only in the Wuhan area is impossible to believe – why would it not have spread around China the same way it subsequently spread all around the world, especially in the first month or more while China was still pretending to itself as well as the rest of the world that nothing untoward was happening?  China’s population is very mobile these days, with a growing number of flights and high speed trains connecting Wuhan to every other part of the country.

Remember the story about the discontinued phone lines – the mysterious closure of 21 million cell phone accounts and 840,000 landline accounts in China over the first three months this year.  For a country with a slowly growing population and a steadily increase in personal wealth, it would be expected that phone account numbers would be steadily growing, not shrinking.  Does this mean that somewhere up to (say) 20 million people have died?

That also seems unlikely.  We really don’t know what is happening in China at all.  But with every passing day, their numbers look less and less credible.

To put those numbers into context, the death rates per million in the US/Canada are 304/176.  The world average (not a very reliable number) is 45.2.

Hello, South America!  Chile and Peru have been racing up the scales, and today displaced both UK and Italy.

Break out your measuring tapes, men.  No, not for that.  Measure your ring and index fingers – there is a suggestion that the relationship between them, and the underlying causal factor of testosterone, might predict your risk of dying if you get the virus.  Emphasis on the might.  But it is an interesting exercise.

The PR drug, remdesivir, has scored another “victory”.  The UK Health Secretary has described it as “the biggest step forward in the treatment of coronavirus since the crisis began”.

Really – the biggest step forward?  This is a drug that has not been shown to save any lives, merely to shorten the time that people (who are going to survive) spend in hospital, by three – four days.

But while there is no evidence of lives being saved (as this article concedes), apparently Dr Griffin from the Univ of Leeds hasn’t got that memo “We can instead hope for improved recovery rates and a reduction in patient mortality, which we hope will benefit as many patients as possible.”  [my emphasis]

How is it that some prominent members of the medical profession are simultaneously woefully ill-informed and yet so eager to share their erroneous opinions?

Here’s an interesting article all about fishing.  But it has a clear lesson for us when considering virus statistics – it shows how identical data can be interpreted in two different ways to get an almost 15 times different outcome/conclusion, both of which are considered valid by their supporters.

The numbers of US air passengers over the Memorial Day weekend are now in.  Monday saw the highest percentage of last year’s passenger numbers since 23 March (13.6%) and Friday saw the largest actual count of people flying (348,000 compared to 2.8 million last Memorial Day Friday). 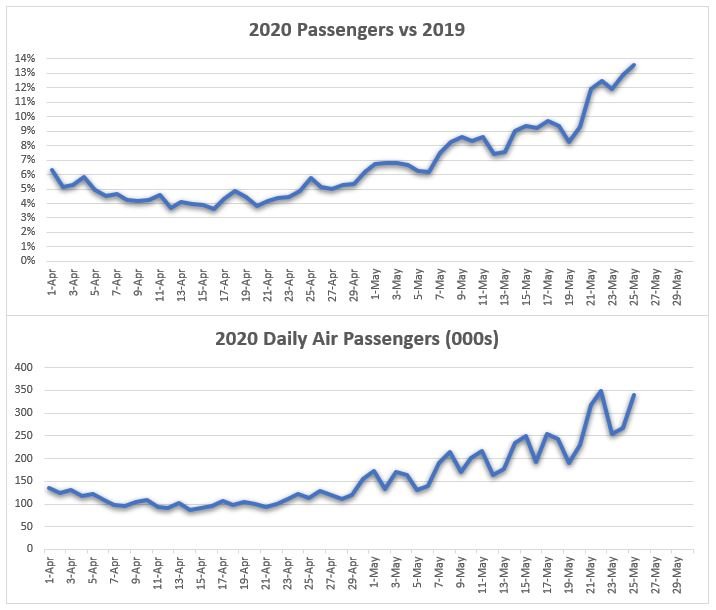 It will be interesting to see if travel numbers say at these levels or if they grow/shrink.  My guess is a slight drop back but then a continued slow but steady growth.

People are traveling at almost four times the number they were at the lowest point in mid April (lowest count on 14 April, lowest percentage on 16 April).

Some disappointing news.  Avigan (generic name favipiravir) had been hailed as a promising treatment/cure for the virus.  It is made by, of all companies, Fujifilm, but has failed to meet its target outcomes.  More trials are being continued, but it is no longer as exciting a hope as it had been.

We don’t entirely understand the returning confidence to the markets, but are happy to see it.

We’re not entirely sure how we feel about this.  But if we had to choose between people without masks shooting people who asked them to put one on (as has sometimes happened), and people with masks aggressively screaming and yelling at a person without a mask, we think we prefer the latter.  But can you rationalize “the nobility of mankind” with the scene in this short video clip?