Here’s a good article that summarizes two thoughts I keep coming back to.

The first is our response, in the US, to the coronavirus threat is being handicapped by politics and by political correctness.  The second is that we need to respond to the virus threat in a smart selective manner, rather than in a stupid “one size fits all” manner.

To put those numbers into context, the death rates per million in the US/Canada are 302/174.  The world average (not a very reliable number) is 44.6.

Here’s an article that has me rolling my eyes uncontrollably – but understandably because the villain in the piece is the despicable WHO and the subject is hydroxychloroquine.

WHO has terminated trials of HCQ due to “safety concerns”.  This is really peculiar, because WHO, many years ago, added HCQ to its list of (currently 460) essential medicines that are considered to be most effective and safe to meet the most important needs in a health system.

So WHO have now simultaneously deemed HCQ to be safe – something borne out by the millions of people who take it every day for lupus and arthritis, and the millions more who sometimes take it as a malarial prophylactic in areas where the malaria isn’t HCQ-resistant (and now it is being featured in a Diabetes trial too); but simultaneously has decided it is too dangerous to use in a Covid-19 cure trial (apparently after misunderstanding the article in The Lancet).

Who could not see the contradiction in those two declarations about HCQ?  Only WHO.  (Not a pair of sentences that would make sense if read aloud!)

Here’s an article we don’t entirely agree with, although the phrase “the real virus was the panic virus” is too good to pass over and not quote.  Anyone is entitled to their opinion of course, but just because someone won a Nobel Prize in chemistry does not make them an expert in medicine or epidemiology.

On the list of problems to have to resolve, we think this is probably one we’d be delighted to struggle with – a group of scientists working on a vaccine say it may be hard to test the vaccine because there are not enough new coronavirus cases in the UK.

If they really think they’ve a promising vaccine candidate, maybe they should test it in the US instead.

Here’s yet another story pointing out the inability of our states to accurately count and report the number of virus deaths.

Lufthansa and the German government have agreed on a €9 billion bailout for the troubled carrier, although it remains to be approved by the European Commission (and the airline’s shareholders).

It is a difficult but not impossible mission for a country to support its national flag-carrier without running afoul of EU rules, but like so much in the EU, the rules are one thing and the observed reality is frequently entirely different (just look at Italy and its ongoing support of Alitalia).

In the case of Lufthansa, the support is in the form of the government getting a 20% stake in the firm, which it says it plans to sell by the end of 2023, and hopefully for a profit.  So it isn’t an outright gift, it is instead a commercial investment, we are told.

Nonetheless, the move is another case of governments picking winners and losers, and of supporting weak airlines while leaving strong airlines to fend for themselves.  Not exactly a recipe for fair competition.

An American actress who I’m happy to say I’d not heard of before and hope not to hear of again showed a picture of herself on social media wearing a crochet mask, leading some to imply that her IQ was less than her bust (or any other measurement) size.  After being roundly criticized for proudly showing off a total nonsense of a mask (due to its huge holes) with memorable phrases like “it is as helpful as a screen door on a submarine” she claimed there was a carbon filter hidden inside the mask.

Maybe there was, but if so, it seems the filter is likely to be inadequately sized, meaning most of the air breathed in and out would go around the filter and through the crocheting rather than through the filter.  We really do not like the trend to “making your own masks” because so many of them are so ineffective and are fashion statements and conspicuous displays of “social awareness” rather than valid medical devices.  We’ve also read of “scientific” masks that are easier to breathe through.  In other words, the have less material and so are less likely to trap tiny virus particles. 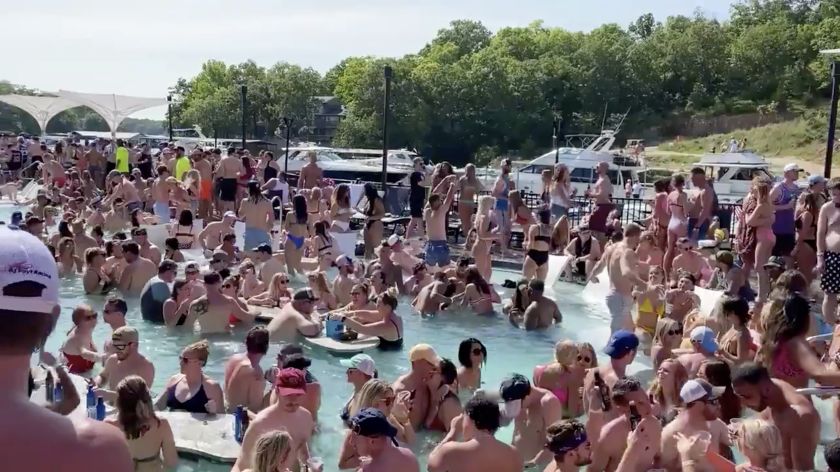 As the Memorial Day weekend draws to a damp close (it rained here on Friday and Saturday and again today), many people blessed with better weather celebrated by abandoning all thought of social distancing.  In addition to the image above (taken in the Ozarks yesterday) here’s one of the more measured collections of photos, showing some appropriate and some wildly inappropriate activities.

One wonders if we’ll see a rise in new cases starting from the end of this month.  It seems unavoidable for elevated levels of virus transmission at places like the picture above, but with the very imprecise measuring of virus cases, it may or may not appear either in new case counts or even in death counts.  As discussed yesterday, deaths and in particular the reporting of them are spread out so broadly that it is hard to match a specific event with deaths at any specific subsequent time.

We seem to have two problems.  The first is the growing number of thoughtless people who don’t understand that their own ignoring/breaking distancing requirements endangers not only themselves but other people too.  That is disappointing, but idiots around us is a fact of life.

More disappointing is the failure of the people charged with the responsibility to enforce these distancing requirements refusing to do so.  This article is an excellent read about the difficulties of a small restaurant owner, and includes this line

Often, when things have been at their worst here, our town’s police officers have walked by, seen what’s happening, and said and done nothing.

As I repeatedly and ruefully observe, our problem is not so much the virus as it is ourselves and our dysfunctional response to it.

I felt very self-conscious the first few times I wore a mask; now I do so without feeling so self-conscious, while still, every time I put it on, wondering what has happened to the world and when/if it will ever return back to normal.

While I’m probably close to max on the “not very social” scale, even I find that many of life’s pleasures involve being close to other people, and being unable to do so now, other than with a frisson of fear and masks all around, is terrible.  You know this, too.

But while I’ve become inured to the unfortunate need for masks, and no longer feel self conscious, I’m really not sure if I’m willing to go the next step and consider a face shield.  This article seems to be gently breaking the news to us that they might become the next necessary thing.  If nothing else, it is hard to reconcile the twin concepts of it becoming “safe” to relax our lockdown rules with consideration now being given to recommending face shields.

What will be next?  Full on “space suits”?

I listened to a lovely two hour very gentle interview of the Prince of Wales on Classic FM earlier today.  I was astonished to learn just how close our musical tastes are, and he was able to speak quite sensibly on many aspects of classical music.  Tomorrow (Tuesday) at 3pm Eastern/noon Pacific time he’ll be on Classic FM again, this time as a presenter rather than an interviewee.  It will be interesting to hear him again and see what music he chooses to present.

Today included the wistful longing Prelude (but, alas, not the often paired searing Liebestod) to Wagner’s tragic love story, Tristan und Isolde, Wagner’s Siegfried Idyll (which Prince Charles got to conduct, himself, as a birthday present to his wife – being a prince clearly has its privileges), the fourth of Strauss’ Four Last Songs (my favorite is actually the third, but the fourth is a very close second – they are included in my recommended selections) and two pieces of Bach.

All quite highbrow.  Good for him.