Have you noticed the latest buzzword that is being used everywhere?  “Epicenter” (or, for our very good friends elsewhere, “epicentre”).  Originally used to refer to the point on the earth’s surface vertically above the focus of an earthquake, the word has broadened to now mean the central point of something, typically something unpleasant.

That’s okay, but the virus-related meaning seems to mean “anywhere in which the virus case numbers are growing”, and it has become simultaneously a term used to express exaggerated concern, and also even adopted as a badge of honor by the place in question.

Rather than being the central point, it has come to mean any region of any size.  New York (city or state) has often been labeled the epicenter.  The entire north and south American continents was called the epicenter by UPI and WHO a couple of days ago, noting that the former epicenter was all of Europe.  ABC drills down and dubs Brazil as the new epicenter, replacing the US.  I guess that makes it the center of the center.  Apparently there’s another center within the center of the center – Sao Paulo, also dubbed an epicenter.

Five days ago, LA County was named the epicenter by the LA Times.  So too is Montreal.

Another application is not to a geographic place at all, but to a concept or thing – nursing homes were named the epicenter in this article.

I could continue, but I think you get the idea.  “Epicenter” is a lazy word used by reporters trying to make their story seem more important than it actually is.

The world total for reported cases has now passed through the six million mark. 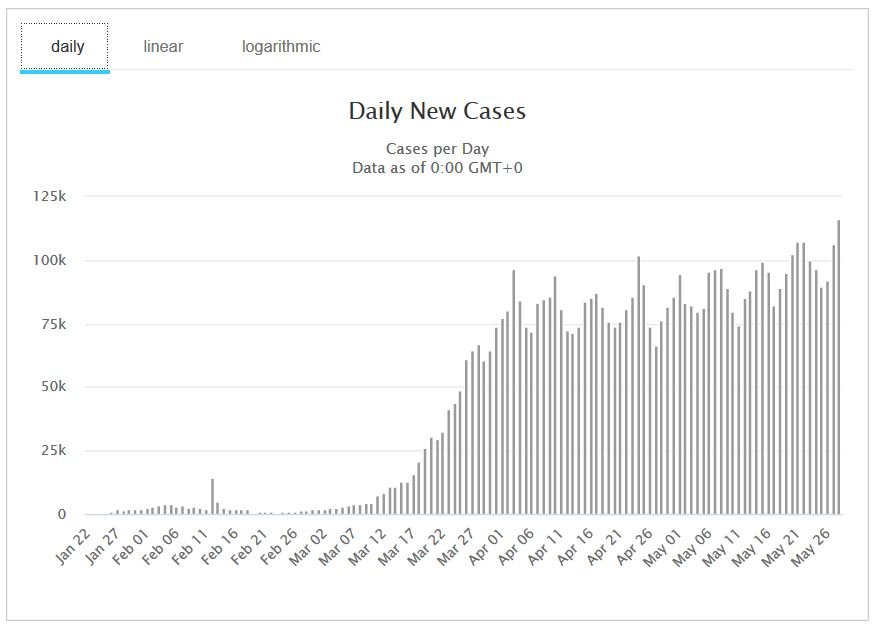 As this chart shows, globally the number of new cases reported every day, while no longer skyrocketing up like it did in March, is still slowly climbing.  As fast as the virus gets semi-controlled in one country, it surges in another.

The controversial hydroxychloroquine study reported in The Lancet has just taken a very strange turn.  We came up with some points of concern with the study, other people have also identified weaknesses and lack of disclosure with the data released, and now, it turns out the study included 4,402 patients in hospitals in Africa but this number seems impossibly high.  In total, at the time of the study, there had been 15,738 cases reported in Africa.  Not all were hospitalized, not all were still hospitalized, and of course, a few had died as well.  Additionally, it goes without saying that not every hospital in every one of the 52 different African countries was participating in the study.

The suggestion is that maybe there never were 4,402 hospitalized patients, and unfortunately the study doesn’t provide any information about the numbers of patients, the countries they were in, or the hospitals they were in, so there is no way of confirming this.  “Trust me, I’m a doctor”, I guess.

Talking about trust, the new CEO of United Airlines – Scott Kirby – tells us that flying is safe, even without social distancing on board.

Yes, we’ll be happy to believe his claim.  But only after he agrees to do all his future flying in a middle seat sandwiched between two fellow passengers.

I’ve noted a gradual trend on the Rt.live website this week, showing more and more states possibly moving from “case rate reducing” to “case rate increasing” status – ie from green to red in the chart.  This is not necessarily as significant as it may seem – as you can see, just about every state’s zones of uncertainty span both positive and negative growth zones, and while the two zones of uncertainty are shown as 50% and 90% on this chart, the usual convention is to use a 95% zone of uncertainty.

The 90% zone means one chance in ten of being wrong, and with 50 states, five of the states may have values somewhere outside of even the pale shaded areas.  So it is way too soon for any sort of anxious conclusions.  But the shift from green to red is a point of note.

We were surprised and encouraged to see that Southwest Airlines plans to be back to operating its full schedule by the end of this year.  We’ll believe it when we see it, and probably the reason is that Southwest has a habit of trying to be the first airline back after a slowdown – it believes it can grow its market share in such cases by beating the other airlines to returning to full service.

One point in Southwest’s favor – we expect domestic travel and shorter flights will return back to previous levels more quickly than longer and international flights.

I visited Costco earlier today and have become so accustomed now to not seeing samples on offer that I didn’t even notice their absence this visit.  However, accustomed or not, it is great to read the samples might be returning soon, and we’re curious about what their new approach to samples might be.

Never say never, particularly when it comes to the government spending money.  Senate Majority Leader Mitch McConnell says they are considering a fourth and final bailout bill.  We doubt it will be the final bill; even if things quickly return to normal (which we doubt) we expect there’ll be all sorts of new economic stimulus measures being subsequently promoted.

As we’ve said several times before, we’re very concerned at seeing anyone make any sort of face covering out of any sort of material and then sell it as a protective mask to reduce the risk of sharing virus particles.  We’d love to see the FDA or some other test or regulatory body get involved in rating/certifying the efficacy of these masks, because we suspect many of them are of very little benefit.  Some people seem to think that all face coverings provide equal protection – that is absolutely not the case.

An extreme example today was United Airlines’ announcement that they’ll be recycling old used/worn uniforms into face masks.  Sure, reusing fabric that was going to otherwise be thrown away lowers the cost of making masks, but is it the best material for filtering out the teeny tiny aerosolized virus particles?

We’d said above in the “I am not a Doctor” section we’d believe the new UA CEO’s statement that flying is perfectly safe, even when squashed into a full plane, when he starts flying in middle seats himself.  We should add – “…. and wearing a mask made out of an old threadbare staff uniform”.

We struggle to avoid the association of this concept with, ahem, attractive young ladies who offer to sell certain used items of clothing online…..

Okay, so we concede that not all masks are as good as all other masks.  But we’re not sure this Texas Bar’s decision to refuse admission to anyone wearing a mask is the appropriate response to that issue.

The Dow continued to do not very much today, with another tiny drop.  Today it dropped 0.07%, which translates to 18 points and a close at 25,383 for the day and week.