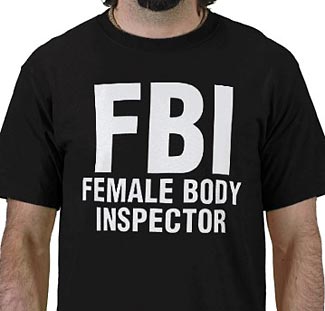 JetBlue’s Panties Police launched a sudden raid on a flight departing La Guardia last week, and demanded to see what a woman was wearing underneath a long baggy blue t-shirt that went down well below her waist.

The JetBlue employee – a male counter supervisor named Victor Rodriguez who apparently wished to become an ‘FBI’ agent (see image alongside) – confronted 27 year old Malinda Knowles after she had sat down on the flight, and demanded to see what she was wearing underneath her t-shirt and apparently thrust a walkie-talkie between her legs to help him better appreciate understand the situation (did it have a hidden camera on it, one wonders?).

But wait, this is just the start of the story.  Not satisfied with his walkie-talkie inspection, the supervisor then had police take the woman off the plane for further investigation.  Upon getting her onto the jetway, New York’s sharp-eyed finest observed she was wearing shorts underneath her t-shirt, and after demanding to see her driver’s license so they could ‘file a report’, allowed her to reboard the flight.

But wait, there is still more (and by now, these events had already delayed the flight 30 minutes).  Ms Knowles was just getting settled and waiting for the flight to finally depart when the police returned, this time to remove her from the flight for ‘being unruly’, at the request of the captain.

The lady passenger denies being unruly, and says she never even saw the captain, who was in the cockpit at all times.

The walkie-talkie toting panty inspector told Ms Knowles that she wasn’t complying with the rules, but was unable to explain which rules she had broken, and allowed her to take a later flight.

So Ms Knowles is suing the Panty Patrolman/Supervisor Victor Rodriguez, the captain, and Jetblue.  Let’s wish her the very best of good fortune, and may appropriate bad karma descend heavily upon Jetblue and its ridiculous supervisor and his partner in crime, the compliant captain.  Their actions embarrass and shame good airline employees the world over.

Jetblue is refusing to comment about the matter – which at least is one step better than automatically repeating a nonsense story about how ‘For the safety and comfort of passengers and crew the captain of a flight chose to ask a female passenger to leave the plane…..’

Noting as how ‘FBI’ agent Vic still has his job, if you should happen to see him at LGA, perhaps you should volunteer him a quick peek so as to prevent any problems subsequently.  I’m sure he’d appreciate your courtesy.

A Broader Issue of Concern to Us All

This regrettable incident is merely the tip of the iceberg.  How many times have we read about passengers being taken off planes for ‘being unruly’.  When making such accusations, and taking such actions, airlines should be compelled to involve every passenger from several seats all around the allegedly unruly passenger, with all those passengers not just giving statements but being required to sign complaints about the alleged unruliness.

The current situation, where a captain in the cockpit can say ‘I am god, and she is unruly’ and have the police obediently do whatever he says, with no supportive testimony from unbiased other passengers, is being roundly and regularly abused and must stop.

We all know – instinctively and from occasional confirmed examples that make it into the general news flow, (and hopefully not from personal experience) – how police may on rare occasion beat a suspect up and then say it was unavoidably done while the suspect ‘resisted arrest’ (and maybe lay more charges against the hapless individual – ‘I hereby charge you with assaulting my nightstick’), and do so free of much second guessing.  The same thing seems to be happening where pilots and their cabin crew can concoct ridiculous lies about passengers and have the police then go along with their lies.

Many of the claims of course end up with no charges being filed – which is correct, because the claims are often ill-founded.  But even if the victimized passenger doesn’t end up facing charges, at the very best they’ve been publicly shamed, and have missed at least one flight.

They may have also had a terrifying experience with hostile police, and might find themselves banned for an unknown time from ever flying on the offending airline again, all for no good purpose and from no due process.  Meanwhile the pilot and crew that visited such misfortune on the almost-passenger have flow away, laughing to themselves, and facing no negative consequences at all.

What is at stake here is a lot more than a possibly low priced air fare.

We might end up having to pay a great deal more for a last minute one-way alternate fare on another carrier.  Being banned from a carrier that has the largest market share in our home market can be a major inconvenience (and what about any frequent flier miles we have with that airline).  We might miss an essential high priority appointment/meeting/event.

And don’t forget some hours of extreme aggravation and potentially huge liability, all because some airline employee capriciously decided to get in our face and ruin our day.  Maybe we even need to pay for a few hours of an attorney’s expensive time, and possibly also experience an arrest and time in the cells.  In such a case, and even if nothing further proceeds, we then have an embarrassing arrest record in our file that we’ll need to explain time and time again when applying for jobs, for credit, to rent apartments, and who knows what else (always assuming we’re given the chance to explain, rather than just mysteriously finding it harder to get good jobs).

There’s even more.  It isn’t just one’s criminal record that gets damaged.  One’s increasingly public record also is harmed in an unbalanced way.  We all know that newspapers rush to print exciting stories about people and the charges that are initially laid against them, but how often do the newspapers then print ‘police dropped all charges’ and/or ‘the accused was found not guilty at their trial’?  So anyone doing a Google or other internet search may come up with newspaper accounts of the initial incident, but won’t necessarily see whatever final outcome occurred.

Besides which, many people, whether consciously or unconsciously, have a ‘where there’s smoke, there’s fire’ approach to interpreting such things – people think that obviously the accused must have done something wrong, or else they’d not now be facing charges.  In English law there’s a famous admission by a judge who, as I remember back decades to my law school days, said something like ‘I know about the presumption of innocence, but you stand before me now, accused by the police, of committing this crime.  And, as far as I am concerned, the police are honest, experienced and capable.  They would not have brought this charge against you if they didn’t have good reason to do so.’

In other words, whether publicly expressed or not, we all have more of a presumption of guilt rather than innocence – for example, didn’t you find yourself cynically wondering what Ms Knowles had done to cause the Panty Policeman to act the way he did?

We need to recapture fairness and due process.  You and I would suffer consequences if we lodged false complaints about people at random; airline employees should be held to at least that same standard and ideally to a higher standard, due to the greater negative consequences of their actions.