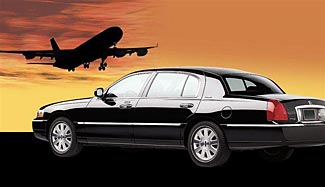 Thanks to everyone who answered the survey about the distance at which you'd switch from driving to flying.

The answers were surprisingly broadly spread all the way from the people who'd drive no more than 150 miles to the people who would drive 1000 miles or more, and avoid flying whenever possible.

As you can see below, the halfway point where as many would drive as fly more or less came at 350 miles.

This is actually significant, because generally the time crossover point – ie the time at which it becomes quicker to fly rather than drive – is much shorter than that, more like 200 miles.  Yet at the 200 mile point, 85% of readers are still behind the wheel, rather than taking a plane.

At 300 miles, 53% of readers are still driving rather than flying.  And there are 10% of readers who dislike flying so much, they'll avoid traveling, or go days by car, rather that take a flight. 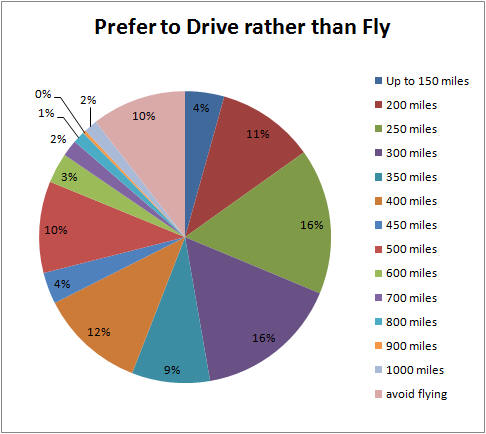 What does that mean to the airlines?  It means – as I'd suspected last week – there's a huge concealed potential market of lost travelers; people who'd rather drive all day in a car than take a half day plane journey somewhere.  Look again at the pie chart – a full day of driving is probably 500 miles or so.  There are still 25% of readers avoiding flying when confronted with traveling that sort of distance.

If an airline wanted to grow, it simply needs to transform its flying experience into something more welcoming, more sane, and less adversarial.  For a flight of 500 miles, they could grow by 33% just by taking the hidden balance of 'their share' of people who prefer not to fly at all, and in reality, they could grow a huge deal more than that by scooping up the 25% of each other airline's share too.

Does that sound crazy to you?  If so, I have two words to say in reply :  Southwest Airlines.  They started business by offering a series of positive, affordable, friendly, short-haul flights.  It was only very much later that they started to expand into longer and longer stage lengths, and their whole route structure, even now, still reflects their origin as a point to point (rather than hub and spoke) airline.

As you can see, we have a new supporter of the newsletter this week, Booking Wiz.  I'll feature what they consider to be good travel deals for a few weeks.  If you find them to occasionally be good value, and the ad not too offensive, I'll continue featuring it.  But if there's nothing particularly special about the deals, I'll stop providing them.

What else this week?  Virgin America rushes in to take over a gate at O'Hare, and will start off with five roundtrips a day between O'Hare and LAX/SFO.  Play a fascinating Facebook game to possibly win a free trip for two to Britain.  The introduction of Verizon's iPhone has been greeted with marketplace apathy rather than marketplace excitement.

Don't buy the reviewed 'Paper Shower' product but do consider the feature article of the week – a two part series reviewing the Netflix video streaming service.  As you'll see from the intro to the series shortly, I'm tremendously excited by this service.  It is extraordinarily good value, easy to use, involves no contractual commitment and, golly, there's almost nothing bad to say about it.  You really must try it yourself.

Talking about phones, here is an excellent commentary on the implications of Nokia dropping its own smart phone operating system in favor of Microsoft's Windows Phone 7.  The strangeness of Nokia's actions continues to puzzle me, because I can't see any upside at all to what they announced last Friday, just a whole ugly mess of downside.

And security?  Here's an interesting item that opens with the story of how two TSA luggage screeners are known to have stolen at least $160,000 in cash from passengers' checked bags.  But don't stop reading, keep on going down to read about some of the other problems the TSA is having as well.

And here's a fascinating detailed account of the assassination of a Hamas terrorist a year or so ago, possibly by a team of Mossad agents, or so the Dubai police would have us believe (the far from impartial nature of the source of every part of this story means you should take everything with a grain of skeptical salt).

As travelers, you might take particular note of how readily the assassins gained entry to the victim's hotel room, and how they even managed to lock the door behind them (ie putting on the security chain) after they had exited the room – making for what was almost a perfect crime where the victim dies inside a locked-from-the-inside room.

Please note that I've allowed myself to be talked into taking my six year old daughter to Disneyland next week.  Three days of standing in interminable lines and trying to feel good at paying ridiculously inflated prices for everything.

Last time we stayed at the nearby hotel, I had awful internet connection problems, but hopefully this time will prove more conducive to getting material out to you in a timely manner, but no promises.  What's that?  Why am I returning back to a hotel I had problems at last time?  Ah well, that is alas part of the total Disney experience for Anna – she loves the two room suite and in particular the bunk beds in her room.  What is mere internet access for me, compared to bunk beds for her?!

And talking about hotels, I'll be sure to be very wary of anyone who calls me in my room.  I'm not all that gullible, and for sure desperately hope not to end up like this poor trusting soul in Vancouver (a must read item).